WMO’s annual report indicates a bleak climatic future that requires urgent action lest the loss of life and immense economic damage. Climate change is the difference in the statistical distribution of weather patterns that last for an extended period of time. Global warming is the...

Climate change is the difference in the statistical distribution of weather patterns that last for an extended period of time. Global warming is the observed century-scale rise in the average temperature of the Earth's climate system and its related effects. Climate change poses a fundamental threat to places, species and people’s livelihoods. Sea levels are rising and oceans are becoming warmer. Longer, more intense droughts threaten crops, wildlife and freshwater supplies. From polar bears in the Arctic to marine turtles off the coast of Africa, our planet’s diversity of life is at risk from the changing climate.

The World Meteorological Organisation (WMO) is an intergovernmental arm of the United Nations is concerned with the world’s climate as well as natural disaster risk reduction stemming from climatic conditions. Annually the WMO publishes “Statements on the status of the world climate,” that outlines global, regional and national temperatures, as well as extreme weather events. It also provides long-term climate change information in order to outline prospects for further climatic conditions.

The Paris Agreement is an agreement within the United Nations Framework Convention on Climate Change (UNFCCC) dealing with greenhouse gas emissions mitigation, adaptation and finance - starting in the year 2020. The Agreement aims to respond to the global climate change threat by keeping global temperature rise in this century well below 2 degrees Celsius above pre-industrial levels. The US, a large polluter, has withdrawn from the Paris accord. 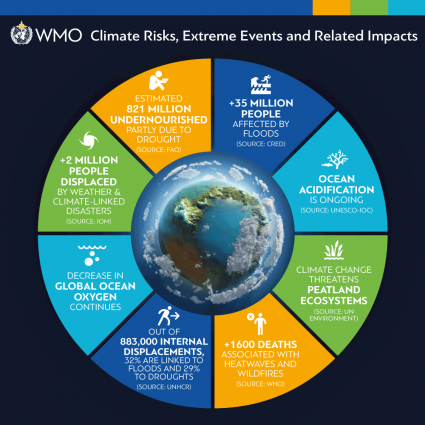 The WMO recently released their annual Statement on the State of the Global Climate in 2018, which outlines record sea level rises, as well as “exceptionally high land and ocean temperatures over the past four years.” The report estimates that this warming trend is expected to continue. Marking 25 years of publishing, the report underlines and raises the evolution of climate science to the robust, authoritative, evidence yielding machine it is today, bolstered by modern technologies and methods.

Using climate indicators of ocean heat, sea levels, ocean acidification, sea ice, ice sheets and glacial retreat, the Statement paints a bleak picture of the world’s climatic future. In 2018 alone, the report found that 62 million people were affected by extreme weather and climatic events. The majority of these were a result of flooding, affecting 35 million people. Simultaneously, heat waves have affected more people, including causing devastating fires, than at any other recorded moment, a result of increasing frequency and intensity. Increased variance in climatic conditions, coupled with extreme weather, has affected food production capabilities around the world. This comes amidst a worldwide drive to end malnutrition. Food security concerns grow as new evidence suggests an increase in world hunger. Out of all the displaced persons around the world, 2 million people were displaced as a direct result of disasters linked to weather and climatic events. Air quality and related health parameters have also taken a hit, aggravated by climate change. All these focus on issues that directly pertain to humans, without focusing on the environmental impacts associated with climatic conditions. From coral bleaching to threats to peatlands, to loss of flora and fauna, as well as increased losses of animal species and lives, environmental impacts are of particular concern.

The Paris Agreement was a momentous step towards a serious effort to tackling climate change. However, the withdrawal of the United States from the pact diminishes the importance placed on the Agreement, a result of its normative and polluting primacy. In addition, various parties continue to voice reservations over whether man has anything to do with creating climate change or if it is a result of natural processes. Within a democratic debate, these voices are given space, donating a spectrum of credence, which continues to gain momentum. However, there is a reasonable consensus amongst most of the worlds’ powers that man has donated to climate change. Despite this, trends of climate change and current loss of life indicate that unless a massive change is created, economic and human losses will be immense.

Our assessment is that climate change will continue to dominate humanitarian and economic concerns in the upcoming year. We believe that while potential exists for concerted action, consensus building is the first normative step to be undertaken to fight misinformation about matters related to climate change. We also believe that living within one’s requirements, abstaining from copious excesses, will go a long way in undertaking an individual role in climate action.