A win for Hezbollah?

The leader of a Hezbollah, a Shi'a Islamist political party and militant group, has declared “victory” after the latest Lebanese parliamentary elections. Hezbollah..

The leader of a Hezbollah, a Shi'a Islamist political party and militant group, has declared “victory” after the latest Lebanese parliamentary elections. Hezbollah is backed by Iran, and has an adversarial relationship with Israel. These elections were the first since 2009.

Originally a part of the Ottoman Empire, Lebanon was officially formed in 1920 after France was granted the mandate for Lebanon and Syria. France granted Lebanon independence in 1943. Lebanon was wracked by civil war from 1975 to 1990. Syria and Israel invaded the country during this period. Israel finally withdrew in 2000, and Syrian troops withdrew under international pressure in 2005.

Lebanon has a high literacy rate and has traditionally been an important trading hub in the Middle East. The country has a free market economy and is primarily service oriented. Today, Lebanon has a population of approximately 6 million, 95% of which is Arab. The country has a Muslim majority of 54% (27% Sunni, 27% Shia), however Christianity is a significant minority, practiced by 40.5% of the population.

Hezbollah, which means “Party of God” is a Shi'a Islamist political party and militant group based in Lebanon, where it wields considerable power. Hezbollah emerged with the help of Iran during the Israeli occupation of Lebanon in the early 1980s. Hezbollah is linked to the Islamic Amal movement, a Lebanese Shia militia supported by Iran’s Revolutionary Guards. However, its roots can be traced back to the Shia Islamic revival in Lebanon in the 1960s and '70s. The group has been headed by Secretary-General Hassan Nasrallah since 1992. It has significant military capabilities and played an important role in the 2006 war against Israel, when it was aided by Iran.

Hezbollah is considered a terrorist organization by the governments of the United States, Israel, Canada, Gulf Cooperation Council, along with its military/security wing by the United Kingdom, Australia and the European Union. Last year, the Arab League, which includes 22 Arab countries in and around North Africa, the Horn of Africa and Arabia, condemned Hezbollah as a terrorist organisation. Bahraini Foreign Minister Khalid bin Ahmed Al-Khalifa claimed that Lebanon "is subject to full control by this terrorist group." Read more here. 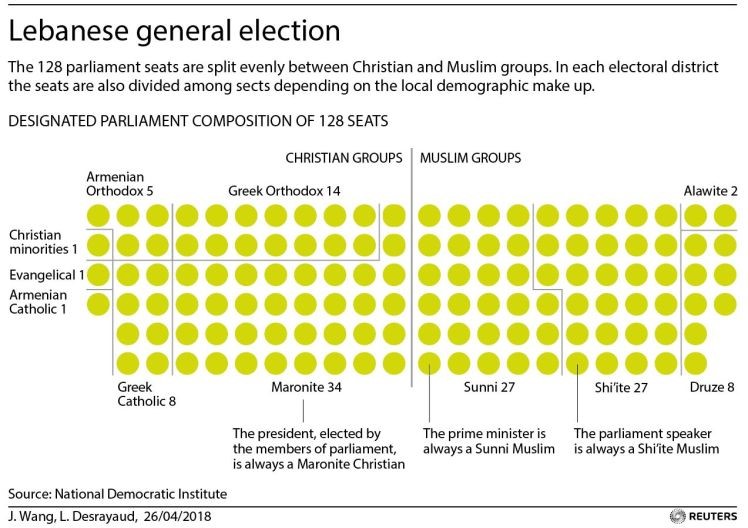 On 6th May, Lebanese citizens voted in the first parliamentary elections in almost a decade. Hezbollah leader Hassan Nasrallah has said that the results were a "great political and moral victory for the resistance option that protects the sovereignty of the country".

While the number of Hezbollah MPs remained relatively the same, its allies made significant gains. According to reports, Hezbollah and its allies won approximately 65 of the 128 seats. Parliamentary seats are split on a sectarian basis. The President is a Maronite Christian, the Prime Minister is a Sunni Muslim, and the Parliament speaker is a Shi’ite Muslim. The next cabinet will likely be a unity government that includes Hezbollah.

Hezbollah-allied winners included Jamil al-Sayyed, a former Lebanese intelligence chief who reportedly has ties to Assad. Hezbollah is allied to the Shi’ite Amal Movement and the Christian Free Patriotic Movement. Current Prime Minister Hariri’s Future Movement party lost one third of its seats, from 33 to 21. Hariri blamed his loss and low voter turnout on the new, complex electoral law. Only 49.2% of eligible voters participated in the polls, a drop from 54% 9 years ago. The right-wing Christian Lebanese Forces emerged as a major winner, with 15 seats.

Commentators have pointed out that these results indicate that Iran is solidifying its foothold in the country. Israel, however, feels threatened by Hezbollah’s resurgence in Lebanon. Israel's Minister of Education Naftali Bennett said, "Hezbollah = Lebanon. The state of Israel will not differentiate between the sovereign state of Lebanon and Hezbollah, and will view Lebanon as responsible for any action from within its territory."

“Hariri is going to be further weakened in any kind of government going forward,” said Washington Institute analyst Andrew Tabler. “His ability to substantially tame or restrain Hezbollah... in Lebanon is going to be very limited.”

Iranian Speaker Ali Larijani praised the outcome, which he said signified a “no to the US and no to Zionists”. He claimed that the results were a response to Israel and Iran’s hostile policies towards Lebanon. Lebanon, which receives US military support, also relies on foreign aid and loans to cope with issues such as the influx of 1 million refugees from neighbouring war-torn Syria. Lebanon also suffers from rising debt, decaying infrastructure, poor public services and high unemployment.

Our assessment is that the outcome of the Lebanese elections may add to tensions between Iran and Israel. The victory of the pro-Tehran Shi’ite Hezbollah may be a symbol of Iran’s regional clout.  Israel is already on edge due to Iran’s presence in Syria, where Israel has targeted suspected weapons shipments to Hezbollah. Hezbollah’s rise in influence could bring with it a number of complexities, including a rise in Western suspicion. We believe that Lebanon may have to take precautions in order to avoid involvement in another regional war.

One key question moving forward, is whether Lebanon will be an Arab or a Persian country.