WHERE IS THE INDIAN RUPEE HEADED?

It was a ‘Black Tuesday’ when India's partially convertible Rupee ended trading weaker and breached the Rs 80 to the dollar mark. Spurred by the unloading of Indian assets by foreign investors, the Rupee had reached a historic low point in its history. Can the fall be arrested?

Between 2000 and 2007, the Rupee stopped declining and stabilised. In fact, by the end of 2007, the Indian Rupee seemed to have stabilised at a respectful 39 to a dollar, thanks largely to sustained foreign investments. While a healthy Rupee was a cause of discomfort to major exporters and IT and BPO firms, the situation changed in 2008 when the global monetary crisis led to the exit of significant foreign exchanges from the country.

Due to stagnant reforms, and declining foreign investment, the Rupee started depreciating in early 2013. Before this drop, the government declared measures to stop it from falling any lower, but none were able to stop the depreciation. Then-Indian Prime Minister Manmohan Singh addressed the matter in the Indian Parliament following ongoing depreciation and excessive inflation. According to him, both domestic and international causes are contributing to the current depreciation. Additionally, he pleaded with the political parties to aid his administration in navigating the nation through the crisis brought on by the Rupee's depreciation. 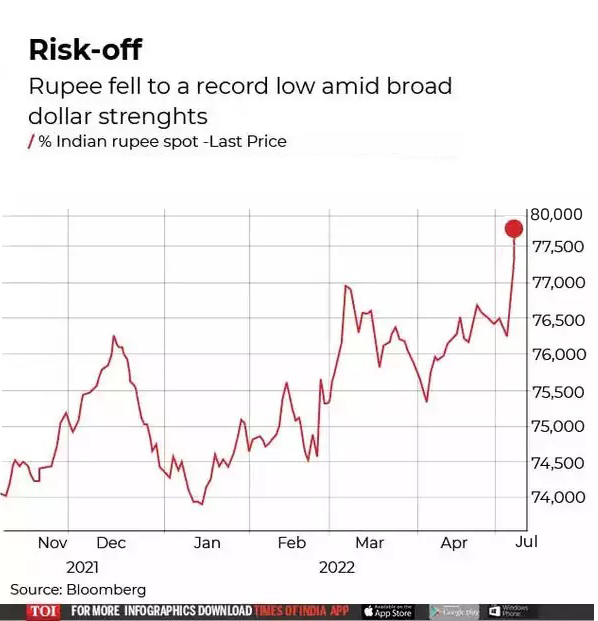 The current crisis is witnessing a record high of foreign equities outflow of around $30 billion so far this year. This evidently has had an influence on the currency, and concerns over a growing current account deficit in the face of rising oil and commodity prices have increased.

As per the Reserve Bank of India, this is not unique to India. The entire global outlook today is clouded by recession fears which have been transferred to the financial market producing surges of volatility, sell-offs of risky assets and flights to safe havens for U.S. dollars. Emerging market economies like India are consequently facing retrenchment of portfolio flows and downward pressure on currencies.

Globally, the sanctions on Russian crude and gas have destabilised an already volatile energy market. Several banks were already offering an exchange rate of 80 rupees for every dollar, notwithstanding the drop in oil prices. By September of this year, strategists at Morgan Stanley and Nomura Holdings Inc. predict that the Rupee may drop to 82 to the dollar, according to Bloomberg.

India is an import-dependent nation-oil, gold, smartphones, and other commodities are sourced from abroad. An imbalance in import exports has led to a trade deficit. U.S. inflation data was expecting a market of 8.8 per cent, but the actual figures turned out to be 9.1 per cent. India’s trade-off is one of several reasons for this downfall. The current trade deficit is 24 billion dollars, an all-time high.

Is this an indicator of economic recession, a time to rethink economic strategy?