US President Donald Trump has said that the nation will stop providing aid to Palestine over the building controversy regarding Jerusalem. Palestine had earlier stated that..

US President Donald Trump has said that the nation will stop providing aid to Palestine over the building controversy regarding Jerusalem.

Palestine had earlier stated that they consider the US as a “dishonest mediator” to the peace process.

Israel is the world's only Jewish state. In 1947, United Nations adopted a plan to partition Palestine into Arab and Jewish sections. In the immediate aftermath, the war between Arab nations and Israel took place. The Arabs were initially on the offensive, but their military resources dried up when the UN declared an arms embargo on the region. Only Czechoslovakia violated the agreement and provided weapons to Israel. In 1949, Israel signed a series of armistice agreements with the Arab nations involved. No peace treaties were signed and in 1967, Israel fought the decisive “Six Day War” against Egypt, Jordan and Syria.

On December 6th, 2017, US President Donald Trump pivoted from decades’ long US foreign policy and recognized Jerusalem as the capital of Israel. The international community has never recognized Israel's claim to the entire city. Trump’s announcement triggered a wave of protests and violence across Middle East. Muslim countries have also unified from the region to condemn the actions of the US President. Turkey’s president has announced that Muslim majority countries will be seeking an “annulment” of the US President’s decision from the United Nations. Countries like France have also expressed their unease over the latest developments. 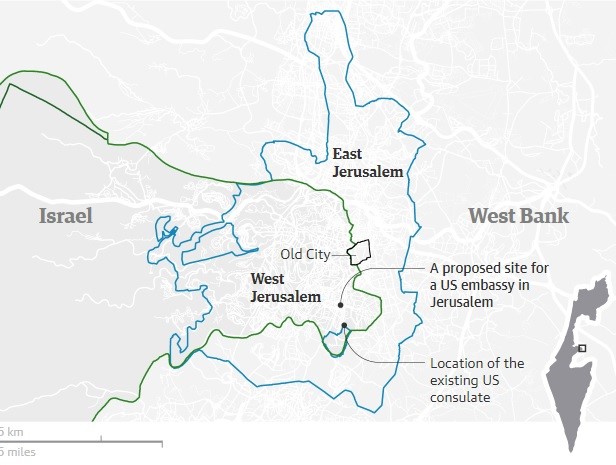 Despite veiled threats from the US, 128 members voted in favor of the resolution condemning and rejecting US President Donald Trump’s decision to recognize Jerusalem as the capital of Israel. Staunch US allies like France and UK voted in a rare rebuke to the United States.

In 2018, Trump has aggressively criticized US’ foreign policies and the aid the nation provides. He particularly singled out Pakistan for allegedly harboring terrorist groups. This resulted in the US suspending the $225 million military aid it had set aside for Pakistan. He took to Twitter again, this time to criticize Palestine and the money the nation receives as aid from the US. He said, “It's not only Pakistan that we pay billions of dollars to for nothing, but also many other countries, and others. As an example, we pay the Palestinians HUNDRED OF MILLIONS OF DOLLARS a year and get no appreciation or respect. They don’t even want to negotiate a long overdue... peace treaty with Israel. We have taken Jerusalem, the toughest part of the negotiation, off the table, but Israel, for that, would have had to pay more. But with the Palestinians no longer willing to talk peace, why should we make any of these massive future payments to them?”

Palestinian President Mahmoud Abbas had earlier noted that he would no longer accept any proposals from the current White House. "The United States has proven to be a dishonest mediator in the peace process," he said.

The United States is its largest governmental donor, handing over almost $370m (£270m) in 2016. The US Ambassador to the UN, Nikki Haley said, “The President has basically said that he doesn't want to give any additional funding, or stop funding, until the Palestinians are agreeing to come back to the negotiation table. The Palestinians now have to show their will that they want to come to the table. As of now, they're not coming to the table but they asked for aid. We're not giving the aid, we're going to make sure that they come to the table.”

Our assessment is that the US President’s Tweets are likely to further alienate nations. If Palestine does not recognize the US as a valid moderator to the peace process, then a clear solution to one of the most embattled regions in the world will continue to evade. Nation states, likely offended by US’ aggressive posture, will also refuse to come to the table.