A gunman opened fire on an open-air music festival in Las Vegas, resulting in 59 deaths and 527 injuries. This was the deadliest mass shooting in modern US history..

A gunman opened fire on an open-air music festival in Las Vegas, resulting in 59 deaths and 527 injuries. This was the deadliest mass shooting in modern US history.

The gunman, identified as 64-year-old Stephen Paddock, opened fire from the 32nd floor of the Mandalay Bay Resort and Casino. Law enforcement continues to probe the motive behind Paddock’s actions.

The right to bear arms is a constitutional freedom in America. It is guaranteed under the Second Amendment (Amendment II) to the United States Constitution. It was adopted in 1791. Gun organizations in the country are among the most politically powerful groups. The National Rifle Association (NRA) has over 5 million members. Since 1998, the National Rifle Association has donated $3,555,194 to current members of Congress.

Multiple efforts to introduce comprehensive gun control laws have fallen short in the past. In February 2017, President Donald Trump signed a resolution blocking an Obama-era rule that would have prevented people with mental disorders from buying guns. Obama had pushed for a stronger federal background check system.

America is home to some of the deadliest mass shootings in history. It has six times as many firearm homicides as Canada, and nearly 16 times as many as Germany. It is home to 4.4% of the global population, however, nearly half of all civilian owned guns are in the US.

Here are five of the deadliest mass shootings in recent history in the US:

Pulse Night Club: Omar Saddiqui Mateen opened fire at a night club in Orlando Florida on June 12th, 2016. It was at the time, the deadliest mass shooting in US’ modern history. It resulted in the deaths of 49 people.

Virginia Tech: Seung-Hui Cho, a student at Virginia Tech University, opened fire in the university and went on a shooting spree. 32 people died due to this attack. Cho later committed suicide by shooting himself.

Sandy Hook: In 2012, Adam Lanza, gunned down children in an elementary school. They were aged between 6 and 7. A total of 27 people died of which 20 of them were children.

Luby's Cafeteria: In 1991, George Hennard killed 23 people in a cafeteria in Texas.

Stephen Paddock, lived in a retirement community, in Nevada about 80 miles northeast to Vegas. According to his brother, he lived a quiet life with his roommate Marilou Danley and loved to gamble. His relatives have noted that he did not reveal any particularly strong political inclinations. He was a former accountant. He was not known to the police. His father had been a criminal bank robber. However, Paddock’s brother has noted that the siblings had never been in touch with their father.

The attack took place on the final day of the three-day music festival called Route 91 country music festival. About 22,000 people were reportedly attending the concert. Paddock opened fire on the crowd from his vantage point at around 10pm in the night. He had reportedly checked in to his room four days before the shooting took place. People immediately began to scramble for cover as the shots continued. Using an automatic weapon, he was able to fire hundreds of shots within a span of few minutes. He was found in his suite dead – he had killed himself with a gun.

The police uncovered 10 suitcases from his hotel room. Law enforcement found 23 guns in his hotel room. They also found over 19 firearms and explosives at his Nevada home. Several pounds of ammonium nitrate were found in his car.

In a strange twist, Islamic State (ISIS) claimed that he had converted to Islam a few months earlier. However, the FBI debunked the statement noting that was no link to international terrorism. US President Donald Trump addressed the nation in the aftermath and described the event as an “act of pure evil.”

Critics have begun advocating for stronger gun laws in the aftermath of the incident. 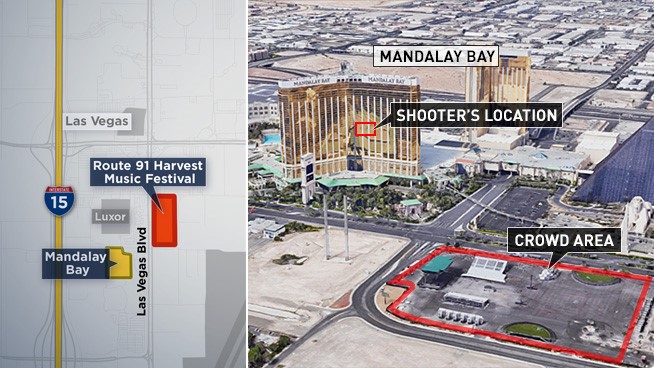 Our assessment is that the security agencies should have been more vigilant in checking the background of Paddock and his immediate family. Given the background of his father, the agencies should have been more vigilant when he was buying more and more sophisticated weapons. We believe that there must be strict restrictions on people owning automatic weapons. It is quite understandable if someone needs a gun for personal protection but such weapons would at best fire five or six shots.