What CPEC means for Pakistan

The China Pakistan Economic Corridor (CPEC) which is part of China’s ambitious One Belt One Corridor’ project has the potential to address Pakistan’s energy..

The China Pakistan Economic Corridor (CPEC) which is part of China’s ambitious One Belt One Corridor’ project has the potential to address Pakistan’s energy crisis and exponentially develop its infrastructure. However, there are obstacles that stand in its way.

China has initiated a Twenty-First Century Maritime Silk Road –‘One Belt One Corridor’ that focuses primarily on connecting and encouraging cooperation among Eurasian countries. The emphasis is on enhancing land as well as maritime routes. The policy is significant for China as it aims to boost domestic growth in the country. It is part of China’s strategy for economic diplomacy as it underlines China’s goal to undertake a larger role in global affairs.

Most of the South Asian countries have signed the deal.  India has however maintained a strong stand of not being party to the joint initiative. It was abstaining from the OBOR forum that was held recently, India’s main concern is that the ‘China Pakistan Economic Corridor’ (CPEC) which is part of OBOR runs through Pakistan occupied Kashmir. However, China has not yet tried to address this issue.

OBOR is a development strategy that focuses on connectivity and cooperation between Eurasian countries, primarily the People's Republic of China (PRC), the land-based Silk Road Economic Belt (SREB) and the oceangoing Maritime Silk Road (MSR). The strategy underlines China's push to take a larger role in global affairs with a China-centered trading network. The future of trade in Asia could depend heavily on what becomes of China’s expansive One Belt, One Road initiative.

In May 2017, Chinese President Xi Jinping pledged at least $113 billion in extra funding for the initiative, and urged countries across the globe to join hands with him in pursuit of globalization. At the time he said, “We have no intention to form a small group detrimental to stability. What we hope to create is a big family of harmonious co-existence.” 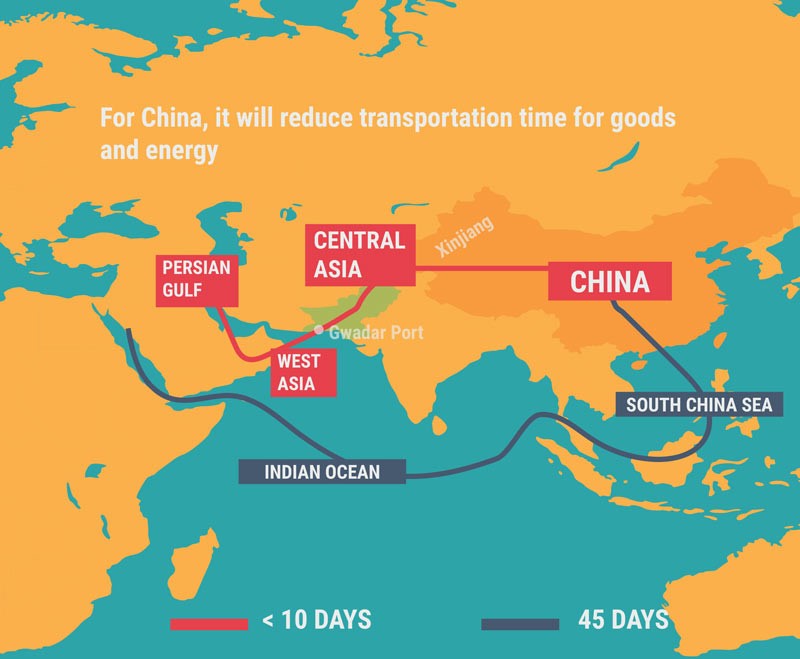 In the more than 60 nations that span Xi Jinping's OBOR vision, none looms larger than Pakistan, possibly the Asian state strategically closest to Beijing after North Korea. China wants to link Kashgar in Xinjiang province to the warm water port of Gwadar in Pakistan's largest and most thinly populated province, Balochistan. In turn, Pakistan will get its biggest infrastructure boost since independence in 1947. Balochistan is one of the four provinces in Pakistan. The region is largely undeveloped and the people who reside there (that also includes Pashtuns and Brahuis) live in relative poverty. In addition, there are a number of militant and separatist groups in the region. It often witnesses terror attacks and violence remains a part of the region’s existence.

Pakistan is often beset with an energy crisis. In 2016 it was reported that the average shortfall in the power sector was 4,000 MegaWatts, and nearly two billion cubic feet per day (BCFD) in the natural gas sector. The OBOR/CPEC project could not only develop Pakistan’s infrastructure but it could also potentially ease the nation’s energy crisis. Michael Kugelman, Deputy Director and Senior Associate for South Asia, has written on this subject to National Bureau of Asian Research publication.  He writes, “Asia ProgramCPEC has great potential to ease Pakistan’s energy supply shortages. It could conceivably zero out the country’s energy shortfall, which ranges from 5,000 to 7,000 megawatts (MW), and produce a more diversified and cheaper energy mix for a nation that currently depends on expensive local furnace oils and oil and gas imports.” However, he has warned that this “will not solve the country’s broader energy crisis, which is rooted in factors that go well beyond supply shortages.”

He has also pointed out the risks inherent within the project. He notes, “However, it is also fraught with risks. These include Pakistan’s questionable ability to repay loans, as well as security threats posed by separatist insurgency, terrorism, and organized crime. For these reasons, CPEC’s future prospects remain uncertain.”

Primarily, one of the biggest obstacles would be India. The nation has repeatedly expressed concerns that this project could negatively affect its sovereignty and put its hold on Kashmir into doubt. Nations like US and Japan have also signaled that they aren’t enthused about the project. China has vowed that it would not change its stance regarding the Kashmir issue but India did not attend the CPEC forum that happened in May 2017.

Our assessment is that if China’s OBOR project and CPEC is successful then many of Pakistan’s endemic problems will be addressed. It is possible that with the help of CPEC, Pakistan could transform itself into one of the top middle income nations in the world in the foreseeable future. However, the risks inherent in the project including the opposition of India and the instability of Balochistan could derail this. It is in China’s strategic interest to have its longstanding strategic partner emerge both as a political and economic counterweight in the region. We believe that such transformational changes could happen in Pakistan notwithstanding all the current challenges it faces.