What about global economy?

Federal Reserve’s Chair, Janet Yellen has warned that there is an “uncomfortably high” risk that the central bank will have to deploy crisis..

Federal Reserve’s Chair, Janet Yellen has warned that there is an “uncomfortably high” risk that the central bank will have to deploy crisis-era stimulus tools again.

It has been a decade since the financial crisis that resulted in global recession.

It has been 10 years since the global economy was severely affected by the financial crisis of 2008. Triggered by the sub-prime mortgage bubble, the stock markets crashed and it was followed by a global recession. Some estimates note that the financial crisis cost $15 trillion globally. In order to address problems related to the subprime mortgage crisis and United States housing bubble, several new tools were created by the Federal Reserve. Some of the tools are: Term Securities Lending Facility, Term Auction Facility and Primary Dealer Credit Facility. The body acted to resuscitate two vital markets that broke down during the panic in the fall of 2008: money market mutual funds and short-term lending to businesses.

A decade after the financial crisis, economies have begun showing signs of recovery. In 2017, International Monetary Fund (IMF) projected a higher than expected growth for China, Japan and the Eurozone countries like Germany, France, Italy and Spain. Due to the strong performances expected from these nations, global growth is expected to be 3.5%. IMF’s chief analyst Obstfeld said, “The recovery in global growth that we projected in April is on a firmer footing; there is now no question mark over the world economy’s gain in momentum.”

However, the prognosis has been less than stellar for US and UK. IMF has downgraded the economic growth rate for both regions. According to new estimates, US economic growth will be 2.1% rather than 2.5%. UK is set to grow by 1.7% instead of 2% that was forecast in April. 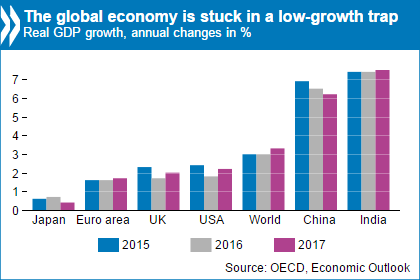 One of the reasons why IMF downgraded the US economic growth is due to the Trump administration’s lack of clarity when it comes to drafting policies. The US government has projected a growth rate of 3% and the nation hopes to give a boost to its economy through expected tax cuts and federal spending.  The IMF has ruled US’ projection unlikely as the labor market is already at a level consistent with full employment. It also critiqued the US administration’s ever evolving policy plans as a source for uncertainty.

In the recent months, a number of experts have begun sounding the alarm regarding the global economy. There are growing concerns over the real estate bubble in China (details can be found here). IMF economist Obstfeld has also stated that despite growth, that recovery may not be sustainable. Jim Yong Kim, the President of World Bank, has warned that unless nations invest in human development, people across the world will lost millions of jobs to automation and remain unemployed. Germany’s outgoing Federal Minister of Finance, Wolfgang Schäuble, has also warned of the possibility of yet another financial crisis. This is due to increased risks arising from the accumulation of more and more liquidity and the growth of public and private debt.

Amidst these concerns, the Federal Reserve’s Chair, Janet Yellen has warned that there is an “uncomfortably high” risk that the central bank will have to deploy crisis-era stimulus tools again. She said that this would be the case even if there is a less severe downturn than the Great Recession. In a recent speech she said that despite the fact the economy had made “great strides”, policymakers may be unable to lift short-term rates very far as the recovery proceeds. She said, “The probability that short-term interest rates may need to be reduced to their effective lower bound at some point is uncomfortably high, even in the absence of a major financial and economic crisis.”

In the recent years, top economists including former Fed governor Kevin Warsh and John Taylor, a Stanford University economist, have criticized the US central bank’s decision to increase its balance sheet to $4.5 trillion during the crisis. US President Donald Trump has also indicated that he might be changing the leadership of the Federal Reserve.

She defended the unconventional tools and warned that it could be used again adding “The bottom line is that we must recognize that our unconventional tools might have to be used again. If we are indeed living in a low-neutral-rate world, a significantly less severe economic downturn than the Great Recession might be sufficient to drive short-term interest rates back to their effective lower bound.”

Our assessment is that the global economy is in the midst of a decade long slow growth environment characterized by an imminent productivity growth crisis. The looming labor shortage in mature economies and skill deficiencies in emerging markets will add further challenges to global economic prospect. Global growth lacks demand drivers and potential output is likely shrinking while uncertainty is increasing.