What about Chinese economy?

A number of credit agencies in the recent months have downgraded China’s credit rating. Experts too have begun sounding the alarm that the nation’s growing debt problem..

A number of credit agencies in the recent months have downgraded China’s credit rating. Experts too have begun sounding the alarm that the nation’s growing debt problem coupled with its complex markets could result in its economy crashing.

If that were to occur, will that affect the world economy?

Due to China’s increasing build-up of credit, Standard & Poor Ratings has downgraded China’s long-term sovereign credit by one step. The nation’s credit has gone from AA- to A+. Kim Eng Tan, an S&P senior director of sovereign ratings explained the company’s decision noting, “Despite the fact that the government has shown greater resolve to implement the deleveraging policy, we continue to see overall credit in the corporate sector to stay at a 9 percent point. We’ve now come to the conclusion that while we do expect some deleveraging in the next few years, this deleveraging is likely to be much more gradual than we thought could have been the case early this year.”

Another ratings agency, Moody’s, downgraded its crediting rating for China in May 2017, also citing concerns about growth and levels of debt. 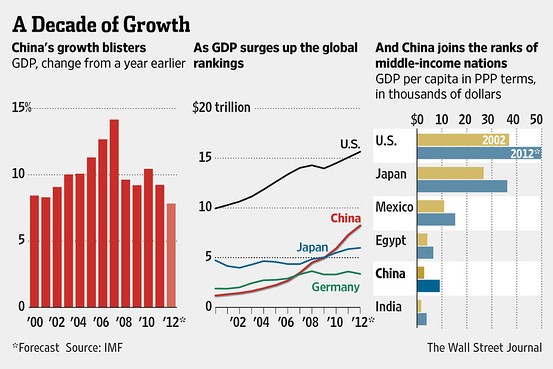 In December 2017, the International Monetary Fund Instability sounded an alarm regarding the growing debt-dependency in China. The organization has stated that economic instability could likely cause a fresh global financial crisis. The agency conducted a health check on the nation’s financial system. It noted that personal debt in the country has increased significantly in past five years. The report also stated that the pressure within the nation to keep pace with the nation’s rapid growth has bred an environment to protect struggling firms.

"In the short-run, growth, as defined by changes in gross domestic product (GDP), can be increased by more lending and investing," write Benn Steil and Benjamin Della Rocca of the Council of Foreign Relations in a new blogpost. The duo warn, “In the longer-term, however, lending and investing can't boost GDP if it results in bad debt that is properly written down. The big question is how much bad debt China currently has, and how much more it will be producing in the years ahead.”

Another reason that should be a concern to is China’s growing mortgage problem. Experts have warned of the rising bubble in China’s real estate markets especially in the larger cities. Some have even compared it to the sub-prime mortgage bubble in the USA that ultimately led to the 2008 financial crisis and the global recession.

Due to its credit being downgraded, Chinese state-backed enterprises may have to face higher financing costs when borrowing abroad. According to SCMP, “A sovereign rating downgrade is a kind of vote of no confidence in China’s economic prospects and Beijing’s capabilities to manage risks… The downgrade by S&P, along with the Moody’s downgrade in May, could undermine the fragile confidence in the Chinese economy and its currency, especially when the Federal Reserve has announced a programme of interest rate rises and the sale of bonds.”

This also could indicate lack of faith on the government’s policies to ensure the economy does not collapse on itself. China’s economy is expected to slow down this year as a government-led crackdown on debt risks and factory pollution is expected to drag on overall activity.

Our assessment is that the growing debt in China poses a threat not only to the economic health of the nation but also to some extent, the world. The growth in personal debt is a worrying trend and consumer loans have significantly grown in the recent years. This correlates with the 2007-2008 financial crisis that was sparked by the sub-prime mortgage problem in the US. It is time for the nation and the government to stop emphasizing on growth targets and focus on implementing actionable measures that can rein in the economy. If the second largest economy in the world were to collapse, that would have immediate ramifications not only in Asia but also globally.