The sole Blockstack developer in Hong Kong, Larry Salibra, is hoping that decentralized platform will help users circumvent censorship in China’s mainland. Is Blockstack the..

Is Blockstack the future of the internet?

The Internet is the global system of interconnected computer networks that use the Internet protocol suite (TCP/IP) to link devices worldwide. The origin of the internet can be traced back to the 1960s when the United States Federal Government commissioned research. By the 1990s, the modern iteration of the internet began to take shape. By the late 2000s, nearly every facet of the modern human life was integrated by the internet.

There is data centralization in the traditional mode of the internet. This centralization of information by tech giants such Facebook and Google has been criticized as a threat to user privacy and cybersecurity. Experts also believe that the centralization of the data also leaves private data vulnerable to hacking.

Blockstack is a new internet for decentralized apps where users own their data. In this form of service, users keep their data locally when they run apps. It builds an alternate DNS and alternate public-key infrastructure. It's the first implementation of a decentralized DNS system on top of the Bitcoin blockchain. As of March 2016, Blockstack was the largest non-financial system using the Bitcoin blockchain by transaction volume. Blockstack was founded in 2013 by Muneeb Ali and Ryan Shea. In 2017, it was announced that the New York-based Blockstack was launching a $25 million venture capital fund. At the time, Ali said, “What we are doing is opening up this channel between app developers on Blockstack and venture capital, so that [developers] can actually go and talk to these investors, get feedback from them and then potentially get some money to build out their apps.” The project has entered a phase where people can slowly start using it. 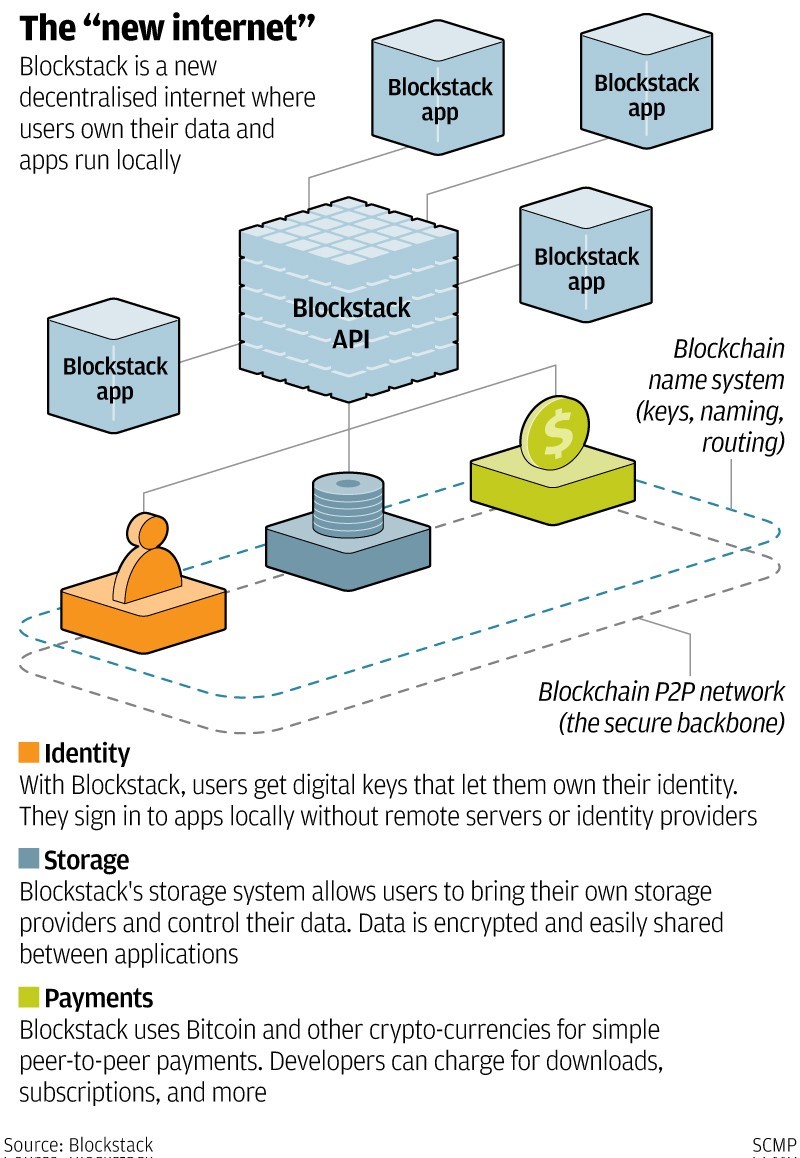 Internet censorship in China is widespread and imposed by the government. The nation has in place more than sixty rules and regulations that monitor flow of information through the internet. Political censorship in the communist regime is built into layers of China’s online infrastructure.

The Ministry of Information Industry (MII) oversees internet censorship. According to Human Rights Watch, the first layer of online censorship in China happens through routers. The government has long used online tools to suppress dissident opinions. As of 2013, the state media noted that more than two million people in China are employed by the government to monitor web activity.

In a bid to circumvent China’s “firewall” and also to wrest power from tech giants like Alibaba and Facebook, Larry Salibra, a cybersecurity expert, has become the sole developer of Blockstack in Hong Kong. He said, “It’s a really big change from the current internet ... we [take] the value away from these big centralized companies like Facebook and Google and put data back into the users’ control. By using bitcoin transactions and putting some special data into each transaction, we’re able to create a virtual blockchain on top of the bitcoin blockchain that just has Blockstack-specific data.”

Every time a Blockstack app is opened, the data can only be accessed by the user and the app and not by any third party. One of the reasons why Salibra is working in China is to overcome the hurdles posed by government censorship. He admitted, “[Bypassing the Great Firewall] was one of my motivations. We envision a world where ... if what they’re doing is illegal, you get a court order and you enforce that against them in the real world. You don’t want Google making its own decision about what’s acceptable or governments going to them to delete domains.”

Our assessment is that it is quite possible that millions across the world would navigate to Blockstack in the future in order to ensure their own privacy and the security of their data. However, this will pose a threat to tech giants and governments that benefit from the centralization of data. We believe Blockstack has the potential to become Web 3.0.