Washington is driving China and Russia closer than before

The policy deployed by the Trump Administration is re-forging the Sino-Russian relations in a new fire. China and Russia have had a somewhat tumultuous past. From former allies to bitter rivals throughout the 60s and 70s despite both being led by communist governments and finally...

The policy deployed by the Trump Administration is re-forging the Sino-Russian relations in a new fire.

China and Russia have had a somewhat tumultuous past. From former allies to bitter rivals throughout the 60s and 70s despite both being led by communist governments and finally back to allies again in the 90s. Both nations, despite not having a great deal in common culturally, find themselves politically in agreement on a large number of key issues on the global stage, often offering a viewpoint that is opposed to those offered by their American or European contemporaries.

China and Russia are already coordinating on many aspects of foreign policy, such as supporting the Assad regime in Syria, criticizing the handling of the Korean Peninsula crisis by the United States and, most recently, the U.S. decision to recognize Jerusalem as the capital of Israel. As both are permanent members of the United Nations Security Council, combined - they have a great deal of power when it comes to organizing or preventing any action by the international community. 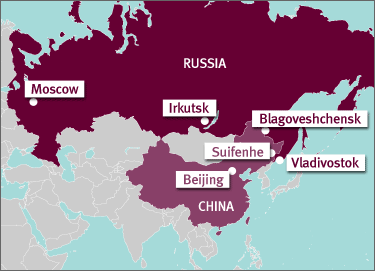 Xi is travelling to Vladivostok, in the Russian Far East, on Tuesday and Wednesday for an economic conference where he’s expected to meet with Putin, while China joins vast Russian war games for the first time.

Neither side has said what they’ll discuss, but Trump’s policies on trade and North Korea are topics of interest to both Russia and China. And U.S. sanctions on Russia have played a role in driving Russia and China closer together. The setting is also symbolic — Vladivostok and the Russian Far East are developing close ties with China, including a vast new casino complex aimed at attracting Chinese high-rollers.

On the military front, China is sending 3,200 troops to take part in Russia’s vast Vostok (East) military exercises this month. They’re scheduled every four years and some previous versions have modelled scenarios similar to a Russia-China conflict.

Russia’s involvement in the war in Syria could also offer some lessons for China’s military, which last fought a war against Vietnam in 1979. Additionally, Russia and China have a growing trade relationship. Crude Oil, gas, foodstuffs and consumer goods make up the bulk of the bilateral trade.

However, some big deals announced at previous summits have died out or never been realized, and a $9 billion deal for Chinese company CEFC to take a stake in Russian state-controlled oil company Rosneft collapsed in March. The Chinese media reported that the head of CEFC had been detained by government investigators.

U.S. policy has also driven Russia and China closer together commercially. For Russian companies, China offers investment with much less risk of being affected by U.S. and European Union sanctions, though it can be “painful and uncomfortable” for big Russian firms to negotiate with China as a junior partner. Chinese companies see Russia as a supplier which won’t come under any new U.S. tariffs.

Both Russia and China have a direct interest in the future of North Korea since they both share a border with the secretive nuclear-armed nation, although the Russia-North Korea border is much smaller at just 17 kilometres (11 miles) long.

Sanctions enforcement is a complex issue for both countries since both have employed cheap North Korean labour in the past. In Russia, that even included construction workers toiling on the World Cup soccer stadium in St. Petersburg, where one worker was reported to have died.

However, despite their growing cooperation and friendship, many unresolved issues remain. The two countries are competing for political influence over the ex-Soviet states of Central Asia. Turkmenistan, for example, used to sell almost all its natural gas to Russia but it now sells mostly to China.

Chinese migrants in Russia, estimated to number in the hundreds of thousands, are also often on the margins of society and have occasionally been targeted by Russian migration officials who fear an “invasion” of the sparsely populated Far East region.