Newly appointed Malaysian Prime Minister Mahathir Mohammed calls for a reduction of warships in the disputed South China Sea. The South China Sea is at the heart.. 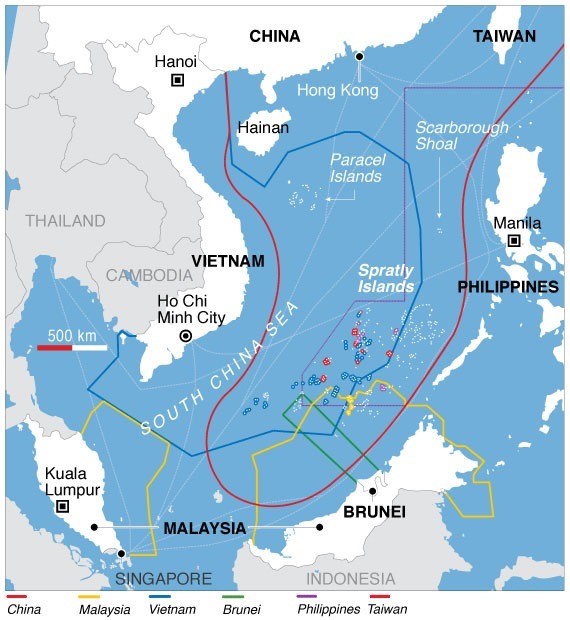 China’s claim to the region is historic going back to the Xia and Han dynasties. In the past, China has backed its expansive claims with island-building and naval patrols. The vast majority of international legal experts have concluded that China's claims based on historical claims are invalid. Many ambiguities also arise from the notion of historical claims as a basis for claiming sovereignty.

Malaysia claims a small number of islands in the Spratly Islands and its claims cover only the islands included in its Exclusive Economic Zone (EEZ) of 200 miles as defined by the United Nations Convention on the Law of the Sea (UNCLOS). Malaysia has militarily occupied three islands that it considers to be within its continental shelf.

Malaysia’s traditional approach to the South China Sea dispute under the former Prime Minister Najib Razak can be summed up as “playing it safe” so as to not affect their close ties to China. There has been strong rhetoric by Malaysian politicians to strengthen Malaysia’s claims by deploying more patrolling units. However, the newly elected Prime Minister Muhathir Mohammad has taken a softer stance.

“I think there should not be too many warships. Warships create tension,” the 92-year-old leader told the South China Morning Post in an exclusive interview. “Someday, somebody might make some mistakes and there will be a fight, some ships will be lost, and there might be a war. We don’t want that.”

China’s latest military exercise was held last month when it dispatched two navy warships to the contested waters. US had deployed the Higgins guided-missile destroyer and the Antietam, a guided-missile cruiser, within 22 nautical miles of the Paracel Islands last month on the basis of “freedom of navigation.” Presence of warships and military units within the disputed territories has only heightened tensions in the past.

PM Mahathir has not commented on whether Malaysia’s policy will change. Instead, Mahathir said he just wanted Malaysia to continue occupying the disputed islands that it currently holds. According to the U.S. Energy Information Administration, the Southeast Asian country has reserves of 5 billion barrels of crude oil and liquids reserves, and 80 trillion cubic feet of natural gas beneath the seabed, the highest proven and probable estimate of any South China Sea claimant nation.

Mahathir said that one way to keep the peace in the South China Sea was for the waters to be “patrolled by small boats” that would be “equipped to deal with pirates, not to fight another war”. He also added that the patrols can be carried out by ASEAN (Association of South East Asian Nations) owing to proximity and their own historic membership in the community.

“His views do not represent a change in Malaysia’s policy, but I think we can expect Mahathir to be more critical of China’s assertive behaviour in the South China Sea than his predecessor, who was in hock to Beijing,” said Ian Storey, of Singapore’s ISEAS-Yusof Ishak Institute.

The move will not be easily accepted by China on grounds of defence necessity. On the other hand, US will maintain their stance on the disputed area being “international waters” that are open to their “freedom of navigation.”

Our assessment is that the experienced statesman can influence his counterparts within ASEAN to take an assertive stance against Chinese aggression in the region. Moreover, the trade-dependent country’s close alliance with China may open up channels for communication, negotiation and compromise. We believe that by restricting passage of warships, hostilities may give way to relatively more acceptable remedies for the situation.