Three U.S. Navy aircraft carriers have begun joint naval exercises with South Korean in the waters off the Korean Peninsula. This is the first time in over a decade when..

Three U.S. Navy aircraft carriers have begun joint naval exercises with South Korean in the waters off the Korean Peninsula. This is the first time in over a decade when these three Navy carriers sailed together.

North Korea has deemed this as “catastrophic” war games that could result in a war.

Trump has taken an aggressive stance while countering North Korea. Recently he said that the country “will be met with fire and the fury like the world has never seen.” North Korea responded by announcing that plans were underway for it to strike Guam, a US territory. 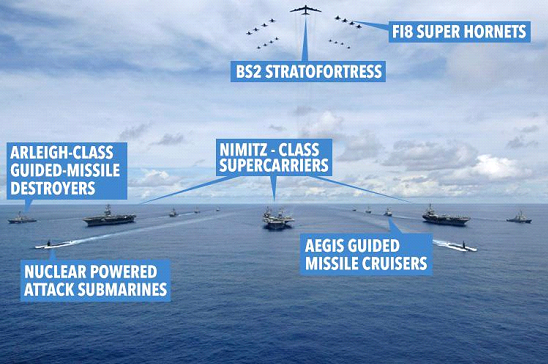 The USS Ronald Reagan, USS Nimitz and USS Theodore Roosevelt strike groups operated together, marking the first time three American aircraft carriers have trained together since 2007. The carriers will conduct several training activities, including air defense drills, sea surveillance and defense air combat, until Tuesday. "Multiple carrier strike force operations are very complex, and this exercise in the Western Pacific is a strong testament to the US Pacific Fleet's unique ability and ironclad commitment to the continued security and stability of the region," Adm. Scott Swift, the commander of the US Pacific Fleet, said in a statement.

The drill involves 21 vessels – including 14 from the US and seven from South Korea, with the latter equipped with the Aegis Combat System which allows them to track and guide weapons to destroy enemy targets. The Aegis technology refers to missile tracking and guidance. “The exercise is aimed at enhancing deterrence against North Korea’s nuclear and missile threats and showing off preparedness to fend off any provocative acts by the North,” a South Korean defence ministry spokesman said.

US President Donald Trump has recently visited South Korea to discuss strategies on how best to counter the threat posed by North Korea. He said, “We sent three of the largest aircraft carriers in the world (to the Korean Peninsula) and a nuclear submarine is also positioned.” Later he would mock North Korean leader Kim Jong Un tweeting, “Why would Kim Jong-un insult me by calling me 'old,' when I would NEVER call him 'short and fat?' Oh well, I try so hard to be his friend - and maybe someday that will happen!”

North Korea has reacted harshly to the exercises and has stated that these exercises could result in war, A statement by the country’s state media quoted the foreign ministry noting, "Trump, during his visit, laid bare his true nature as destroyer of world peace and stability and begged for a nuclear war on the Korean peninsula.” The agency also stated, “The joint marine drill around the Paekryong and Yonphyong Islands aimed at a preemptive strike at major targets of North Korea was a deliberate and planned military provocation to further strain the situation of acute confrontation. The situation of the Korean peninsula is now on the worst phase of tension in which a nuclear war may break out any moment due to the US reckless moves for aggression on the DPRK. So, it is clear what a catastrophic phase such war games will bring.”

Our assessment is that the diplomatic conflict between North Korea and the US has continued to escalate in the recent months. Even a small accident at this juncture could result in an all-out armed conflict and the consequences of that would be devastating for the Korean Peninsula.