Walmart has announced that it will acquire a 77% stake in the Indian ecommerce website Flipkart. Flipkart is the most popular ecommerce brand in India, owning the largest market share by a small margin.

Flipkart’s other investors include Tencent, Tiger Global, SoftBank, and Microsoft.

Walmart Inc. is an American multinational retail corporation that operates a chain of hypermarkets, departmental stores, and grocery stores. Headquartered in Bentonville, Arkansas, the company was founded by Sam Walton in 1962 and incorporated on October 31, 1969. It also owns and operates Sam's Club retail warehouses. As of January 31, 2018, Walmart has 11,718 stores and clubs in 28 countries, operating under 59 different names.

Walmart has been trying to enter the Indian market for over 15 years. In 2007, Walmart was briefly involved in a wholesale joint venture with Indian conglomerate Bharti. The venture, meant to build and operate superstores in India, dissolved less than a decade later. Walmart CEO Doug McMillion is on a mission to acquire more customers as its U.S. consumer base has been dwindling. The brand closed dozens of Sam's Club locations at the beginning of the year and has shuttered more than 150 stores across the US since 2016.

Flipkart was founded in 2007 by Sachin Bansal and Binny Bansal, both alumni of the Indian Institute of Technology, Delhi. They worked for Amazon.com and left to create a new company incorporated in October 2007 as Flipkart Online Services Pvt. Ltd. Flipkart started by selling books online and popularised the idea of online book sales in India.

In October and November 2011, Flipkart acquired the website Mime360.com and rights to digital catalogue of Chakpak.com. By August 2015, Flipkart had raised a total of $3 billion, over 12 rounds and 16 investors. Flipkart announced on April 10, 2017, that it had secured a fresh $1.4 billion at a valuation of $11.6 billion from the likes of eBay, Microsoft, and Tencent. On August 10, 2017, Softbank Vision Fund invested $2.5 billion in Flipkart. 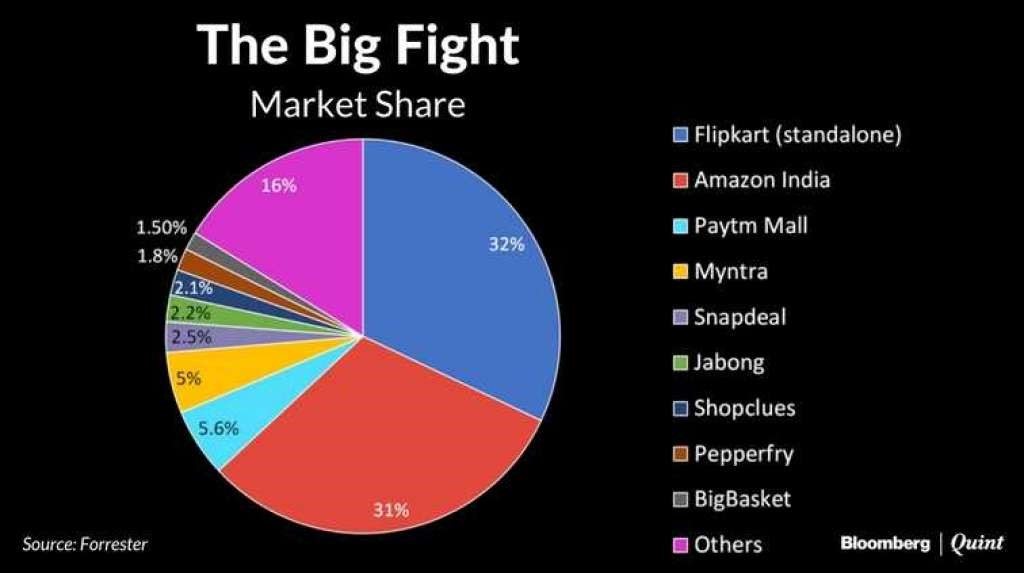 On 9th May, Walmart announced that it would be buying a 77% majority stake in the Indian ecommerce company Flipkart. The deal is worth approximately $16 billion. Walmart may be buying a large portion of this share from Japanese SoftBank, which is currently one of Flipkart’s largest stakeholders. “India is one of the most attractive retail markets in the world, given its size and growth rate, and our investment is an opportunity to partner with the company that is leading the transformation of ecommerce in the market,” Walmart president and CEO Doug McMillon said in a statement.

Analysts have noted that this deal could help Flipkart in its battle against the Indian arm of American ecommerce giant Amazon. “This deal comes as a setback for Jeff Bezos as he stands to lose roughly 32% of the subcontinent's online shopping market share,” research firm Forrester noted. Amazon had reportedly made its own offer to buy Flipkart, as talks with Walmart reached an advanced stage.

Walmart brings to the deal experience in areas such as groceries, noted Satish Meena, analyst at Forrester. "For Flipkart, this deal is more than just money... With Amazon closing the gap in categories other than fashion, Flipkart needs Walmart to remain competitive in the long term," Meena said. “This deal means India is building an ecosystem like in China. A combination of online and offline is the new way forward,” said Kishore Biyani, CEO of Future Group, which owns the Nilgiris and Big Bazaar retail chains.

Critics have noted the dangers of predatory pricing and the potential of these ecommerce players to drive local companies out of business. “Some ecommerce companies in India have not been adhering to the guidelines issued under the Press Note 3 of the FDI Policy for marketplaces,” said Kumar Rajagopalan, CEO of the Retailers Association of India. “These companies have been directly or indirectly participating in [under]pricing and discounting, which is against the policy that seeks to create a level playing field. We hope the government takes strong steps to ensure adherence to FDI policy,” Rajagopalan added.

Our assessment is that this deal will allow Walmart to compete for a stake in India’s growing retail sector. With a burgeoning middle class and increasing access to mobile phones and data, India is a lucrative market. Amazon has invested $5 billion into its Indian market, and Alibaba-backed PayTM Mall and Walmart clearly see promise in India’s ecommerce sector. However, as the industry continues to grow, the state must consider regulations or policies to prevent predatory pricing and protect local traders such as street vendors and kirana stores.