Wall Street on a high

Buoyed by stronger than expected economic growth for the US, equities markets in Wall Street ended on a high, with the Nasdaq rising to a new record. Analysts have noted..

Buoyed by stronger than expected economic growth for the US, equities markets in Wall Street ended on a high, with the Nasdaq rising to a new record.

Analysts have noted that they expect the bull market to continue to rise in the fourth quarter as well.

The Nasdaq Stock Market is the second-largest exchange in the world by market capitalization. It is one of the stock markets in America. Only the New York Stock Exchange is bigger than Nasdaq. Both stock exchanges are located in New York city. The exchange platform is owned by Nasdaq, Inc. It was founded on February 4, 1971. As of July 2015, it had 3,058 listings. Its market capitalization is currently $7 trillion. It was the world's first electronic stock market.

The Dow Jones Industrial Average is a stock market index founded in 1885. The first industrial average was calculated on May 26, 1896. The index is owned by S&P Dow Jones Indices (owned by S&P Global). It is an index that shows how 30 large publicly owned companies based in the United States have traded during a standard trading session in the stock market.  Like every other market index, it goes through a period when it is on the rise and it goes through a period when it is on the decline. A period when there is an increase is referred to as the bull market and when there is decline, it is called a bear market. Since 2009, Dow has been experiencing a bull market. The market began rising even further since the US presidential elections. On January 25, 2017, the Dow closed above 20,000 for the first time ever. In August 2017, for the first time in its 121-year history, it broke the 22,000 barrier. 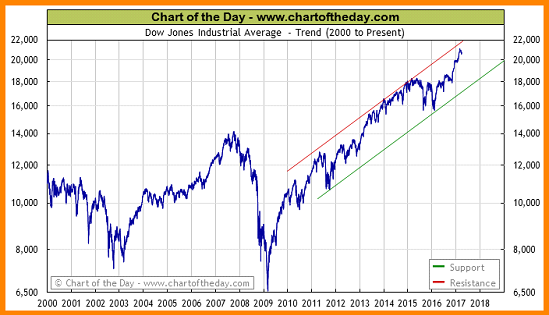 The US economy expanded at an annual pace of 3% during the three months to the end of September. The growth rate is higher than what had been forecast by experts. This was despite the fact there were multiple hurricanes that caused wreaked destruction in states like Florida and Texas. In the previous quarter the US GDP grew at an annual pace of 3.1%. On a year-on-year basis, GDP was up 2.3% according to estimates. The economy has grown for eight straight years, one of the longest stretches in history. Unemployment rate has also come down.

Buoyed by stronger than expected economic growth, equities markets in Wall Street ended on a high, with the Nasdaq rising to a new record. The Dow Jones Jones Industrial Average finished up 0.1% at 23,377.2 points and the S&P 500 rose by 0.1% to 2,575.2. Nasdaq Composite rose by 0.4% to 6,727.6 points, a record high. Analysts have stated this is largely due to US consumer confidence hiting a 17-year high in October 2017.

Technology companies have also played a crucial role in sustaining the bull market as stocks for companies like Apple, Amazon and Google have consistently risen in 2017. Apple stocks specifically rose by 1.4% to a record high amid good reviews for its new iPhone product (iPhone X). S&P also noted that more than half of the index's gains were driven by just five stocks — the tech giants Facebook, Amazon, Apple, Google and Microsoft.

“You look at the earnings out of these big players and they continue to impress,” said Steve Chiavarone, portfolio manager with Federated Investors in New York. “It strikes me that that leads you to a much more bullish outlook for the fourth quarter.” He also noted that investors are choosing the ignore the political chaos surrounding the current White House administration amid the Russia investigation (details of which can be found here). He said, “I think fundamentally investors are really focused on those numbers more than the political noise, if you will, in the background.”

“The macro data is getting better, the market is prepared for Jerome Powell, the market is also prepared for Friday’s payrolls. I also think the market is ready for what the (Fed) says tomorrow,” said Ken Polcari, director of the NYSE floor division at O’Neil Securities in New York. “I don’t think there is anything out there that could derail the market from a point of view it doesn’t already expect.”

“We continue to see better-than-expected economic numbers and corporate earnings,” said Peter Jankovskis, co-chief investment officer at OakBrook Investments in Lisle, Illinois. “I think fundamentally investors are really focused on those numbers more than the political noise, if you will, in the background.”

Due to the robust performance of the stock markets, bonuses in Wall Street are also expected to rise. According to reports compensation is on track to rise 3.8 percent this year, suggesting that the average bonus of $138,210 could rise to $143,462.

Our assessment is that Wall Street and businesses are reacting to expected tax cuts promised by the Trump administration; especially the reduction to the corporate tax. In addition, investors are also waiting for the announcement of the next Federal Reserve Chair. Most expect Trump to appoint Fed Governor Jerome Powell who is viewed as a stock market friendly pick.