The state of Venezuela is currently on the brink of economic collapse. With soaring levels of inflation, scarce resources, and political uncertainty, the country has seen a surge in..

The state of Venezuela is currently on the brink of economic collapse. With soaring levels of inflation, scarce resources, and political uncertainty, the country has seen a surge in refugees crossing the borders of neighbouring countries.

In the past week, Columbian and Brazilian officials have responded to this crises by tightening borders and formulating plans for support.

The Bolivarian Republic of Venezuela is located in northwest South America. In 2017, the UN estimated that the country is home to over 31 million people. The country stretches across over 900,000 square kilometres. It is bordered by the Caribbean Sea in the north, and Columbia, Guyana, and Brazil in the west, east, and south respectively. Venezuela was colonised by Spain in 1522 and became the first Spanish territory to declare independence from the empire in 1811.

Despite having the world’s largest oil deposits, many Venezuelans live in abject poverty. The former President Hugo Chavez, was in office from 1999 to 2013. In that period, billions of dollars were spent on generous social programs. However, since his successor Nicolas Maduro took office, there has been a rise in inflation and a shortage of basic goods. A drop in oil prices has added to the administration’s problems.

Since 2014, there have been recurrent protests against the government. Detractors blame the current administration’s economic policies for the crisis. The country also experiences a high level of urban violence. Since 2017, these protests have increased amongst calls for fresh elections to remove the United Socialist Party (PSUV) from power. This month, the National Electoral Council brought the date for the general elections forward to April 22nd. Top opposition leaders are banned from running, leading to fears that the country is spiralling towards dictatorship under Maduro.

The nation’s economy has become increasingly unstable. The IMF has estimated that the Venezuelan economy will see a reduction of 15% this year, while inflation will reach 13,000%. As of 2017, the country had only $10 billion in reserves. In November 2017, Maduro announced plans to restructure the nation’s massive foreign debt. The restructuring effort will be led by Vice President Tareck El Aissami, who will also start "the fight against the financial persecution of our country," according to Maduro.

Meanwhile, recent studies have revealed that at least 93% of the population can’t afford to buy enough food. The country faces shortages of basic goods and food supplies. Due to the current regime’s lack of regard for democratic process, the country has multiple sanctions imposed on it by the EU and the United States. 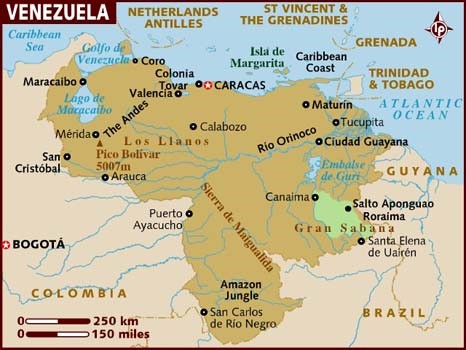 As Venezuela spirals into crisis, thousands of the country’s citizens are fleeing conditions of rapidly declining economic, health, and safety conditions, by crossing borders into neighbouring countries Brazil and Columbia. The two nations have consequently begun tightening their borders, sending troops to sensitive areas.

Columbia, in particular, is aiming at making it harder for refugees to cross the border. The country saw an influx of over 500,000 people during the latter half of 2017. According to Mauricio Cardenas, Columbian Finance Minister, 2,000 Venezuelans now cross the border every day.

In an interview with Reuters on Friday, Cardenas said that the Columbian government is looking to establish a plan to provide fiscal support to the country, when Maduro’s reign eventually collapses. According to their estimates, the country will need a loan of approximately $60 billion to begin to recover. “We think the days of Maduro are numbered. The implosion of Venezuela’s economy is accelerating,” he said.

Brazilian defence minister Raul Jungmann expressed a similar sentiment. “This is a humanitarian drama. The Venezuelans are being expelled from their country by hunger and the lack of jobs and medicine,” he said during a visit to the border town of Boa Vista. “We are here to bring help and to strengthen the border.” “We have a very serious problem that will only get worse,” Mayor Teresa Surita, said. “The city’s streets are increasingly filled with poor migrants.”

According to United Nations High Commission on Refugees (UNHCR) operation chief George Okoth-Obbo, Brazilian officials have been working with UNHCR to reduce the pressure on these border towns.

Our assessment is that the state of affairs in Venezuela demonstrate how failing economies and political systems lead to vulnerable borders. It is hyperinflation, food shortages, and political crises that have led to the mass migration of Venezuelan refugees into neighbouring countries. In situations like this, we believe that it is essential for other countries in the region to prepare appropriate systems to process and aid migrants. We believe that this will trigger a refugee crisis in the South America.