International credit ratings agency Standard & Poor's has since declared Venezuela to be in "selective default". 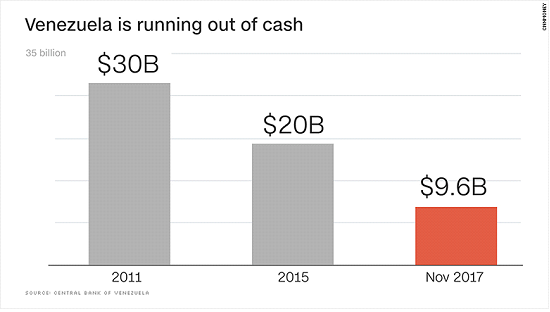 Amid all the political turmoil, Venezuela's cushion of cash has fallen to its lowest point in over 20 years. Venezuela only has $10 billion in reserves. A nation’s reserves is the amount of funds it has to address any crisis and to ensure economic stability. Additionally, the nation has incurred $140 billion in external debt. This includes loans from countries like Russia and China.

International credit ratings agency Standard & Poor's has since declared Venezuela to be in "selective default". The country has failed to make $200m (£153m) in repayments on its foreign debt. This could have been the first of many defaults on more than $60 billion in international bonds. President Maduro has revealed that he is currently trying to restructure Venezuela’s foreign debt. The nation is also dealing with harsh financial sanctions that was issued by the US in August 2017.

The latest developments could have a negative effect on the global oil market. If the global oil market were to lose Venezuela’s 2 million BPDs, then would cause a huge aftershock. Dan Yergin, vice chairman of IHS Markit said, “It would certainly be a very tight market, because of course you already have production restraints by OPEC and non-OPEC. Venezuela is an important (oil) producer. It has lost a lot of the talent, a lot of its capabilities, what its production really is, and it seems on verge of turmoil.”

The International Monetary Fund predicts that inflation in Venezuela will hit 650% this year and 2,300% in 2018.

Our assessment is that Venezuela’s is in the midst of deep financial and humanitarian crisis. If enough holders of a particular bond demand full and immediate repayment, it can prompt investors across all Venezuelan bonds to demand the same thing. As Venezuela doesn't have the money to pay all its bondholders right now, investors would then be entitled to seize the country's assets -- primarily barrels of oil -- outside its borders. If the economy continues to collapse, then the nation may not be able to feed its population.