In order to protect the European companies conducting business in Iran, the European Union has begun reviving legislation that will allow these companies to ignore US sanctions and..

In order to protect the European companies conducting business in Iran, the European Union has begun reviving legislation that will allow these companies to ignore US sanctions and continue their work.

This development comes just weeks after US President Donald Trump withdrew the US from the Iran nuclear agreement and re-imposed sanctions on the region.

In the 2000s, reports began emerging of Iran running a secret uranium enrichment program. An investigation by the IAEA revealed that Iran had not declared a number of its nuclear activities to the group. Thus, the nation was subjected to multiple harsh sanctions from the international community. This has cost the nation billions of dollars (an estimated $100 billion in oil revenues alone till 2015). It has also lost out on foreign direct investment.

On April 2, 2015, the P5+1 and Iran reached a provisional agreement that sought to lift most of the sanctions in exchange for limits placed on Iran's nuclear programs, extending for at least ten years. When the International Atomic Energy Agency (IAEA) certified that Iran had restricted its sensitive nuclear activities, UN sanctions were lifted on January 16, 2016.

US President Trump refused to certify Iran’s compliance with the deal in October of last year. He directed his administration to “address the deal’s many flaws so that the Iranian regime can never threaten the world with nuclear weapons.” The European Union has staunchly defended the deal in the past. French President Macron and German Chancellor Angela Merkel even visited Washington to persuade Trump against withdrawing from the deal.

Despite strong pleas from the international community, on March 8, 2018, President Trump withdrew the US from the deal. The controversial move was condemned by several US allies including the United Kingdom. Meanwhile, Iran’s Foreign Minister has reached out to China and Russia to ensure that the deal remains in place with regards to the other signatories. 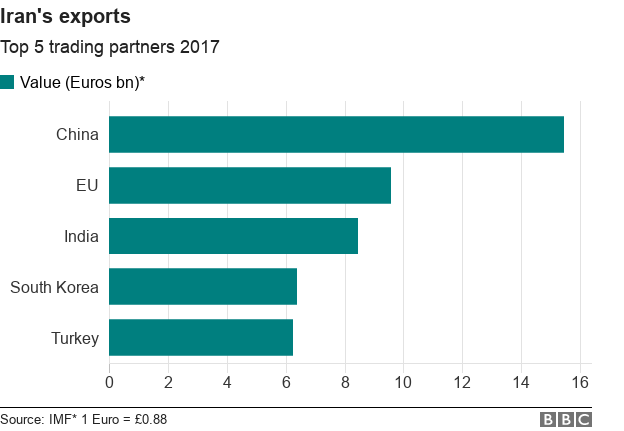 After withdrawing from the agreement, Washington has once again imposed harsh sanctions on Iran. These sanctions will not only affect Iran’s economy but also threaten multiple companies based in Europe. In 2017, EU exports to Iran were worth $12.9 billion. European companies with interests in Iran include Airbus and ATR, who have signed deals to sell planes to Iran Air. Germany’s Siemens and Italy’s FS rail have entered partnerships for rail projects, France’s Renault has entered joint ventures in the country, and Volkswagen has resumed exports to Iran. BP is part of a joint venture to develop the Rhum gas field, and French company Total has signed a $5bn deal to develop the South Pars gas field.

In order to protect companies working in Iran presently, the European Union has begun reviving legislation that will allow these companies to continue doing business despite US sanctions. The European Commission has signalled that it will begin the process of activating a law that bans European companies and courts from complying with US sanctions.

Jean Claude Juncker, president of the European Commission has argued that the European Union has the duty to protect companies in the region. “We will begin the ‘blocking statute’ process, which aims to neutralise the extraterritorial effects of US sanctions in the EU. We must do it and we will do it tomorrow [Friday] morning at 10.30,” he said at the end of a summit in the Bulgarian capital, Sofia. He added, “The effects of the US sanctions will be felt. It is the duty of the EU therefore to protect European business and that applies particularly to smaller and medium-size businesses.”

The European council president, Donald Tusk has also been critical of President Trump. He noted that Trump was guilty of “capricious assertiveness”. He said, “The problem is if your closest friend is unpredictable. It is not a joke now. This is the essence of our problem now with our friends on the other side of the Atlantic. I can agree with President Trump when he said unpredictability can be a very useful tool in politics. But only against enemies and opponents. Unpredictability is the last thing we need with friends and family.”

What is the statute?

The statute that the European Union wishes to revive is a 1996 regulation. It specifically bans companies from the EU region as well as courts from complying with foreign sanctions. It also notes that judgments from foreign courts will also have no effect in the EU. This will, thus, provide a clear path to EU-based companies to continue working in Iran.

Our assessment is that the latest developments have put the US on a direct collision course with the European Union and much of the international community. China and Russia have also signalled that their governments are committed to protecting the nuclear agreement at any cost. Now, some of US’s closest allies such as UK and France have begun actively advocating for companies to ignore US sanctions. This indicates the waning power of Washington, and should be a source of concern to US lawmakers.