US to tax European steel?

US steel and aluminium tariffs on Europe are scheduled to take effect on Friday (June 1st). Recent talks have indicated that EU, a key ally, may not receive an exemption..

etaliation if the tariffs come into effect.

Since taking office, Trump has withdrawn from the Trans-Pacific Partnership, and initiated the renegotiation of the North Atlantic Free Trade Agreement. In recent months, experts have begun sounding the alarm about an impending trade war between US and China, the two largest economies in the world. These fears solidified in March, when Trump announced global import tariffs of 25% on steel and 10% on aluminium. The President cited “national security” in order to circumvent WTO commitments. Since then, tensions have escalated. The US has imposed tariffs worth over $150 billion; Beijing responded with $50 billion worth of tariffs.

The US is highly reliant on steel imports. American steel production has fallen from 112m tons to 86.5m tons since 2000. Employment provided by the industry has fallen from 135,000 jobs to 83,600 jobs. Canada is the United States’ biggest steel exporter at 16%, followed by Brazil, South Korea, and Mexico. Japan is 7th and India is 10th. 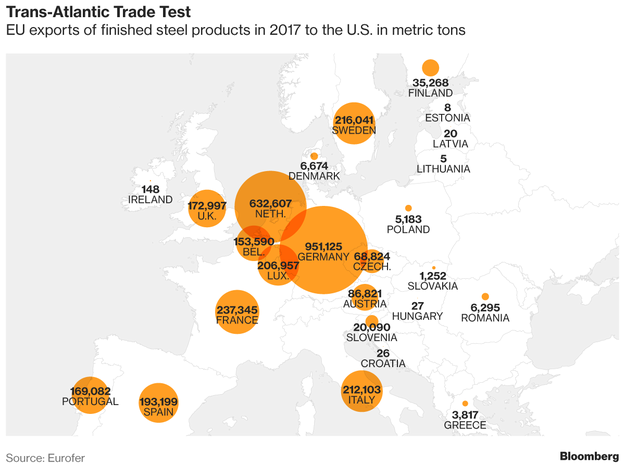 President Trump had postponed the deadline on these tariffs for a number of countries including EU, Canada, and Mexico, to allow negotiations to take place. The EU argues that since the tariffs were issued in the name of national security, and EU is a major defence partner, it should be exempt. The tariffs will come into force on Friday (1st June).

After a last-minute meeting with US Commerce secretary Wilbur Ross, EU Trade Commissioner Cecilia Malmstrom said that a full exemption from the tariffs are unlikely. “Hopefully we will be able to have a positive agenda with the U.S. side, with no tariffs or quotas,” she told the EU Parliament. “Realistically, however, we do not think we can hope for that.”

Ross, who will travel to China for trade talks later this week, warned against retaliation. “We don’t want a trade war,” he said. “(It’s) up to the European Union to decide if it wants to take retaliatory measures. The next question would be: how will the (U.S President Donald) Trump react? You saw his reaction when China decided to retaliate… If there is an escalation it will be because the EU would have decided to retaliate,” he added.

The tariffs would target $7.4 billion worth of metal imports to the US and the bloc has promised “proportionate” retaliation if the measures are imposed. The head of the trade body UK Steel also noted that besides the direct impact the tariffs would have on the EU steel industry, there would also be a surge of Chinese steel coming into the EU, which could further damage the industry. Some goods the EU could target include Harley-Davidson motorbikes, blue jeans, bourbon whiskey, orange juice and peanut butter. Canada and Mexico are also lobbying for exemption from the tariffs.

EU leaders have said that they will not negotiate on trade until the tariff issue is resolved, with French President Emmanuel Macron likening the duty to a gun to the dead. "Unilateral responses and threats over trade war will solve nothing of the serious imbalances in the world trade." Macron said. “Trade wars quickly become war, full stop,” Macron added, noting that in the long term, the only results would be increased prices and unemployment.

Various trade groups, including the American Chamber of Commerce to the European Union, which represents US companies in the region, have spoken against the measures. "These [US] tariff proposals could ignite a dangerous escalation in trade disputes and could also have other unintended consequences. They could have significant implications for jobs, growth and security on both sides of the Atlantic," ACCEU said in a statement.

US and Europe have also disagreed on the Iran sanctions, with President Trump withdrawing from the deal against the advice of allies such as France and Germany. The Iran sanctions will not only affect Iran’s economy but also threaten multiple European companies and billions of dollars in investment. American National Security Adviser John Bolton has warned that countries that “continue to deal with Iran could face sanctions”.

Our assessment is that these tariffs have the potential to negatively impact both the American and global economy. As stated previously, we believe that Trump’s “America first” trade strategy also runs the risk of alienating allies and damaging diplomatic ties. Trump’s actions in Iran have also been against the interest of several security and trade partners. It is possible that affected countries will take the issue to the WTO, as India has done.