US has announced that it is “disinviting” China from its biennial Rim of the Pacific (RIMPAC) exercises. This announcement has come as China has increased its military presence..

The US has announced that it is “disinviting” China from its biennial Rim of the Pacific (RIMPAC) exercises. This announcement has come as China has increased its military presence in the South China Sea, reportedly deploying equipment such as anti-ship missiles, surface-to-air missile systems and electronic jammers in the contested region.

The South China Sea is at the heart of a land and water dispute between China, the United States, and much of Southeast Asia. China’s claim to the region is historic going back to the Xia and Han dynasties. The US has maintained that the region was part of international waters. Other countries that are disputing the South China Sea include Malaysia, Indonesia, the Philippines, and Vietnam. Vietnam has become the most vocal critic of China’s claims to the sea, particularly since Filipino President Duterte’s China-friendly stance.

China has backed its expansive claims with island-building and naval patrols. The United States says it does not take sides in territorial disputes, but has sent military ships and planes near disputes islands, calling them “freedom of navigation” operations to ensure access to key shipping and air routes.

One of the reasons why the South China Sea is so vital to these countries is due to its strategic significance. It is a major trade route; any nation with complete control over the region would be able to disrupt trade shipments to East and Southeast Asia. Currently $5.3 trillion worth of trade passes through the South China Sea. Much of China’s trade also passes through the Strait of Malacca, a narrow passage of water between Peninsular Malaysia and Sumatra, close to Indian naval bases in the Andaman Sea. A single Indian or US aircraft carrier in the strait would leave Beijing compromised. Besides the region’s strategic position, it is also rich in natural resources.

Over the last month, the People’s Liberation Army Navy has been staging successive military exercises across the Western Pacific, and stepping up its presence in the South China Sea. China has built seven man-made islands on reefs in the Spratly Islands. Experts have noted that three of these islands have the capabilities for accommodating fighter jets.  Earlier this month, CNBC reported that China had installed long-range missiles on these three islands. The US threatened “near-term and long-term consequences.”  This deployment marks the first time that long-range, anti-ship, and anti-aircraft missiles have been based there. Read more on this here. 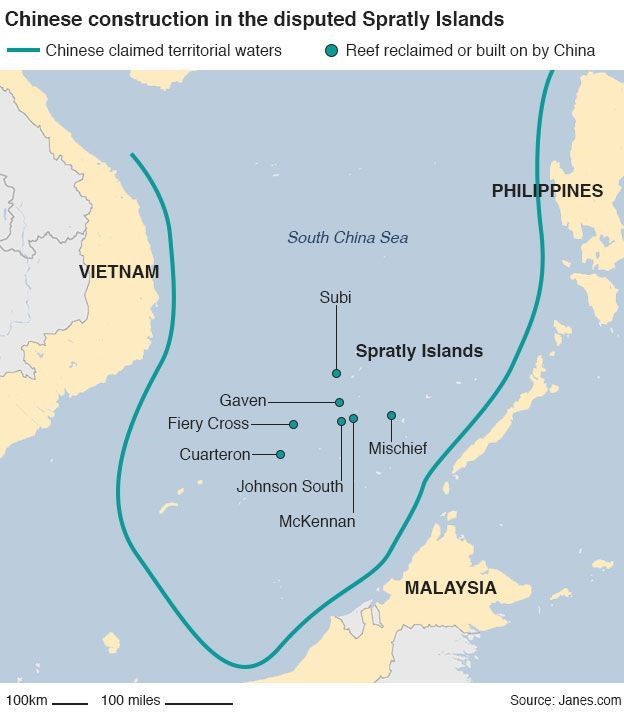 Last week, the Chinese PLA (People’s Liberation Army) Air Force landed strategic bombers in the region, for the first time. These bombers included the nuclear strike capable H-6K. The PLA claimed that this deployment was part of a training exercise. The US Department of Defence said that the move “serves to raise tensions and destabilise the region”.

Now, the US military has “disinvited” China from the 2018 Rim of the Pacific (RIMPAC) exercise. This is “an initial response to China’s continued militarization of the South China Sea,” Pentagon spokesperson Lieutenant Colonel Christopher Logan said. He cited “strong evidence” that Beijing has deployed “anti-ship missiles, surface-to-air missile systems and electronic jammers” to locations in the highly contested Spratly Islands. RIMPAC, hosted by the US, is a biennial military naval exercise held in Hawaii. In 2016, over 40 ships and submarines, 200 aircraft, and 25,000 personnel from 26 countries participated in the exercises. India, Australia, Japan, and the UK are some of these countries.

Some believe that the decision shows that the US no longer intends to appease China. “We're telling the Chinese that there will be diplomatic and potentially economic consequences for further aggression in the South China Sea," Carl Schuster, former director of operations at the US Pacific Command's Joint Intelligence Center, told CNN. However, others, such as former deputy assistant secretary of defense for East Asia, Abraham Denmark, believe that the move is symbolic. “To me it shows that the relationship is veering toward increasingly intense competition and the Pentagon sees diminishing returns on the value of military to military cooperation with China,” Denmark said.

State councillor Wang Yi called the move “unconstructive.” He said that China had the right to build “civilian and some necessary defence facilities on our own islands” and that the move had “nothing to do with militarization.” He also pointed out that China was working on a “much smaller scale” than the US had in Hawaii and Guam.

Last month, in a senate hearing, Admiral Philip Davidson stated that given the recent developments in the region, “China is now capable of controlling the South China Sea in scenarios short of war with the United States.” Davidson added, “Any forces deployed to the islands would easily overwhelm the military forces of any other South China Sea-claimants.” Some analysts have noted that Subi, the largest of China’s seven manmade outposts, houses almost 400 buildings. Subi, along with Mischief and Fiery Cross reefs have extensive infrastructure including “emplacements for missiles, 3 km runways, extensive storage facilities and a range of installations that can track satellites, foreign military activity and communications,” according to a report by Reuters that cites private sector data. Each island could potentially house a regiment.

Our assessment is that China is cementing its control over the disputed Spratly islands. China’s militarization of the highly strategic region is a cause for concern for the region’s other claimants, as well as the international community. China’s weaponization of the Subi, Mischief, and Fiery Cross islands would allow it to intimidate other countries involved through military strength. As stated previously, we believe that China’s recent moves could be the next step in its ambitions to attain complete control over the South China Sea.