Hours after North Korea confirmed that it has successfully test launched its most potent intercontinental missile yet, generals from US and China engaged in talks. These meetings are unusual from both the countries.

United States and China are two of largest economies and political powers in the world. Both countries consider the other as a partner in trade and an adversary in geopolitics. The two nations have had to work together in order to address the increased threat posed by North Korea.

The North Korean nuclear program has been a source of concern for the US and the international community for decades. North Korea has remained an isolated nation for decades. Its nuclear program has especially been a concern for the international community. In 2017, North Korea has launched 23 missiles in the span of 16 tests. In November 2017, North Korea after seemingly two months of silence, tested its most potent missile yet. The Hwasong-15 missile reached an unprecedented height of almost 4,500 kilometers (2,800 miles). The Hwasong-15 is a new type of intercontinental ballistic missile. This represents a serious escalation in the stability of the Korean peninsula.

China is considered the most ally for North Korea. It is North Korea’s largest trade partner. Trade with China represents 57% of North Korea’s imports and 42% of its exports. The country has tried to maintain a diplomatic stance between US and North Korea. It has urged US not to conduct military exercises with South Korea and has implored North Korea to stop testing missiles. It has also approved of the UN sanctions against North Korea that have been repeatedly imposed this year. In February 2017, China announced that it will be suspending all imports of coal from North Korea until the end of 2017. Coal is North Korea’s most vital export commodity. 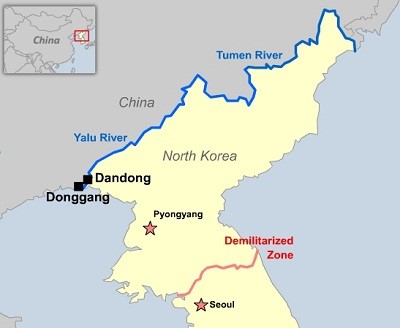 US President Donald Trump has often called on China to be more aggressive in countering the threat posed by North Korea. He has also expressed his frustration on this front in 2017. In November 2017, North Korea successfully tested a new type of intercontinental ballistic missile, which was its most potent missile yet. The nation claims that this was topped with a “super-large heavy warhead.” Based on the distance that it travelled, experts stated that this ICBM could hit anywhere in the US including Washington and New York.

Speaking at an emergency U.N. Security Council meeting, U.S. ambassador Nikki Haley warned, “We have never sought war with North Korea, and still today we do not seek it. If war does come, it will be because of continued acts of aggression like we witnessed yesterday ... And if war comes, make no mistake, the North Korean regime will be utterly destroyed.”

Just hours after North Korea tested its most powerful missile, U.S. and Chinese generals engaged in an unusual set of security talks. This is a rare precedent for both nations and is indicative of the seriousness of the threat posed by North Korea.

“The engagement will serve as an opportunity to discuss how to manage crises, prevent miscalculations, and reduce the risk of misunderstanding,” Gen. Joseph Dunford’s office said in a statement to the AP. Dunford is the chairman of the Joint Chiefs of Staff.

Oriana Skylar Mastro, a Georgetown University professor, said her Chinese contacts indicated willingness to broach North Korea contingencies in the military dialogue. “Things are shifting right now in both China and the United States. There seems to be an opening,” said Mastro. She expected the talks would still be at a preliminary stage. She added that these talks between US and China are likely to be difficult as the two countries are not close allies. She noted, “This type of discussion is difficult among friends. It’s much more difficult between potential adversaries, but absolutely necessary. The type of war that might break out (with North Korea) is one that would be more costly than anything that generations of Americans have experienced.”

China shares a border with North Korea. There are also growing fears within China that North Korea could turn on the nation and become hostile. This would present a clear threat to its security and would destabilize the region further. “The Chinese side is very worried that if North Korea gets word it might turn them into a hostile neighbor,” said Frank Aum, a former Pentagon adviser on North Korea.

China for its part has not divulged details regarding the meetings. Chinese Defence Ministry spokesman Senior Colonel Wu Qian only stated that during these talks, China and US would discuss crisis management and enhance mutual trust. The talks have been scheduled since August 2017. Some experts remain skeptical on whether the two countries can strike a beneficial partnership based on trust. Beijing-based military analyst Zhou Chenming said, “I expect the Chinese and US would have raised the topic of how to respond to a North Korea crisis. But given the lack of deep trust, it’s unlikely a detailed plan was discussed during the meetings.”

Our assessment is that as North Korea continues to develop its nuclear program, the international community must work together to find the right solution to address this increased threat. China and the US are both large military powers and since both nations will be directly affected by a war in the Korean peninsula, they must work together to find a plan for the worst case scenario.