China has planted powerful listening devices in two strategic sea-beds deep in the waters near Guam, America’s biggest military base in the Western Pacific. Six years ago..

China has planted powerful listening devices in two strategic sea-beds deep in the waters near Guam, America’s biggest military base in the Western Pacific.

Six years ago, Lockheed Martin revealed that it was developing similar technology for US submarines. Last year China announced plans to upgrade a civilian network of ­sensors and communications technology deep in the Western Pacific that it says is used in scientific research.

Professor Li Xiaodong, director of the communication acoustics laboratory at the Institute of Acoustics at the Chinese Academy of Sciences, said the technology faced many challenges. Researchers noted that the submerged sensors helped with research into areas such as climate change and ocean ­ currents, and the upgrade would allow the equipment in the buoys to send data directly back to bases in China via satellite technology.

China had deployed hundreds of buoys, including nearly 20 deep anchor points, in the Western Pacific since 2014. But the effective range dropped quickly in the presence of background noises such as ship engines or whale calls.

According to the Chinese government, the cutting-edge acoustic sensors, some of which have a listening range of more than 1,000km – are being used for scientific research such as studying earthquakes, typhoons and whales. However, security experts say the sensors can also track the movement of submarines in the South China Sea and intercept underwater signals between the submarines and their command base.

The high-end surveillance devices have been in operation since 2016, though the information was released by the Chinese Academy of Sciences only this month. One of the acoustic sensors is located in the Challenger Deep of the Mariana Trench – the deepest place on Earth at 10,916 metres beneath sea level – and another is near Yap, an island in the Federated States of Micronesia, the information revealed.

Guam is homebased to the United States’ biggest military base in the Western Pacific and it is also an important resupply and maintenance centre for the submarines of other US naval forces in the Pacific region. Palau is one of the main entry points to the South China Sea for US naval vessels.

The US naval force on Guam is believed to have laid down communication lines on its submarines’ frequently used routes. The cables on the sea floor are connected to devices that can emit or receive sound waves, allowing submarines to stay in touch with the ground command without having to surface for satellite communication and risk exposure.

The US navy has also since 2008 developed a submarine communication system, Deep Siren, which allows subs to release an expendable buoy to the surface and use coustic signals to send and receive messages from the deepest ocean floors. These signals are sent to a satellite controlled by the US National Security Agency and then integrated into its global information grid.

China’s underwater surveillance network can detect such communication as some of its sensors operate at depths similar to those of Deep Siren. The sensors have a maximum working depth of over 12,000 metres, which allows them to work effectively on even the deepest sea floors.

The Chinese academy’s release of information about China’s deep-sea surveillance network comes amid an increasing power play against the US for dominance over the Pacific Ocean. China, the world’s second biggest economy, has been spending generously on military hardware upgrades to assert its growing global interest and influence.

Its increasing activities near Guam have drawn US attention. Scientists on board Chinese research vessels told the South China Morning Post that their operations near Guam had been going on in clear view of US spy planes but they continued with them, insisting they were operating in international waters. 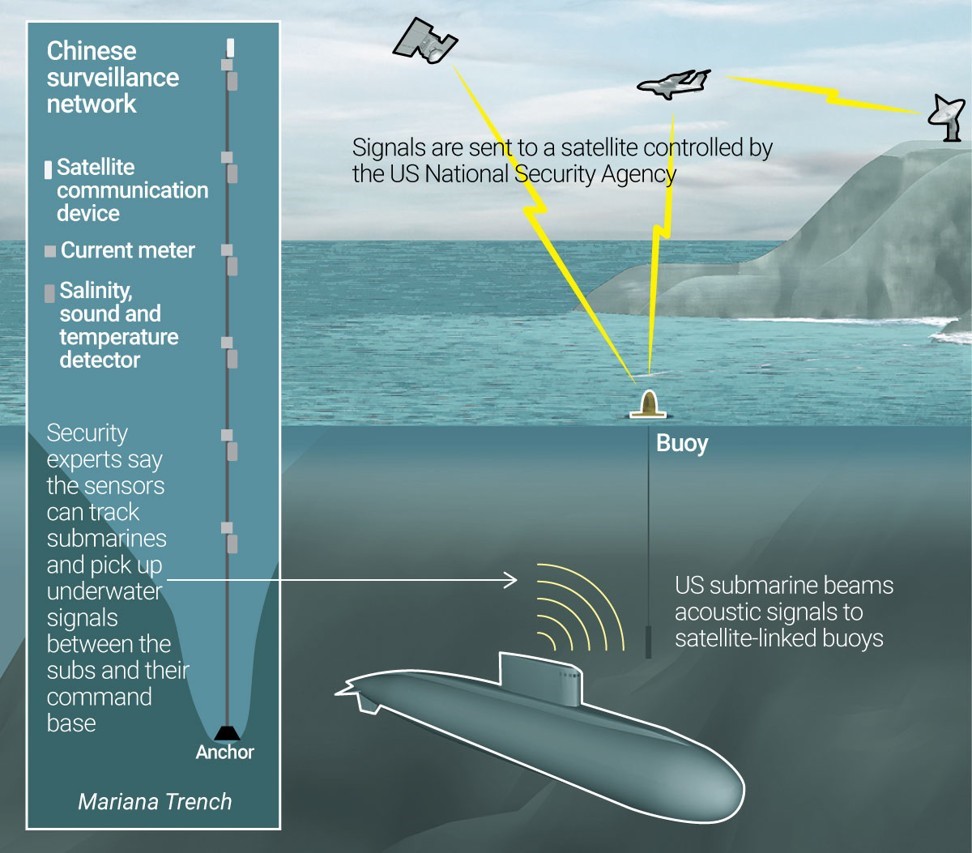 Our assessment is that Guam is part of the Second Island Chain, a military defence line built by the US during the cold war to prevent communist expansion into the Pacific Ocean. We believe that the objective of the Chinese is to break up the island chain and project their naval power in the Pacific region.