UN Running Out of Reserves

UN Secretary General Antonio Guterres said in a letter sent to member states that as of June 30, the core UN budget had a deficit of $139 million and that they had “never faced such a difficult cash flow situation this early in the calendar year.”..

UN Secretary General Antonio Guterres said in a letter sent to member states that as of June 30, the core UN budget had a deficit of $139 million and that they had “never faced such a difficult cash flow situation this early in the calendar year.” 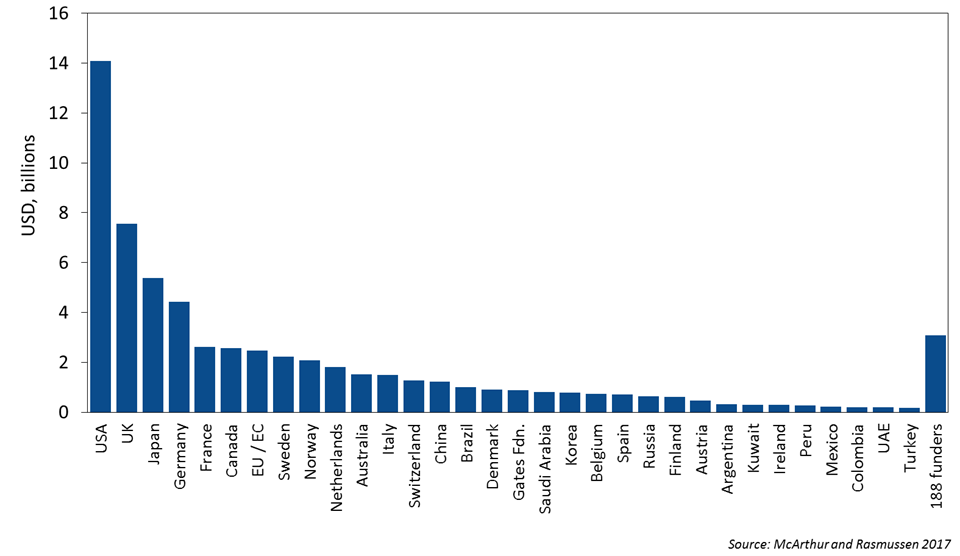 The United Nations (UN) is an international organization founded in 1945, as a replacement for the League of Nations that failed to prevent World War II.  The UN was founded with 51 member states, including India, and has now expanded to 193. It has 6 principle organs, including UNGA and Security Council, and other associated bodies, like World Food Program and the IMF.

The UN is the world’s main organization for deliberating on matters of peace and security, but its work encompasses far more than peacekeeping and conflict prevention. The system includes entities dedicated to areas ranging from health and humanitarian needs to economic and cultural development. As a founding member of the UN and the host for its headquarters, the US has been a chief guide and major funder of the organization for more than seventy years.

All 193 members are required to make conditional payments to certain parts of the organization. The amount each member must pay, known as its assessed contribution, varies widely and is determined by a complex formula that factors in its gross national income and population.

US President Trump has repeatedly been critical of the amount of money that the US funnels to the UN. In 2017, the UN General Assembly voted to cut $600 million from the organization's nearly $8 billion annual peacekeeping budget. After the US, the UK is the second-largest funder at $7.6 billion, followed by Japan at $5.4 billion and Germany at $4.4 billion. These four countries contribute approximately 50% of the total funding. Notably, the Bill & Melinda Gates Foundation is the 17th largest funder and provides more than $880 million per year.

In a bid to address a number of conflict and humanitarian crises taking place across the world, the United Nations has initiated a record plea of $22.5 billion in 2018.

Mandatory contributions help fund the United Nations’ regular budget, which covers administrative costs and a few programs, as well as peacekeeping operations. The US pays 22 and 28% of these budgets, respectively. Assessed dues also finance other UN bodies, including the International Atomic Energy Agency and the WTO. On the other hand, UNICEF, UNHCR, WFP and other ancillary organs rely on discretionary funding.

The US is currently the largest donor to the UN and Trump has been critical to that fact. The nation contributed $611 million in 2017 to the UN budget of $2.5 billion. Additionally, the US contributes more than $2 billion to multiple UN programs including the World Food Program and UN Peacekeeping.

Stephane Dujarric, spokesman for Secretary-General Antonio Guterres, said in a statement “The figures presented would simply make it impossible for the U.N. to continue all of its essential work advancing peace, development, human rights and humanitarian assistance.”

However, President Trump’s 2018 budget would limit payments to UN climate change programs and cap the US contribution to the peacekeeping budget at 25%. Since formally withdrawing from the Human Rights Council, the US will no longer provide any funding for the committee, endangering thousands of lives in Palestine, Yemen, Myanmar and so on which are reliant on the aid.

According to the UN, 112 out of 193 member states have so far paid their share of the core budget.  In 2017, 116 countries had paid, compared with 98 in 2016. The US, which is responsible for 22% of the budget, traditionally pays later because of its budget year. However, the remaining permanent members have paid up for the year.

As per UN rules, if a country is in arrears in an amount that equals or exceeds the contributions due for the previous two years, it can lose its UNGA vote unless the country can show its inability to pay is beyond its control. Currently Comoros, Guinea Bissau, Sao Tome and Principe and Somalia are significantly in arrears but have been allowed to retain their vote. Only Libya is unable to vote.

Disgruntled UN staff in Geneva have been protesting against a 7.5% cut to their salaries since May 2017, which is equivalent of almost one month’s pay. The pay cut was proposed by a group of independent experts, the International Civil Service Commission (ICSC). Nevertheless, they are  moving toward implementing reforms to revamp in-country coordination.

Even accounting for inflation, annual UN expenditure is 40 times higher than it was in the early 1950s.  Many organisations have overlapping mandates and bureaucracy has slowed down the management of development issues.

Our assessment is that despite the increased number of humanitarian crises across the world, it is unlikely that the UN will be able to raise the intended amount to fund for aid, especially as protectionist policies are being steadily adopted. We, however, believe that the UN cannot be negated in the current world, as their logistical capabilities and international support is necessary to manage crises. We feel that if they fail to raise funds, staff lay-offs and subsequent protests will be more common.