UK on the rise?

The value of the UK Pound has risen, and the Sterling is now at a fresh post-Brexit-vote high close to $1.41. There has been growing confidence in UK’s economy despite..

The value of the UK Pound has risen, and the Sterling is now at a fresh post-Brexit-vote high close to $1.41.

There has been growing confidence in UK’s economy despite concerns raised over Brexit. The Pound did well against the Euro as well. It was up 0.3 percent at a five-week high of 87.615 pence.

Experts have voiced concerns over the stability of the region’s economy post Brexit. At first the outlook seemed optimistic as UK’s economy grew at a higher than expected rate for the first three months after the vote. However, this trend reversed in 2017. Based on its performance post the vote, the International Monetary Fund had predicted that the UK would grow at 2% in 2017. However, it lowered its forecast in July announcing that growth rate was likely to be 1.7%. Commenting on the growth, IMF said that UK’s performance has been “tepid.” 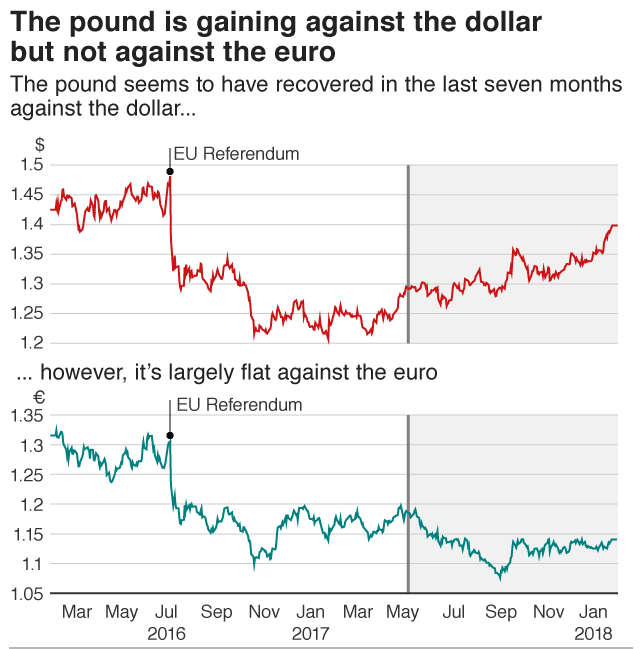 A decade after the financial crisis, economies have begun showing signs of recovery. In 2017, International Monetary Fund (IMF) projected a higher than expected growth for China, Japan and the Eurozone countries like Germany, France, Italy and Spain. Due to the strong performances expected from these nations, global growth is expected to be 3.5%.

Analysts have also been optimistic about UK’s economy as it looks like it will be a ‘soft Brexit’. There have been fears that a ‘hard Brexit’ would leave companies and organizations in the UK at a disadvantage in Europe as they would no longer be allowed to be part of EU’s single market. However, Bloomberg has since reported that Spanish and Dutch finance ministers have agreed to push for a Brexit deal that keeps Britain as close to the European Union as possible. There is also increased optimism about the future of trade in the region. French President Emmanuel Macron recently noted that UK could strike a trade deal with the EU in the wake of Brexit.

"There is definitely a feeling that Brexit is now far more likely to be 'soft', which underestimates the risk for more problems ahead in our view but for the time being is leading to demand for [the pound]," said John Marley, head of FX strategy at currency advisers Infinity International.

The value of the UK Pound has risen, and the Sterling is now at a fresh post-Brexit-vote high close to $1.41. Experts have stated that the weakened Dollar has also played a role in the rise in the value of Pound. “Certainly, dollar weakness is a part of this move higher. But this is also a story of sterling resilience,” said Jane Foley, a London-based FX strategist at Rabobank.

However, not all analysts are confident about the UK’s growth prospects. In January 2018, the International Monetary Fund downgraded its outlook for UK growth for 2019. In its latest forecast, the IMF projects growth for Britain of 1.5 per cent next year, down from 1.6 per cent previously. UK will officially leave EU in 2019.

Our assessment is that a strong world economy has helped boost UK’s own growth potential. The prospect of a “soft Brexit” has also resulted in investor confidence. We believe that the present growth will soften the impact that the UK’s economy would face due to Brexit.