The Bank of England, the region’s central bank has indicated that it would be further increasing the interest rates as early as May 2018. Mark Carney, BOE’s Governor..

The Bank of England, the region’s central bank has indicated that it would be further increasing interest rates - as early as May 2018. Mark Carney, BOE’s Governor has noted that the bank will be introducing higher interest rates in the near future as the global economy continues to grow.

The Bank of England is the central bank of the United Kingdom. It was established in 1694. It is the 8th oldest bank in the world. It was called the Governor and Company of the Bank of England before it assumed its new name. It was nationalized in 1946; prior to that, it was owned by stockholders.

It is the main regulator in the United Kingdom. The establishment became an independent public organization in 1998. It is owned by the Treasury Solicitor on behalf of the government. It is independent from the government in terms of setting the monetary policy.

The interest rate is the percent of principal charged by the lender for the use of its money. The principal is the amount of money lent. Shifts in interest rates have an effect on the building blocks of macroeconomics, such as consumer spending and borrowing.

Experts have voiced concerns over the stability of the region’s economy post Brexit. At first the outlook seemed optimistic as the UK’s economy grew at a higher than expected rate for the first three months after the vote. However, this trend reversed in 2017. Based on its performance after the vote, the International Monetary Fund had predicted that the UK would grow at 2% in 2017. In January 2018, the International Monetary Fund downgraded its outlook for UK growth for 2019. In its latest forecast, the IMF projects growth for Britain of 1.5 per cent next year, down from 1.6 per cent previously. 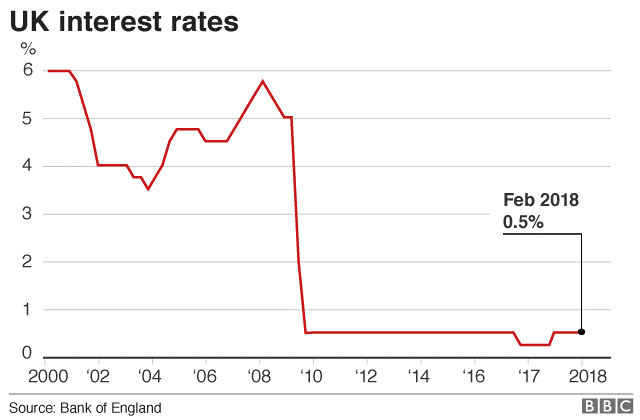 On November 2017, for the first time in more than 10 years, the Bank of England raised interest rates. The interest rate was increased from 0.25% to 0.5%. The last time the interest rate was raised was in 2007. Mark Carney, the Bank’s governor, said it was time “to ease our foot off the accelerator” but sought to reassure consumers and businesses that the first increase in rates since July 2007 was not the start of a sustained upward trend.

Only months after increasing the interest rates, Bank of England has indicated that it will continue the raise as long as the economy continues to grow. In 2017, IMF projected a higher than expected growth for China, Japan and the Eurozone countries like Germany, France, Italy and Spain. Due to the strong performances expected from these nations, global growth is expected to be 3.5%.

The Bank’s governor, Mark Carney, had previously suggested there could be two further rate hikes to curb inflation over the next three years – but speculation will now mount over the chance of additional rate hikes. He spoke to the media noting, “We're not going to tie our hands to a specific path for rates going forward. We are reiterating that these interest rate cycles are unlike those we would've experienced in the past.”

One of the reasons why the central bank may raise the interest rates is due to the region’s high inflation rates. U.K. inflation in November hit a five-year high of 3.1 percent. It has since moved to 3 percent.

Analysts at Barclays said that the BOE's comments and projections seemed to point towards a hike in August, but believed the central bank could also consider a hike in May. "(But it) would then need to argue much more convincingly that the British economic and political backdrop supports such a step change," Fabrice Montagne and Sreekala Kochugovindan said in a research note.

The Asian markets experienced a steep decline after news emerged of an increase in interest. Stocks in Singapore, Malaysia, Hong Kong, Tokyo and Australia all were down when their respective markets opened.

Our assessment is that the hike in the interest rates is indicative that economies have begun to recover from the global recession. There are some concerns that cloud over UK’s economy – Brexit being the key issue. Currently the negotiations between EU officials and British authorities have stalled. There are also concerns London will lose tens of thousands of jobs, especially in the financial sector, due to Brexit.