For the first time in more than 10 years, the Bank of England has raised interest rates. The interest rate has been increased from 0.25% to 0.5%.

The last time the interest rate was raised was in 2007.

The Bank of England is the central bank of the United Kingdom. It was established in 1694. It is the 8th oldest bank in the world. It was called the Governor and Company of the Bank of England before it was changed to the current name. It was nationalized in 1946; prior to that, it was owned by stockholders.

It is the main regulator in the United Kingdom. The establishment became an independent public organization in 1998. It is owned by the Treasury Solicitor on behalf of the government. It is independent from the government in terms of setting the monetary policy.

Post the September 11, 2001 attacks, the US Federal Reserve stimulated the struggling U.S. economy by cutting interest rates to historically low levels. This resulted in a boom in the real estate market. Lenders began to extend mortgages to millions who couldn’t qualify for traditional bank loans. Housing prices therefore peaked in early 2006 and began to decline in 2006 and 2007. Many of the subprime mortgages were affordable in the beginning but rates spiked in 2007. In the meltdown that occurred in the wake of this crisis, several banks in Wall Street had to declare bankruptcies and a global recession followed. It is considered one of the worst financial crises.

The interest rate is the percent of principal charged by the lender for the use of its money. The principal is the amount of money lent. Shifts in this crucial interest rate have a drastic effect on the building blocks of macroeconomics, such as consumer spending and borrowing. 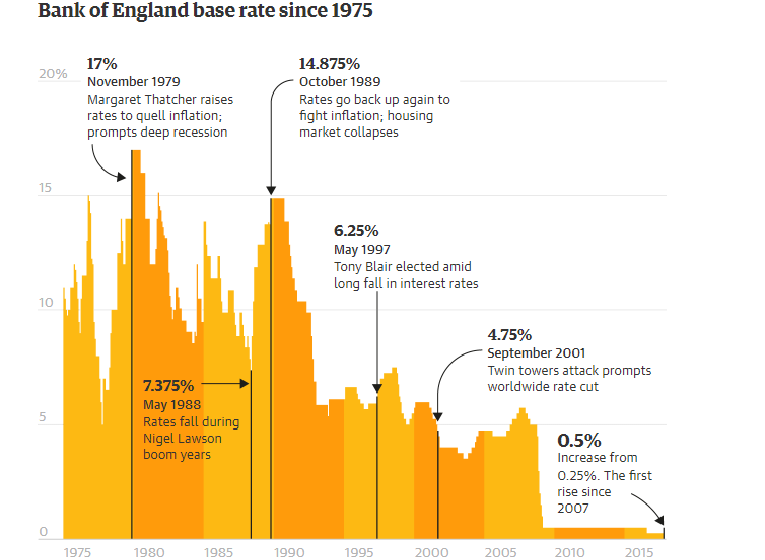 The Office of National Statistics released data in June 2017 confirmed that UK’s GDP has increased by 0.3%. For the first time in more than 10 years, the Bank of England has raised interest rates.

Mark Carney, the Bank’s governor, said it was time “to ease our foot off the accelerator” but sought to reassure consumers and businesses that the first increase in rates since July 2007 was not the start of a sustained upward trend.

He said: “To be clear, even after today’s rate increase, monetary policy will provide significant support to jobs and activity. And the monetary policy committee continues to expect that any future increases in interest rates would be at a gradual pace and to a limited extent.” Carney added that the target for inflation is still 2%. “We’re going to be in exceptional circumstances for a period of time, certainly until there’s clear resolution of the future relationship [with the EU], and even then, maybe longer than that.”

Almost four million households face higher mortgage interest payments after the rise, but it should give savers a modest lift in their returns. David Blanchflower, a former member of the MPC, criticised the rate rise and said it would be reversed. “This is guessonomics. There is nothing in the data to sustain this rise.”

Alan Clarke, an economist at Scotia Bank, said, “These comments confirm to us that wage data will be absolutely crucial in the early months of 2018 in dictating how soon the next rate hike can be expected to arrive.”

Households that have variable rate mortgages will suffer the most from the hike in the interest rates. Authorities have justified the hike by stating that there has been a drop in the unemployment rate and that the global economy is on the rise. Inflation has also risen. Carney has stated that he expects UK to grow by 1.7% over the next few years. Brexit is a cause of concern when it comes to potential growth rate of the UK economy. Carney said, “Looking ahead, he said: "The biggest determinate of our outlook is going to be those negotiations ongoing on Brexit - both a transition deal to a new arrangement and what is the longer form arrangement with the European Union."

The markets did not react favorably to the hike. The Pound fell about 1% against the Euro and the Dollar. Bank of England has vowed that any future rises would only be gradual.

Our assessment is that the hike in the interest rates is indicative that economies have begun to recover from the global recession. There are some concerns that cloud over UK’s economy – Brexit being the key issue. Currently the negotiations between EU officials and British authorities have stalled. There are also concerns London will lose tens of thousands of jobs, especially in the financial sector, due to Brexit.