A Twisted Road to Green

The recently released ‘India State of Forest Report 2021’, a much-awaited event prepared by the Forest Survey of India (FSI), has painted a rather optimistic picture of the country’s precious forest cover. According to it, the forests are finally recovering from decades of exploitation. Can these claims be taken at face value?

The 2021 report claims that India’s forest and tree cover increased by more than 1,500 sq km between 2019 and 2021. While it strengthens India’s stand in the comity of nations on the pressing issue of climate change, there are many critics who question these assertions.

The reported increase in forest cover in 2021 was primarily led by the rise in open forest areas used for commercial plantations. In contrast, moderately dense forests or areas near human habitations were on a decline during the period. Statistics indicate that of the forest added since 2019, only 31 sq km came in “recorded forest areas.” 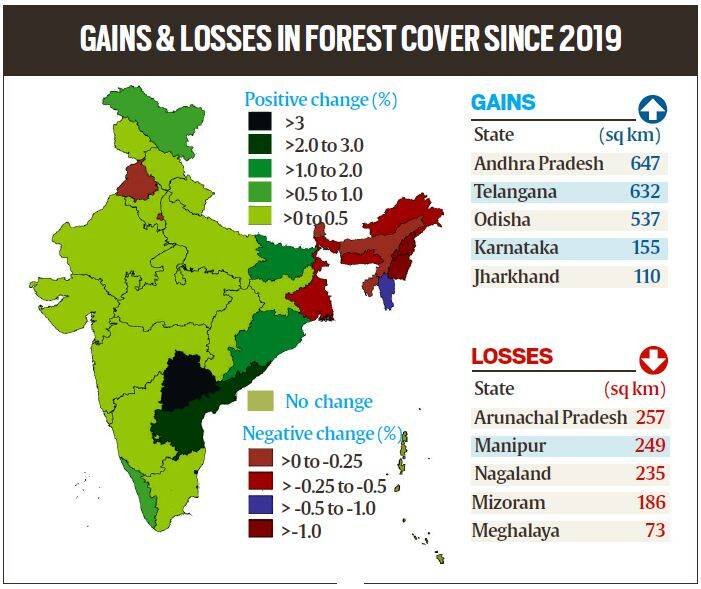 The fact that the Food and Agricultural Organisation (FAO) brought plantations within the ambit of forests in 2017 has been widely criticised by more than 200 scientific bodies, conservation agencies and NGOs. Plantations cannot be compared to natural forests since they might have aged trees of the same species, which are of economic value but quite unlike a diverse forest.

That said, India's forest cover is not equally distributed and has implications for economic equity across the country. As per the report, Madhya Pradesh has the largest forest cover in the country, followed by Arunachal Pradesh, Chhattisgarh, Odisha and Maharashtra. In terms of forest cover as a percentage of total geographical area, the top five states are Mizoram (85.41 per cent), Arunachal Pradesh (79.63 per cent), Meghalaya (76.33 per cent), Manipur (75.46 per cent) and Nagaland (75.31 per cent), which are all from the northeastern region of the country. It may be noted that in the development index, these states do not rank very high.

The report’s definition of a ‘forest patch’ included wooded parks within cities with exotics greater than one hectare. This is part of the National Action Plan on Climate Change which attempts to bring a third of its land area under forest cover in a decade or so. Critics do not seem to be in agreement as they feel that it is just an attempt at ‘green washing to show we have 33 per cent tree cover.’

This has been further compounded by the fact that a lot of unverifiable data finds its way when such reports are being compiled. For one, the forest cover data used by the FSI is not in the public domain, making it difficult to verify the extent to which India's forest cover increased. Furthermore, there are some inconsistencies in the figures of the National Remote Sensing Centre (NRSC) and the Report. For example, between 1995-1996 and 2011-2013, the FSI reported a sharp increase in forest cover (over 6 million hectares), whereas a 2015 NRSC-led study pointed towards a gradual decline.

India's North-Eastern region is home to a great biodiversity. Loss of forest cover in this diverse bio region cannot be offset by monoculture plantations. The North-Eastern states need huge infrastructural development, and the pursuit of such endeavours will only add pressure on the diminishing forest cover of the region. "The Central government’s ‘Look East’ and other policies directed at infrastructure expansion in the northeast can be understood to be one of the significant factors contributing to the loss of area under forest", states Kanchi Kohli, an environmental policy expert and senior researcher at the Centre for Policy Research, New Delhi.

The disappearance of forest cover is endemic globally. The top 10 countries account for 66 per cent of the world's forest area. Of these, Brazil (59%), Peru (57%), the Democratic Republic of Congo (56%) and Russia (50%) have half or more of their total geographical area under forests. However, except perhaps for Russia, the rest are rapidly sacrificing these forests at the altar of economic development. Therefore, a healthy environmental policy has to be an active relationship between the habitat and the people it supports through its natural resources.

The intense debate over the diminishing global forest cover is symptomatic of the underlying tension between the developed, industrialised West and the developing countries. It is no secret that economic prosperity and care for the environment have been at opposing ends of the development spectrum for many centuries now. The resulting debilitating effect on the planet is for everyone to see.

Greening and replenishing our forest cover raises important existential questions about priorities and responsibility. Developing countries such as Brazil have pushed back on the demands of the West to prioritise forest cover since, very often, protection of the environment is at loggerheads with infrastructure projects which support the economic development of the country. It is not very different in the North-East part of India too. Forest cover is unevenly distributed across the country, and its concentration in the Northeast region is a reflection of the state of economic development in the region and the mutually supporting relationship between the locals and their environment. Poverty is an unfortunate common underlying theme in these 'eco-friendly' environments. It raises uncomfortable questions about the contradiction between economic prosperity and safeguarding the environment.