Turkey’s lira has fallen to a record low against the dollar and its $ 900 billion economy is teetering on the edge of a full-blown financial crisis. The US doubled the tariffs on steel and aluminium which further triggered the currency fall. Relations between the US and Turkey have certainly not been at its best in recent months, primarily...

Turkey’s lira has fallen to a record low against the dollar and its $900 billion economy is teetering on the edge of a full-blown financial crisis.

The US doubled the tariffs on steel and aluminium, which further triggered the currency fall.

Relations between the US and Turkey have certainly not been at its best in recent months, primarily over disagreements on Syria. The latest dispute was over the decision by a Turkish court to extend the detention of Andrew Brunson, an American pastor accused of espionage for Kurdish militants and the Gülen movement, a group accused of masterminding the 2016 coup. Turkey had also pledged to buy the S-400 missile defense system from Russia, a step that strained its ties with the broader Nato alliance. When Donald Trump announced economic sanctions against Iran last week, Erdoğan pointedly refused to take part. 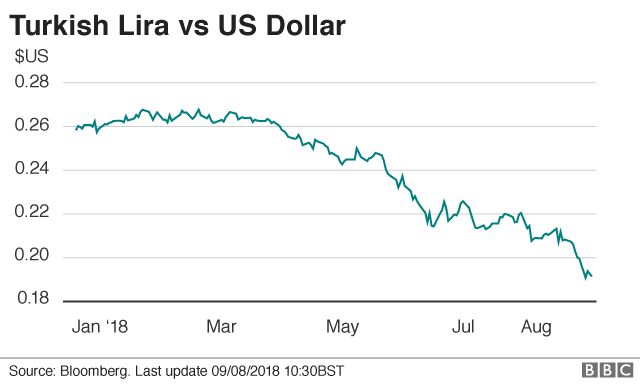 Read more of our extensive analysis on Turkey and sanctions here

Global markets are braced for another hectic day of trading amidst Turkey’s unfolding economic crisis after the country’s currency, the lira, plunged 20% to record lows on Friday.

Trump chose his moment well. On Friday, when Turkey was in chaos, he announced that he was doubling tariffs on imported steel and aluminium, vital to the Turkish economy. Recep Tayyip Erdoğan, Turkey’s president, remained defiant over the weekend, accusing foreign interests of waging an economic war against Turkey and pledging trade measures to reduce reliance on the dollar and US markets.

The value of Turkey's currency has nosedived since January and has lost more than 34% of its value against the dollar. It hit a record low on Thursday evening, reaching 6.30 to the dollar, although it has since recovered slightly. The stock market has also fallen 17%, while government borrowing costs have risen to 18% a year. Meanwhile, inflation in Turkey has hit 15%. Investors are worried that Turkish companies that borrowed heavily to profit from a construction boom may struggle to repay loans in Dollars and Euros, as the weakened lira means there is now more to pay back.

While the trigger for the stunning episode was the new US sanctions, many investors believe that the $900 billion economy was already headed towards a cliff. Years of a growth-at-all costs policy bias have left companies saddled with hundreds of billions of dollars in foreign debt, runaway inflation and one of the largest current –account deficits.

The financial spiral is already showing signs of spilling over into the rest of Turkey’s economy. It’s private companies have borrowed heavily in foreign currencies and now sit on a pile of debt equivalent to about 40% of yearly economic output. Investors now believe that Turkey’s central bank will have to announce a significant increase to its 17.75 benchmark rate just to prevent a freefall as it touches levels that had been unimaginable even a few months ago.

As the crisis has deepened, Turkish consumers have faced rising food, fuel and medicine prices. The inflation rate is expected to jump rapidly from the current 15.4% official rate to over 20%.

Erdoğan’s answer to the financial crisis is for his followers should do their patriotic duty and exchange rapidly appreciating US dollars for ever-more worthless Turkish lira. Indeed, it will merely add to the belief in the world’s financial markets that a man who has lost touch with reality is leading Turkey.

Erdoğan’s next move might be to impose capital controls. However, as Paul Greer of Fidelity International notes, Turkey is a relatively open economy and requires a large amount of finance from overseas. Capital controls would not work on their own and would need to be supplemented by a rescue package from the International Monetary Fund.

Our assessment is that Turkey has to address three key issues, the bone of its current predicament: an overheating economy, Erdoğan’s attempts since his re-election in June to prevent the central bank from taking the necessary action to deal with rising prices and the stand-off with the US. We feel that events in Turkey could be a signal for what lies ahead for assets and economies that were inflated by cheap debt. We feel that Erdogan might be compelled to compromise with Trump over Brunson because he is damaging the economy by continuing with a fight he might not be able to win.