US President Donald Trump has warned the Syrian government and its Russian and Iranian allies against "recklessly" attacking rebel-held Idlib province. Idlib is the last remaining base for the Syrian rebels, who have faced an onslaught from President Assad’s forces. The Syrian Civil War has been going on since 2011..

US President Donald Trump has warned the Syrian government and its Russian and Iranian allies against "recklessly" attacking rebel-held Idlib province.

Idlib is the last remaining base for the Syrian rebels, who have faced an onslaught from President Assad’s forces.

The Syrian Civil War has been going on since 2011. It began during the Arab Spring protests and was triggered by resentment towards the government of President Bashar al-Assad. The war is being fought by several factions: the Syrian government and its allies, a loose alliance of Sunni Arab rebel groups (including the Free Syrian Army), the majority-Kurdish Syrian Democratic Forces (SDF), Salafi jihadist groups (including al-Nusra Front) and the remaining fighters of the Islamic State of Iraq and the Levant (ISIL).

There are also a number of countries in the region and beyond who are either directly involved, or rendering support to one or other faction. Iran and its proxy Hezbollah, along with Russia have been aiding President Assad’s forces by providing tactical and strategic support. The United States, France and the UK, have been covertly supplying rebels with ammunitions and resources.

After seven years of fighting, 400,000 people are dead which has led to more than half the population being driven out of their homes. Idlib, is a haven for rebels and their families, who have been evacuated out of areas reclaimed by the government. However, there is no place for them to move within Syria if they are to abandon the province now. 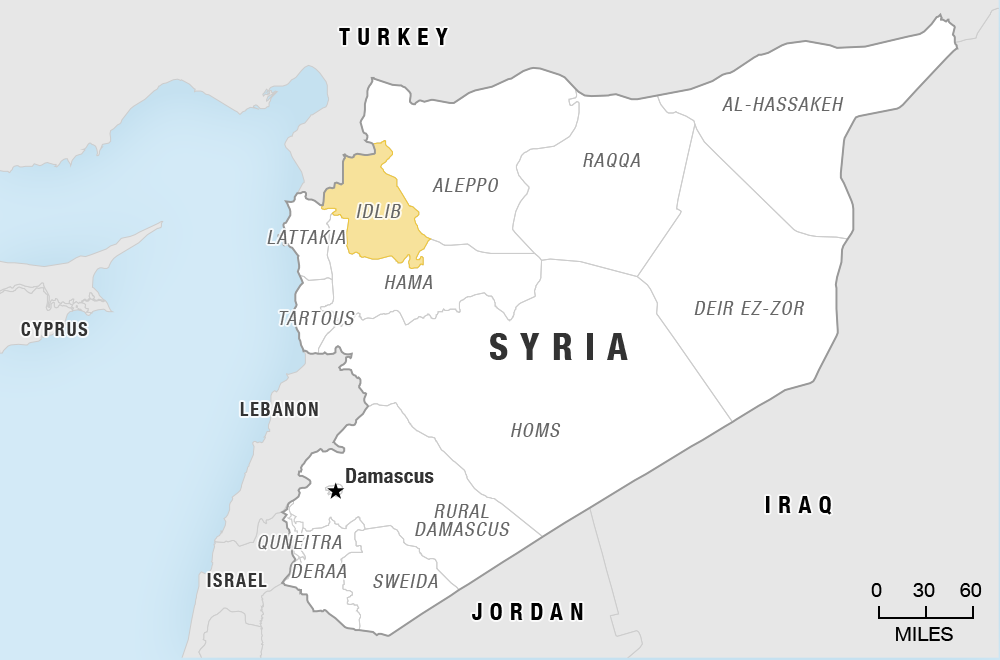 President Donald Trump has fired a warning shot at the UN and Syria’s allies about the prepared offensive on the city of Idlib. In a tweet he warned of "a grave humanitarian mistake" in which hundreds of thousands of people could be killed.

Syrian government forces are said to be preparing a huge offensive on the last major rebel stronghold in the country. The UN says such a campaign could be disastrous for thousands of civilians. The US State Department also warned on Monday that Washington would respond to any chemical attacks by the Syrian government or its allies. With rebels defeated in most of Syria, the offensive in the northern province could prove to be the last major battle of the Syrian civil war. According to a UN estimate, there are about 10,000 al-Nusra and al-Qaeda jihadist fighters still holding out in Idlib. Sources say that President Bashar al-Assad was preparing a phased offensive.

Russian Foreign Minister Sergei Lavrov has said "terrorists" must be wiped out in Idlib, accusing them of using civilians as human shields. The UN envoy to Syria Staffan de Mistura has warned of a "perfect storm" if the government goes ahead with its threatened offensive in Idlib. He called for humanitarian corridors to be set up to allow civilians to be evacuated temporarily. The jihadists must be defeated, Mr. de Mistura said, but not at the expense of thousands of civilian lives.

The UN is desperate to avoid the deaths of civilians which have been seen recently in other parts of Syria such as Aleppo, Raqqa or the Eastern Ghouta, and its diplomats are appealing for all sides to show restraint.

Mr. de Mistura offered to go to Idlib personally to set up a humanitarian corridor which, he acknowledged, would mean evacuating people into government-controlled territory.

Our assessment is that Assad’s forces will shortly retake Idlib as the rebels have been cornered in this civil war. Russia’s calculated air strikes, coupled with Iranian ground support have enabled Syrian Governments Forces to retake key cities in the past year. We feel that President Trump is right about an impending humanitarian crisis. However, we believe that the State department will issue a final ultimatum against excessive use of force in Idlib in the coming days.