UK Prime Minister Theresa May have once again spoken against the US President Donald Trump. After he retweeted a series of anti-Muslim videos published by a member..

UK Prime Minister Theresa May have once again spoken against the US President Donald Trump. After he retweeted a series of anti-Muslim videos published by a member of the far-right political group, Britain First, he has come under fire from politicians in the UK. May noted that Trump’s actions was the “wrong thing to do.”

US President Donald Trump is a polarizing figure who is known for his fiery populist nationalism. He has been criticized for anti-Muslim rhetoric. In 2016, as a Presidential candidate, Trump called for a “complete” shut down of letting Muslims to enter the US. At the time he said, “Without looking at the various polling data, it is obvious to anybody the hatred is beyond comprehension. Where this hatred comes from and why we will have to determine. Until we are able to determine and understand this problem and the dangerous threat it poses, our country cannot be the victims of horrendous attacks by people that believe only in Jihad, and have no sense of reason or respect for human life.”

After being sworn in, mass protests broke out after he initiated the travel ban which was colloquially called Muslim ban. Issued in 2017, it called to restrict entry into the United States. The actions included two executive orders for restrictions on citizens of seven (first executive order) or six (second executive order) predominantly Muslim countries. A third action, done by a proclamation, restricted entry into the U.S. to citizens of eight countries, six of which are predominantly Muslim.

In November 2017, Donald Trump retweeted a handful of anti-Muslim videos posted by the deputy leader of Britain First. They were unverified and purported to show a group of Muslims pushing a boy off a roof. Another claimed to show a Muslim destroying a statue of the Virgin Mary, and a third claimed to show a Muslim immigrant hitting a Dutch boy on crutches. The credibility of the last video was immediately called into question when the Dutch embassy in the US confirmed that the person initiating the violent act in the video was born and raised in Netherlands. 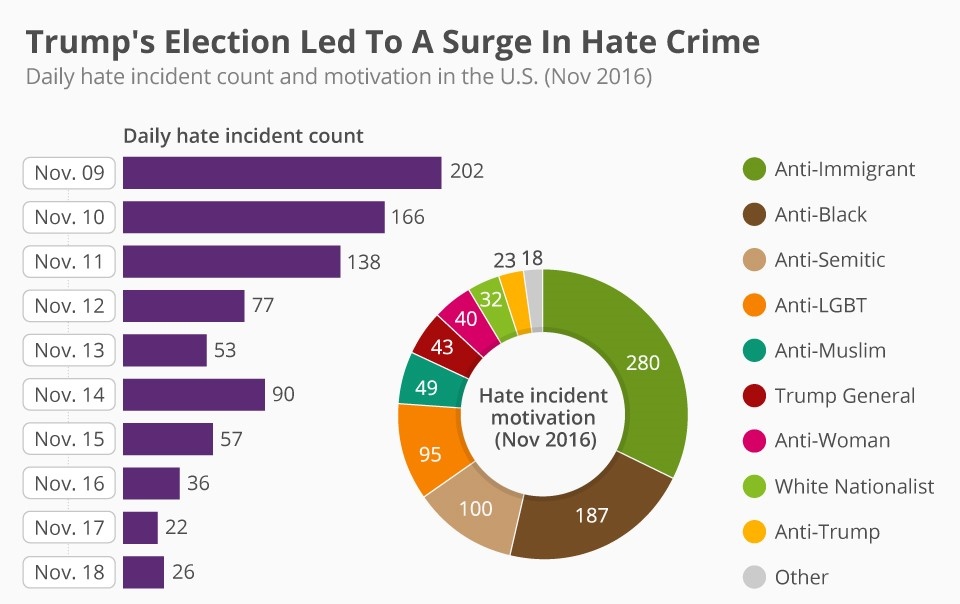 Trump’s actions on his Twitter account was met with near universal condemnation from politicians from the UK. UK Prime Minister Theresa May through her spokesperson issued a statement immediately noting, “Britain First seeks to divide communities by their use of hateful narratives that peddle lies and stoke tensions. They cause anxiety to law-abiding people. British people overwhelmingly reject the prejudiced rhetoric of the far right which is the antithesis of the values this country represents, decency, tolerance and respect.”

Trump reacted to her statement by lashing out at her through Twitter stating, “Theresa @theresamay, don’t focus on me, focus on the destructive Radical Islamic Terrorism that is taking place within the United Kingdom. We are doing just fine!” He had reportedly tagged the wrong Twitter handle in the Tweet.

Despite this, May once again doubled down and clearly noted what Trump did in the past few days was “the wrong thing to do.” Quizzed about Trump's tweets, she said: "The fact that we work together does not mean that we're afraid to say when we think the United States has got it wrong, and be very clear with them. And I'm very clear that retweeting from Britain First was the wrong thing to do."

Theresa May wasn’t alone in condemning Trump. The UK ambassador in Washington, Kim Darroch, complained to the White House. London's mayor, Sadiq Khan, said in a statement, “President Trump yesterday use Twitter to promote a vile, extremist group that exists solely to sow division and hatred in our country. As the mayor of this great diverse city, I have previously called on Theresa May to cancel her ill-judged offer of a state visit to President Trump. After this latest incident, it is increasingly clear that any official visit at all from President Trump to Britain would not be welcomed.” Trump has previously criticized Khan through Twitter.

In the House of Commons other MPs criticized Trump in unusually blunt language. Opposition Labour's Naz Shah accused him of promoting "the hate-filled ideology of fascism". Conservative Tim Loughton requested Twitter to suspend Trump’s account as he peddled "hate crime". Britain's Middle-East Minister Alistair Burt tweeted: "The White House tweets are both alarming and despairing tonight. This is so not where the world needs to go."

The White House and officials from Downing Street are currently working on logistics for an upcoming official trip that Trump is slated to make. The dates and the schedule haven’t been fixed yet but there is a growing chorus of voices calling for the cancellation of the trip. Many have also stated that the Queen should not have to host Trump.

Our assessment is that it is extremely rare for politicians from the UK to harshly criticize a sitting US President as the two nations are close allies. However, Trump’s actions have prompted universal condemnation that threatens the core of this “special relationship.” This also casts a doubt over Trump’s state visit to the region. It is likely that the trip will be delayed until the situation stabilizes.