Trump to impose tariffs on China

US President Donald Trump has reportedly decided to impose tariffs worth $50 billion on Beijing. Experts have warned that these measures could result in a global trade war..

US President Donald Trump has reportedly decided to impose tariffs worth $50 billion on Beijing. Experts have warned that these measures could result in a global trade war.

President Trump is known to have a protectionist outlook on trade. On the campaign trail, he promised tariffs against countries such as China, with whom the US has a $337 billion trade surplus. He has blamed China for loss of jobs. He also criticized “bad” trade deals and “unfair trade practices” against America. He said that other countries were "dumping vast amounts of steel all over the United States, which essentially is killing our steelworkers and steel companies”.

In recent months, experts have begun sounding the alarm about an impending trade war between US and China, the two largest economies in the world. These fears solidified in March, when Trump announced global import tariffs of 25% on steel and 10% on aluminium. The President cited “national security” in order to circumvent WTO commitments. Since then, tensions have escalated. The US has imposed tariffs worth over $150 billion; Beijing responded with $50 billion worth of tariffs.

During trade talks in Beijing this May, US officials reportedly called for China to cut the trade deficit by $200 billion. However, a later round of trade talks that ended on a positive note, led people to believe that tensions would de-escalate. Treasury Secretary Steve Mnuchin stated that the two nations would be putting the trade war on hold. China agreed to increase its imports of US goods and cut the trade deficit, and President Trump lifted sanctions on ZTE. 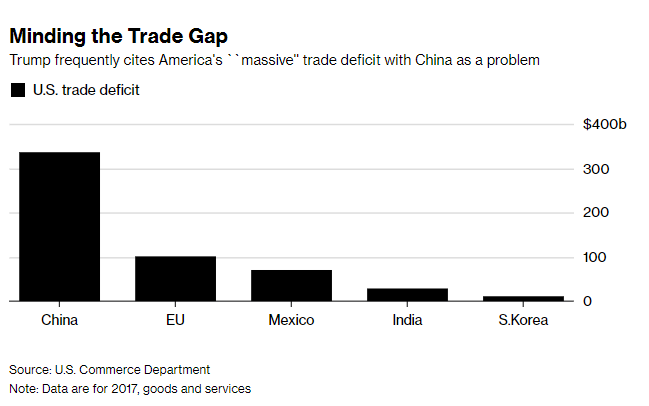 Two weeks ago, the White House announced that it would be moving forward with tariffs against China. US President Trump has now decided to impose $50 billion worth of tariffs on Chinese imports, sources said. The move, to be announced on Friday, will hit Chinese products linked to Xi Jinping’s “Made in China 2025” plan with a 25% import duty. Officials in Washington have reportedly reduced the list, which originally included 1,300 items, to 800.

Beijing has stated that it will retaliate to these measures. “If the US imposes unilateral and protectionist measures that harm China’s interest, we will immediately respond using the necessary measures to firmly defend our legitimate interests,” Chinese Foreign Ministry spokesperson Geng Shuang said.

“I stressed how important it is for President Trump to rectify that situation so that trade becomes more balanced, more reciprocal and fairer, with the opportunity to have American workers be treated fairly,” US Secretary of State Mike Pompeo said during a recent visit to Beijing. Meanwhile, State Councillor Wang Yi said that the US had two choices on trade. “The first choice is cooperation and mutual benefit. The other choice is confrontation and mutual loss. China chooses the first. We hope the U.S. side can also make the same wise choice. Of course, we have also made preparations to respond to the second kind of choice,” he said.

Experts have noted that Chinese retaliation will most likely target US agriculture and other sensitive areas. “China’s response… which its government had already telegraphed, will be a proportionate set of surgical tariff strikes aimed at inflicting a combination of economic and political damage on the US,” said Eswar Prasad, former head of the IMF's China Division.  “It will be challenging for both sides to find a way to de-escalate these tensions while saving face,  before trade and investment flow between the two countries take a sizeable hit.”

IMF Managing Director Christine Lagarde warned that a trade war could have a "serious" impact and lead to "losers on both sides". "These measures… are likely to move the globe further away from an open, fair and rules-based trade system, with adverse effects for both the US economy and for trading partners," the IMF said.

Washington has also imposed a steel and aluminium import tariff of up to 25% on close US allies including Canada, Mexico, and EU. After a chaotic G7 summit last week, President Trump withdrew the US from the joint communique, and insulted his host Canadian PM Justin Trudeau. Mexico has already responded with tariffs of its own, and Canada and EU nations have promised to retaliate beginning July.

Our assessment is that this measure could indicate that President Trump no longer believes that he requires Chinese assistance on North Korea. As stated previously, we believe that a trade war would harm not only the US and China, but the entire global economy. US allies have responded to Washington’s steel tariffs by announcing their own measures. We feel that it may not be possible for President Trump to fight a trade war on so many different fronts.