US President Donald Trump is currently in Vietnam has addressed the deleagates at the Asia-Pacific Economic Cooperation (APEC). The President is currently on a five nation..

US President Donald Trump is currently in Vietnam has addressed the deleagates at the Asia-Pacific Economic Cooperation (APEC). The President is currently on a five nation tour in Asia.

The US President struck a defiantly nationalist tone that focused on his “America first” rhetoric.

Asia-Pacific Economic Cooperation (APEC) is a forum comprising of 21 Pacific Rim member economies.  The goal of the APEC is to promote free trade through the Asia-Pacific region. It was established in 1989 in part due to fears that Japan would dominate the economic activity of the Asia Pacific region. The scope was to establish new markets for agricultural products and raw materials beyond Europe. Its 21 member economies are home to around 2.8 billion people and represent approximately 59 per cent of world GDP and 49 per cent of world trade in 2015.

Every year the APEC Economic Leaders' Meeting is attended by the heads of government of all APEC members except Republic of China (Taiwan) (which is represented by a ministerial-level official under the name Chinese Taipei as economic leader).  APEC has three official observers: the Association of Southeast Asian Nations Secretariat, the Pacific Economic Cooperation Council and the Pacific Islands Forum Secretariat. APEC's Host Economy of the Year is considered to be invited in the first place for geographical representation to attend G20 meetings following G20 guidelines. 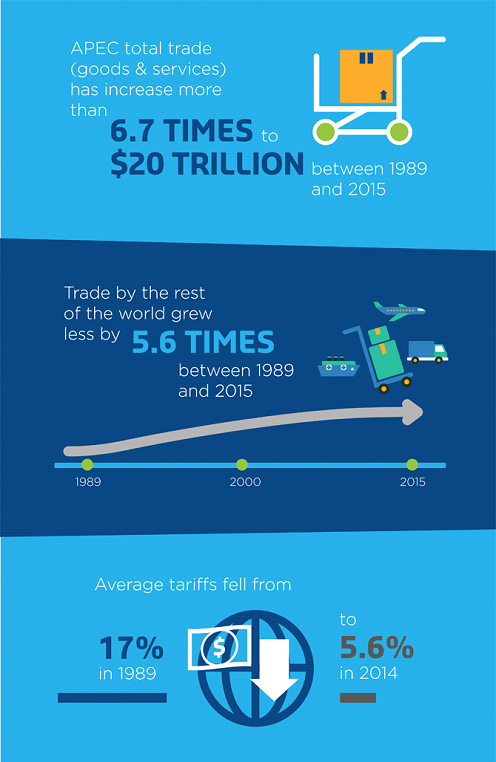 This year the Asia-Pacific Economic Co-operation (Apec) summit is being held in Vietnam. US President Trump is currently on an extended official visit to Asia where he is visiting countries like Japan, South Korea and China. It has been announced that he will be addressing the meeting while also attending it. In the past the US President has spoken against free trade and pulled the US from the Trans Pacific Partnership that was brokered by former President Barack Obama. Trump has spoken more favorably of bilateral trade ties and has urged nations like China and India to engage in more reciprocal trade with America.

Ahead of his prepared remarks for APEC, Trump spoke about trade in Vietnam stating, “When the United States enters into a trading relationship with other countries or other peoples, we will from now on expect that our partners will faithfully follow the rules. We expect that markets will be open to an equal degree on both sides and that private investment, not government planners, will direct investment.”

He has repeatedly spoken about trade in his trip to Asia. In China he said, “We want a vibrant trade relationship with China. We also want a fair and reciprocal one. Today, I discussed with President Xi the chronic imbalance in our relationship as it pertains to trade and the concrete steps it will take to solve the problem of massive trade distortion."

During his address, Trump brought his hard-line economic nationalism. He said he wouldn’t let nations take “advantage” of the US. "We are not going to let the United States be taken advantage of anymore," Trump said in a speech at the start of the Asia-Pacific Economic Cooperation summit. "I am always going to put America first, the same way I expect all of you in this room to put your countries first." Trump also laid out the United States' new approach to trade, telling the audience that he would no longer pursue multi-national trade agreements "that tie our hands, surrender our sovereignty and make meaningful enforcement practically impossible."

Trade and climate change seem to be the main theme of APEC. As one of the first leaders to make a speech on Friday, New Zealand Prime Minister Jacinda Ardern said climate change was "the biggest challenge of our generation". Ardern said, “It is also the greatest challenge facing the Asia Pacific region. We have the largest number of climate vulnerable people in the world. We are already seeing the terrible effects of climate change in our region. It is literally lapping at our feet.”

Our assessment is that Trump’s remarks are in line with his previous criticisms regarding trade. 12 of the APEC members are also signatories to the Trans Pacific Partnership. Without mentioning TPP, Trump said that America will be willing to engage in “bilateral trade agreements with any Indo-Pacific nation that wants to be our partner and that will abide by the principles of fair and reciprocal trade.”