US President Donald Trump says he is ready to intensify his trade war with China by slapping tariffs on all $500bn of imports from the country.

Trump’s protectionist trade policies seem to overlook the economic history of the country. The US Smoot-Hawley tariffs enacted in 1930 are thought to have inspired a trade war, leading to a massive decline in global trade. World trade fell by 66% from 1929 to 1934, while US exports and imports to and from Europe each also fell by about two-thirds.

Trump has raised concerns about a full-blown trade war by targeting Chinese imports. After months of rhetorical exchanges between Washington and Beijing, the imposition of the new import taxes makes real a conflict that has rattled markets, scrambled corporate supply networks and chilled business investment.

Last month, the White House announced plans to stick 25% tariffs on 1100 Chinese goods. China is not happy about this, and Beijing has vowed to retaliate with the same value: 25% tariffs on US products worth $34 billion per year. Each side has threatened further tariffs on the other and tensions continue to escalate, sparking fears of an all-out ongoing global trade war 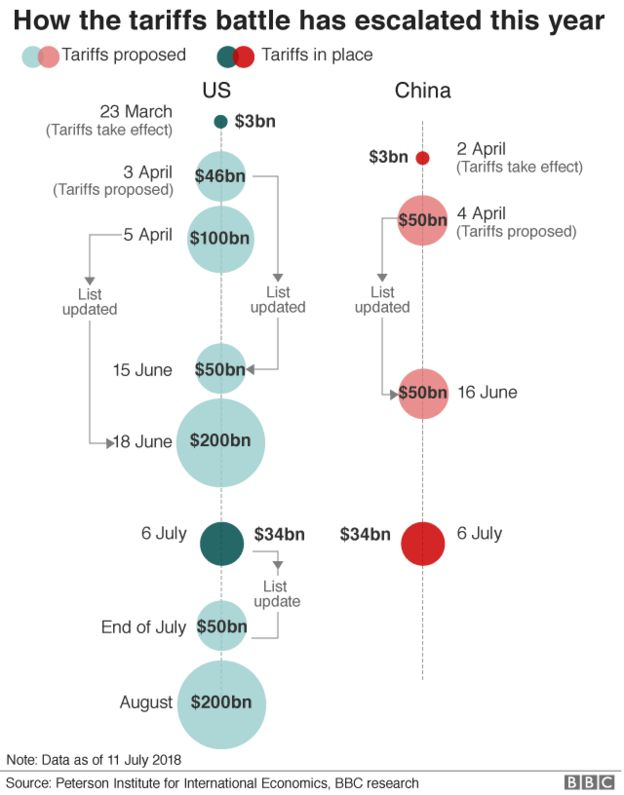 President Trump in a recent interview said, "I'm ready to go to 500.” His comments come before the most recent round of tariffs has had time to take effect. Imposing tariffs on all $500bn worth of Chinese imports will aggravate the trade war beyond control.

President Trump tweeted yesterday,“The United States should not be penalized because we are doing so well. Tightening now hurts all that we have done. The U.S. should be allowed to recapture what was lost due to illegal currency manipulation and BAD Trade Deals. Debt coming due & we are raising rates - Really?” He blamed the EU and China for currency “manipulation” and criticised the US Federal Reserve for raising interest rates.

Mr.Trump has time and again reiterated his view that China’s trade surplus with the US amounts to unfair trade practices. He also believes that imposing tariffs on China is in the best interest of the country. However, many companies in the US are opposed to this move as they feel that it will risk hurting business and the economy without being likely to change behaviour.

When asked if the move might cause a stock market sell-off, he responded: "Well, if it does, it does. Look, I'm not doing this for politics. I'm doing this to do this right thing for our country." However, European stock markets fell after the interview was broadcast, with the FTSE 100 down 0.4% in afternoon trade.

If this move were to manifest, due to Chinese trade surplus with the US it has limited room to retaliate through trade.However, there are multiple channels of countermeasures that China could unlock. For instance, China could take action against US companies doing business in China by imposing regulatory red-tape or slow down custom clearance for their imports.

Although the US has a big trade deficit with China, the US sells more services to China than it buys from them. Its services trade surplus with China hit $38bn in 2016. China could restrict tourism to the US as close to 130 million people tourists from China travel out to destinations in the US and spend around $260 bn a year.

Devaluing the Chinese yuan would help exports by making Chinese goods cheaper for other countries to import and could offset the price rise caused by the US tariffs. However, the fact that Chinese central banks have not supported the yuan lately shows that the government is trying to show their European counterparts among other things, their commitment to liberalization.

China owns more than $1tn of US government bonds, which gives China influence over the US economy. However, it seems unlikely that China will sell US bonds in bulk as it would reduce the value of a major asset that it holds. But perhaps China could work towards establishing links of trade and investment with other countries and invest in tools that will keep its economy growing during tougher times.

Our assessment is that Trump’s rhetoric to escalate the trade war with tariffs on $500 bn worth of Chinese imports comes from his resentment about the Chinese trade surplus. We feel that even though in sheer dollar volume China won’t be able to come close to the US in a tit-for-tat battle there are multiple other subtle measures it could take.