The TPP is now a reality

The Trans-Pacific Partnership has officially been signed by 11 Asia-Pacific countries. The sweeping trade deal has been renamed Comprehensive and Progressive..

The TPP was originally a free trade agreement between countries bordering the Pacific Ocean. Along with the US, a total of 12 nations signed the deal in 2016 to deepen their economic ties by reducing tariffs and to foster trade to boost economic growth. The signatories were: Australia, Brunei, Canada, Chile, Japan, Malaysia, Mexico, New Zealand, Peru, Singapore, the United States (until 23 January 2017) and Vietnam. At the time, it was the largest trade agreement in history and the 12 nations comprised of 40% of world trade.

All 12 countries signed on the dotted line after seven years of negotiations. The former US President Barack Obama spearheaded the effort for five years before the deal came into effect. The vision was that the TPP would be similar to the European Union where a single market would eventually emerge. However, it wasn’t without its critics in the United States.

Former Presidential candidate Bernie Sanders was against it, noting that it “threatened” the US democracy. There were fears that it would result in loss of jobs in the US. The current President Donald Trump also opposed it deeming it to be a terrible deal. Hence, it wasn’t much of a surprise when he, on January 23, 2017, signed an executive order formally withdrawing the US from the TPP.

The US was the lynchpin that had held the agreement together. It accounted for 60% of the TPP's combined GDP. As it currently stands, the TPP must beatified by six countries that account for 85% of the group's economic output. Thus, with the US backing out of the deal, some experts believed that the deal will go defunct.

However, Japan, the next largest economy in the group, has since taken up a leadership position. Chief negotiators from the remaining 11 countries have met in 2017 to determine terms. They also decided on creating a new name for the group. It is now called the Comprehensive and Progressive Agreement for Trans-Pacific Partnership (CPTPP), also known as TPP11. 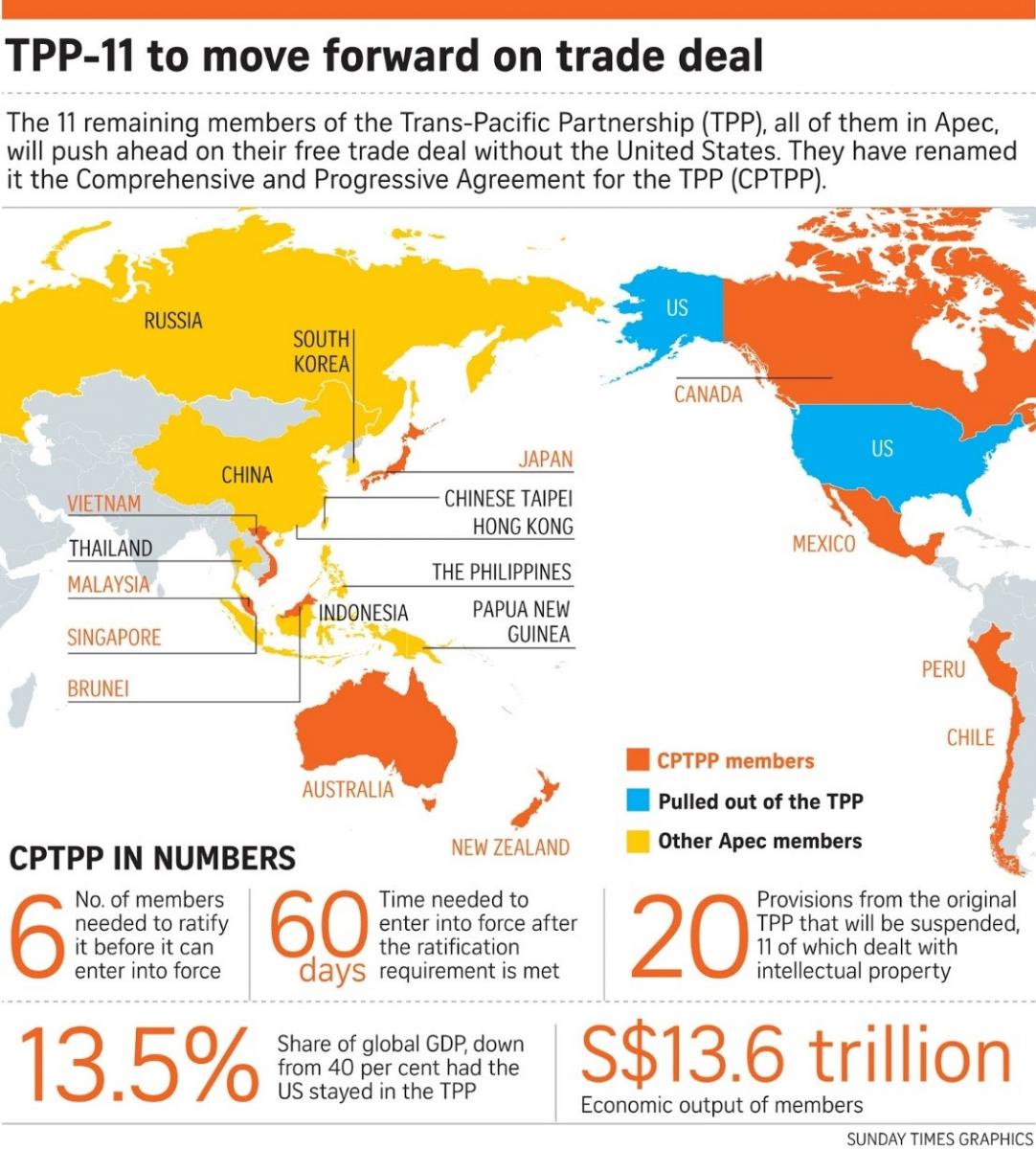 The CPTPP incorporates most of the Trans-Pacific Partnership (TPP) provisions by reference. However, the new pact also suspended 22 provisions that the United States favoured, which other countries had opposed, and lowered the threshold for enactment so the participation of the U.S. is not required. In March 2018, the remaining 11 nations officially signed the trade pact, now colloquially known as the TPP11.

"The CPTPP will establish a new standard for other regional economic integration agreements, and even for future negotiations in the WTO (World Trade Organisation) and in APEC (Asia-Pacific Economic Cooperation)," said Chile's foreign ministry. From 40% of global GDP, the latest trade deal covers about 14 %, and involves the livelihoods of 500 million people.

"We're very proud to show the world that progressive trade is the way forward," said Canadian Trade Minister Francois-Philippe Champagne as officials gathered for the signing ceremony.  “By being relentless and determined in our advocacy for Australia and Australian jobs we secured that trade deal. The world will be drinking more Australian wine, eating more Australian beef and using more Australian services thanks to the TPP-11,” said Australian Prime Minister Turnbull in Sydney.  He noted that it was a “good day” for trade deals.

The deal was announced just hours after US President Donald Trump finalized the tariffs on steel and aluminium imports. This is a move that has been intensely criticized and other nations and the International Monetary Fund have noted that this could start a global trade war.

Our assessment is that after years of negotiations and despite obstacles, the TPP has finally been formalized. It will provide $13.7bn economic access to nations who are part of the deal. By withdrawing from the TPP, the US is likely to forfeit its geopolitical influence in the region. The increasingly protectionist outlook projected by the US is likely to hurt it in the near future.