French multinational oil and gas company Total has announced that it will not continue operations in Iran if it is not granted a waiver from US sanctions. Total is currently part of a multi-billion..

French multinational oil and gas company Total has announced that it will not continue operations in Iran if it is not granted a waiver from US sanctions. Total is currently part of a multi-billion dollar joint venture with the National Iranian Oil Company to develop the South Pars gas field.

US President Trump’s decision to re-impose sanctions on Tehran could impact a number of other European countries.

The Iran nuclear deal, also known as the JCPOA (Joint Comprehensive Plan of Action) was signed by Iran and major powers UK, China, France, Germany, Russia, and the US (the P5+1) in 2015. The deal was a result of almost a decade of sanctions due to Iran’s non-compliance with the Nuclear Non-Proliferation Treaty. Between 2006 and 2015, Iran lost an estimated $100 billion in oil revenue alone. According to the JCPOA, Iran would limit its nuclear ambitions in return for relief from a number of sanctions. It was declared that Iran had complied with the terms of the provisional agreement and sanctions were lifted in 2016. Read more on the nuclear deal here.

World crises and unrest, especially when it takes place in oil producing nations immediately causes oil prices to shoot up. This happened in 2012, after inspectors found proof that Iran was closer to building nuclear weapons capabilities. As a result, oil prices bounced around $95 to $100 a barrel from November through January. In mid-February, prices of oil broke above $100 a barrel.

In April 2018, oil prices climbed past $75 for the first time since 2014. This was largely due to the kind of geopolitical risks that would be triggered if the Iran nuclear deal collapsed. Analysts have previously stated that Iran’s oil exports could drop by as much as 500,000 barrels a day in 2018 and 700,000 barrels a day in 2019 if the U.S. revives sanctions on the region. Read more here.

Total is a multinational oil and gas company based in Courbevoie, France. Total has operations in over 130 countries and is the fourth largest oil and gas company in the world. It was founded in 1924 as the Compagnie Française des Pétroles (CFP) by Ernest Mercier. Its businesses span the entire oil and gas supply chain, including exploration, production, transportation, refinery, and petroleum product marketing. It also deals in renewable energy.

Total began its operations in Iran in 1954. It returned to the country once sanctions were suspended in January 2016. In 2017, Total signed a contract with the National Iranian Oil Company to develop phase 11 of the South Pars gas field (SP11). SP11 is a gas development project dedicated to the supply of domestic gas to the domestic Iranian market. 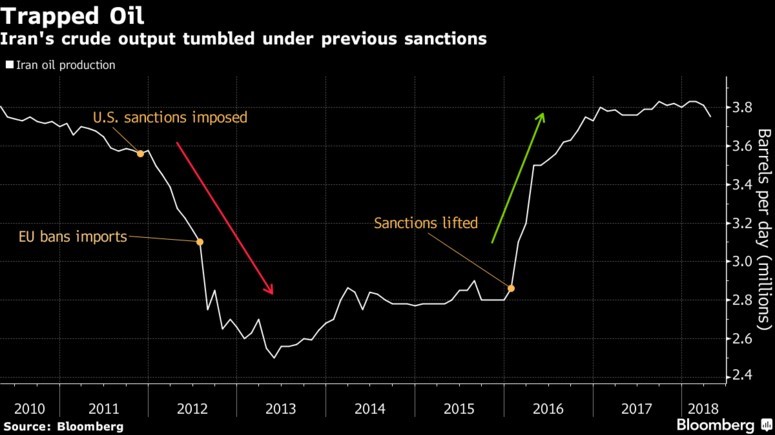 On May 8th, 2018, President Trump announced that the US would be withdrawing from the “decaying and rotten” nuclear deal. Iran has warned that it would not “remain in a deal that has no benefit” and threatened to resume its uranium enrichment projects.

Total has announced that it will not continue its operations in Iran if it is not granted a waiver from US sanctions. “Total has always been clear that it cannot afford to be exposed to any secondary sanction, which might include the loss of financing in dollars by US banks for its worldwide operations… the loss of its US shareholders… or the inability to continue its US operations,” the company said. Total noted that it has invested less than $50 million in the project so far.

Experts have raised concerns about the impact of the sanctions on oil prices. Iran’s oil minister has said that he believes that the United States is trying to keep oil prices high in order to support US shale oil. The International Energy Agency has warned that geopolitical uncertainty in Iran and Venezuela have the potential to impact oil prices. “Only Saudi Arabia, the United Arab Emirates, Kuwait and Russia are likely to be capable of a quick ramp up of substantial volumes," to compensate for a fall in production in Venezuela and Iran, the IEA said.

Indian oil minister Dharmendra Pradhan admitted that he was "a little bit concerned" about the impact of an oil price rise. "This kind of geopolitical (tension) affects both consuming and producing countries." Pradhan said. However, he said it is still too early to predict the effect on India.

The other signatories of the JCPOA have indicated that they will continue to abide by the JCPOA. EU foreign policy Chief Federica Mogherini said that it is working on finding a “practical solution” to keep the deal alive. Technical experts have reportedly been asked to explore means to maintain oil supply and protect European companies doing business in Iran. According to some reports, one strategy could be to switch payments to the euro for oil purchases. Others believe that the EU could cite the “blocking statute” it previously used to lift sanctions on Cuba in 1996.

Observers have noted that China would be a primary beneficiary from US withdrawal from the JCPOA as it could allow China to demand oil imports priced in yuan. "There has been speculation that restrictions on Iranian oil sales and the lack of access to dollar financing will boost demand for yuan-denominated Shanghai futures," said BMI Research. “With China deepening its energy ties with Iran and given Beijing's desire both to support the contact and — relatedly — to further internationalize the use of its currency, payment in yuan and benchmarking against Shanghai futures would seem logical."  Read more on the Petro-Yuan here.

Some believe that China’s state controlled national petroleum corporation (CNPC) could replace Total if it withdraws from Iran. CNPC already has a 30% stake in the project and could acquire Total’s stake as well. According to reports by Reuters, senior officials from the NIOC have met with Chinese buyers including Sinopec and Zhuhai Zhenrong, to seek assurance of continued oil imports.

Our assessment is that Total’s statement is significant as it has one of the largest stakes in Iran. We believe that China could be a major beneficiary of Washington’s withdrawal from the JCPOA. Beijing could use this as an opportunity to strengthen the petro-yuan. However, changes in supply in Iran could lead to supply shortages across the world. The re-imposition of sanctions has increased the risk of conflict in the Middle East. As the second largest importer of oil from Iran, this could adversely affect India. As stated previously, India will spend approximately $1.3 billion more every year for a one dollar per barrel increase in crude prices.