While Britain celebrated the Queen’s 70th Jubilee as the reigning monarch, there were speculations that Boris Johnson may not celebrate his third jubilee. He may have won a no-confidence vote, but his political career stands marred by a series of political scandals from ‘partygate’ to off-handed gaffes.

Like most parliamentary democracies, the UK has a long history of pitching its elected leaders into a political minefield forcing them confront a no confidence vote. The British system allows such a vote to be initiated by the Government, the Opposition or due to any compelling circumstances warranting such a motion. Since 1945, 26 motions of no confidence have been introduced in Parliament, of which four were against prominent Tory Leaders in the last 30 years alone- Theresa May, Iain Duncan, John Major, and Margaret Thatcher. The motion against May was due to her support for Brexit and was filed by the Opposition. Like Johnson, she won the vote. However, due to three Brexit related proposals being rejected by Parliament, she resigned.

Johnson rode in on the “getting Brexit done” wave with a sweeping majority vote. However, a chain of events, from the ‘party gate’ investigations and subsequent police censure to his failure to stem the economic bleeding from Brexit, brought the current Prime Minister face to face with a no confidence motion. To add insult to injury, it was Johnson’s own government that set the ball rolling by approaching the 1922 committee. 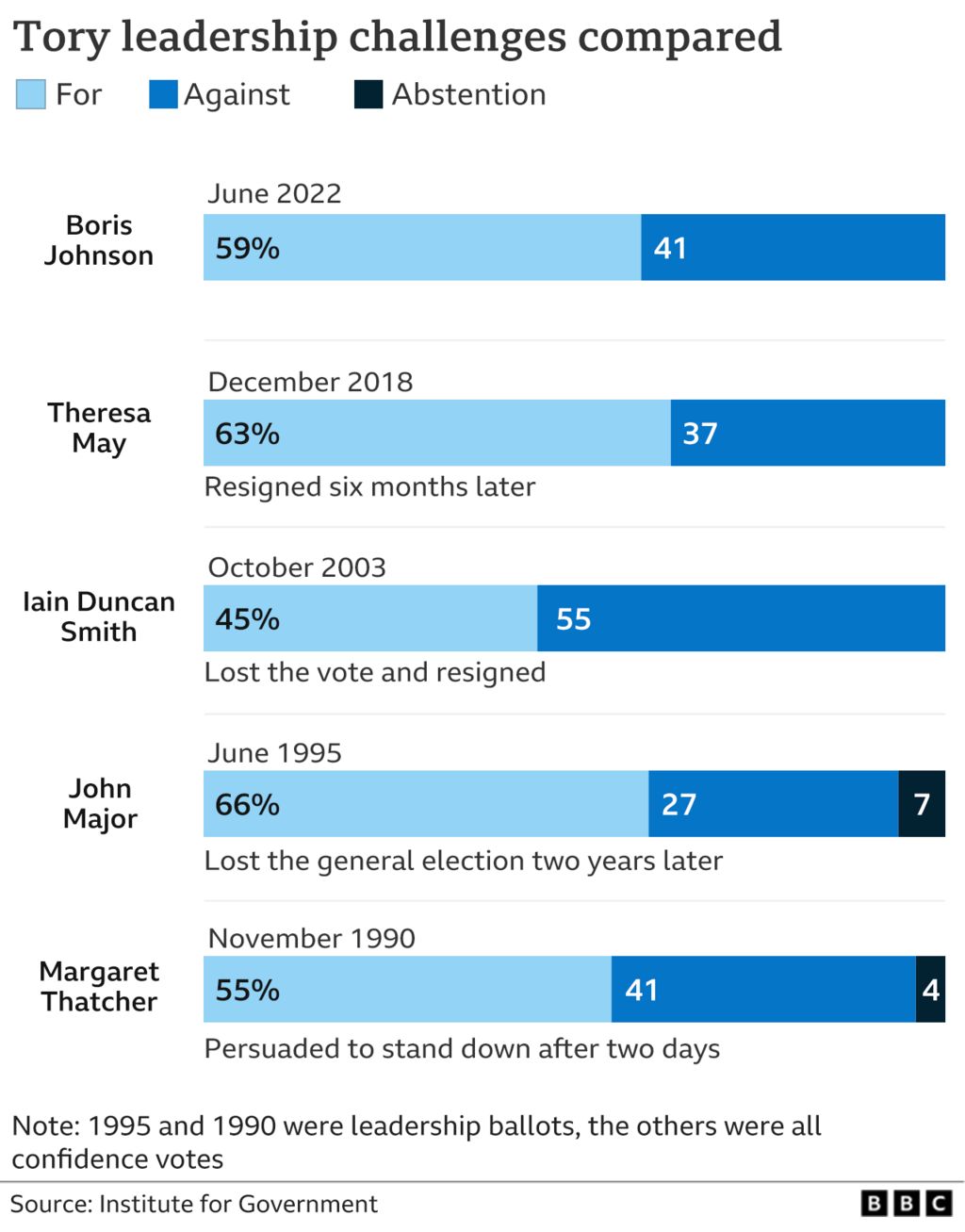 Conscious of the immense damage done to the party’s image after investigations proved the Prime Ministers culpability in the illegal parties held in 10 Downing Street, there was a significant segment in the Conservative party that demanded that Mr Johnson alone pay the price for his indiscretions. With an astonishing 41 per cent of his own MPs voting against him, it is clear that Mr Johnson was teetering on the edge. Since the voting was by secret ballot, the names of the dissenters are not known although a few did not hesitate to air their views in public. Overall, the significant dissatisfaction with Johnson’s leadership is incontrovertible.

With a tumultuous journalistic and political career behind him, Mr Johnson has a flair for defying political gravity. His controversial remarks and antics aimed at creating controversaries such as getting stuck on a zip line while promoting the Olympics or bike riding with Arnold Schwarzenegger, have been lapped up by the tabloid press. Yet, he manages to come off as relatable and affable to the common man on the street. His 2019 publicity stunt wherein the famous London red bus displayed the message of sending £350 million to the NHS instead of the EU became synonymous with his pro-public stance. His detractors accused him of attempting to alter google searches for “Boris red bus” when he shared his hobby of making and painting buses out of wine boxes- a hobby that was as bizarre as it was mesmerising.

Having survived the scare of the no confidence vote, a chastened Boris Johnson has urged his party to unite behind him to tackle the real crucial issues facing the UK. However, with a divided party, unhappy citizens, and the impending outcome of the partygate investigations by the Privileges Committee, it appears that the PM Boris Johnson, despite all his charm is skating on razor thin ice.

Even after the narrow win, there are other means by which the “rebel Tory MPs” can oust the incumbent PM. The Cabinet could apply pressure on the premier to resign, the likelihood is uncertain since prominent members like Liz Truss (Foreign Secretary) and Rishi Sunak (Chancellor of the Exchequer) publicly backed the PM during the no confidence motion. Then there is the issue of a successor who can hold the party together during these tumultuous times. Given the pronounced discontentment among certain Tories, in a year’s time, another leadership contest could be proposed unless the one-year safety from challenge rule is amended.

A possible final nail in the PM’s career could be the outcome of the Privileges Committee investigation. Should the committee find that the PM was in contempt of Parliament by misleading it about partygate, the committee could recommend sanctions to the House of Commons such as a suspension of the PM from the Commons for a certain duration. Such a decision could be difficult to shrug off by even Mr Johnson!