Through the Prism of Indian Experiences

Synergia Research Team This is article is based on the 107th Synergia Forum titled ‘Afghanistan: What Next’. It featured Mr. Krishnan Srinivasan, the former foreign secretary of India, as a keynote speaker.

In 2001, the U.S. led invasion of Afghanistan had come as a geopolitical boon for India, as it disrupted the safe sanctuaries available to various anti-India groups. New Delhi had felt comfortable with the American and NATO presence in Afghanistan for 20 years, during which it benefited from the uneasy peace. In fact, it had made good use of the relatively stable environment provided by the Western forces to engage in several high profile and meaningful development projects at considerable cost. The sudden collapse of the Ghani regime, therefore, came as a surprise, and now the ground has moved under its feet.

It is estimated that India has invested about $3 billion on 150 civil infrastructure projects in Afghanistan over the past twenty years. These have undoubtedly been to the benefit of the Afghan people, and these projects are now at risk of being destroyed or misused or put to purposes for which they were not intended.

Stability and peace are not going to return to Afghanistan any time soon, and the situation remains extremely fluid. The Indian government must be prepared to react almost on a day-to-day basis with the evolving situation. As articulated by Shakespeare, “There is a tide in the affairs of men. Which, taken at the flood, leads on to fortune.”

The Taliban leadership has been touring world capitals such as Doha, Moscow, Istanbul, Tehran, Beijing and Islamabad over the last couple of years. They have been effectively based in Pakistan, which was instrumental in bringing the Taliban to talks in Doha, to which India was not invited to be a participant.

On its part, India has also never invited the Taliban to New Delhi, while they have been guests at various other regional capitals. Now, with effect from August 16th, the Indian Embassy has been withdrawn from its privileged location in Kabul, within hours of the Taliban take over and the flight of the former President Ashraf Ghani. In contrast, all the other regional players and Russia are in Kabul and have had discussions with the Taliban. With no diplomatic presence in Kabul, India is the odd man out. This places the country at a serious disadvantage.

Apparently, the government has prioritised personnel security over strategic and locational advantage. Given that the country has got embassies in several dangerous places on earth, the underlying logic of this decision may be revisited in the years to come. It must be remembered that Kabul was one of the best-protected embassies of the country in recent years.

As far as Washington is concerned, it has been able to preserve a close understanding with the Taliban on certain issues, despite the ignominy and chaos that accompanied its departure. For example, it has publicly praised the Taliban for its cooperation during the evacuation process.

China, like other regional players, has also been quick to establish contact with the Taliban in Kabul. Despite the initial friendly overtures, however, the country will have one common consideration like Iran, Russia and India i.e. the export of terrorism. As a result, it will be extremely vigilant on this front.

It is amply clear that, as of today, Pakistan has emerged as the most influential country in Afghanistan. In fact, the visit of the head of ISI to Kabul on the eve of announcing the new governing leadership had created immense media speculations in India and abroad. Also, the active role of the Pakistani military in the final battle in the Panjshir Valley remains shrouded in a cloak of secrecy. However, India should not assume that Pakistan’s influence will last forever. If the Taliban regime manages to develop international connections, there is going to be a downside to Pakistan's own privileged influence there. 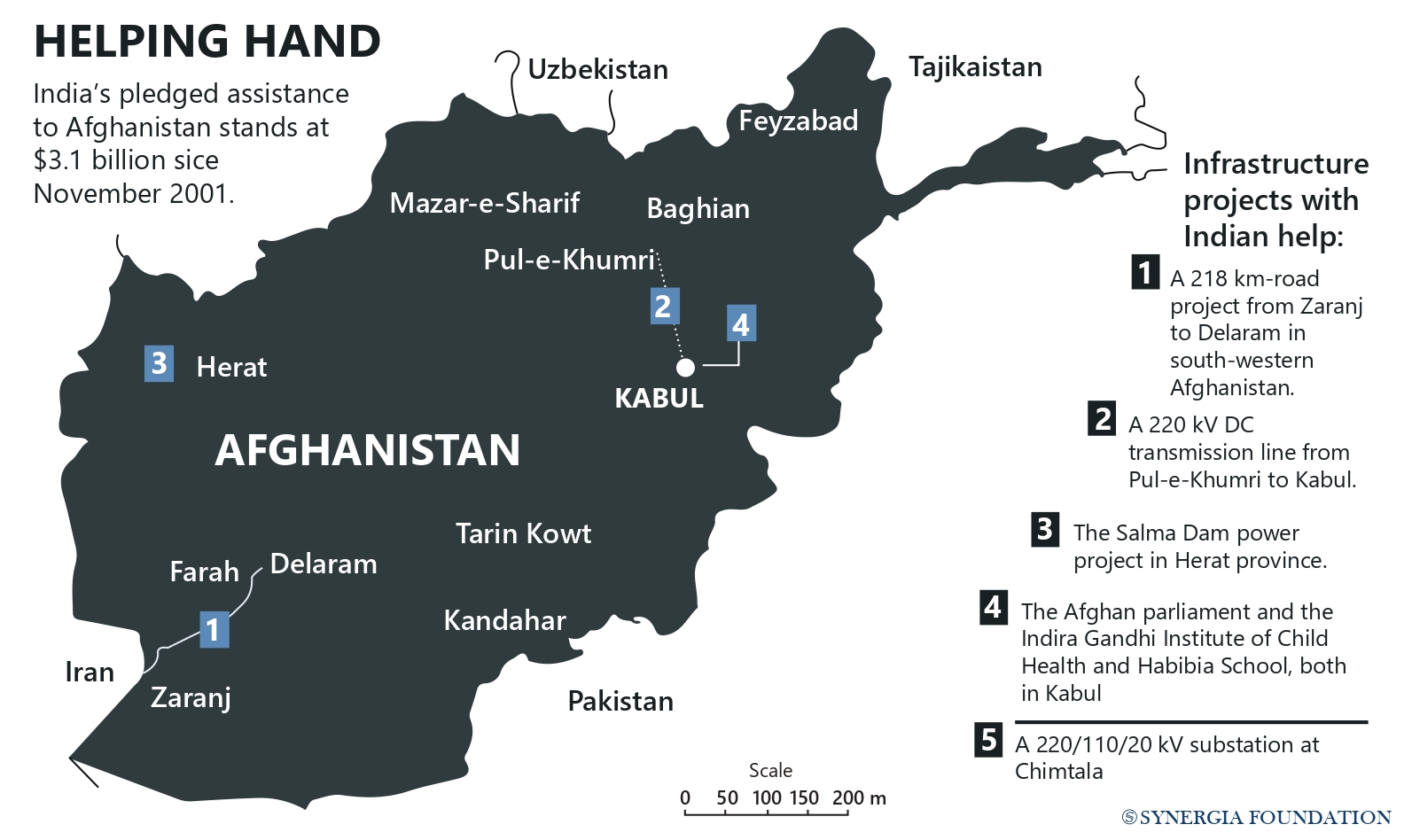 The Americans had anticipated that the Taliban would one day form the government in Afghanistan, at least for the past one year. In fact, the Doha talks were predicated on this assumption. According to Mr. Krishna Srinivasan, the former Foreign Secretary of India, “the Americans wanted out, the Taliban wanted in, and the previous government led by Ashraf Ghani found itself as the man in the middle”. In contrast, it appears that New Delhi remained strangely unprepared for the Taliban takeover.

For India, the most pressing problem is the presence of groups like the Islamic State, the Al-Qaeda, Lashkar-e-Taiba and other militant organisations in Afghanistan. An even bigger worry is that the malignant Haqqani network seems to be an integral part of the Taliban leadership. Based on its past experiences, there is understandably a deep suspicion and prior aversion to the Taliban among official circles in India.

Mr. Srinivasan, the former foreign secretary, recapitulates the Indian experience when the Taliban had first come to power a quarter of a century ago. "The Indian experience was highly negative. The Taliban was considered to be an adjunct of the Pakistan military and the ISI. They were suspected of activities adverse to India, and they were definitely involved in the Pakistan hijacking of an Indian civil aviation aircraft that ended in Kandahar. When Omar Shaikh was released from prison in India, he went on to commit awful crimes. Old memories die very hard, and they influence current thinking.”

However, Taliban is a reality that cannot be ignored. Therefore, India must open channels of negotiations. According to Mr. Srinivasan, “The past is never a good guide to the future. We have to forget what happened from 1996 to 2001 when the Taliban were last in power in Afghanistan. We have got to judge engagement with the Taliban based only on one simple proposition – does it help to advance and safeguard our national interests. We don't need to trust the Taliban. We only have to observe and verify their behaviour.”

REACHING OUT TO TALIBAN

Since the Taliban has been proscribed as a terrorist organisation by the UN, there are questions about whether it be morally correct for India to negotiate with them. The reality, however, is that the ground situation has changed considerably. Even the UN Security Council has refrained from referring to Taliban as a proscribed organisation in its recent statements and resolutions.

Moreover, when it comes to its national interests, India has never hesitated in practising realpolitik; it maintains relations with many countries which have deplorable human rights records. For instance, it has had dialogues with several disagreeable regimes like North Korea or the former government of Pol Pot in Cambodia.

The question of morality, therefore, need not come into the picture. Indian diplomats need to remain pragmatic and get back to bilateral business as quickly as possible, and that means that the Indian flag must fly in Afghanistan. The country must re-establish its diplomatic mission in Kabul at the earliest, leveraging its position as the strongest and richest SAARC member with the most credible institutions. After all, Afghanistan is in its immediate region, and continues to be a member of SAARC. Even if the regional grouping has been on the decline in recent years, it remains relevant.

Apparently, there have already been some discussions with the Taliban in Doha to this effect. This was not surprising because many statements had emanated from the Taliban spokesperson, which indicated that the group would like to open relations with India. However, any such discussion should directly focus on Indian interests and expectations. For its part, New Delhi needs to exercise strategic patience with respect to Afghanistan. While not abandoning the Afghan people, it must remain realistic with regard to the security threats posed to it.

Mr. Krishnan Srinivasan, Former Foreign Secretary of India, 107th Synergia Forum: ‘Afghanistan: What Next’ “We have had dialogues with several disagreeable regimes like North Korea or the former regime of Pol Pot in Cambodia. The question of morality does not need to come into the picture. In my view, we need to get back to bilateral business as quickly as possible and that means our flag must fly in Afghanistan.”

Mr. Y.K Sinha, Chief Information Commissioner of India and former High Commissioner to the United Kingdom, 107th Synergia Forum: ‘Afghanistan: What Next’ “By withdrawing our ambassador temporarily, I do not think we are abandoning or writing off Afghanistan. I am sure that discrete and not-so-discrete contacts with the Taliban are already happening. I think we need to demonstrate strategic patience and be very conscious of the security threat posed to us. It is much better to wait and watch how things are developing.”