As military conflict broke out between Iraqi and Kurdish troops in the city of Kirkuk, the United States has called for "calm". Iraq and the autonomous..

As military conflict broke out between Iraqi and Kurdish troops in the city of Kirkuk, the United States has called for "calm".

Iraq and the autonomous region of Kurdistan are both key allies for the US in its war against terror.

The Kurds are a Northwestern Iranic ethnic group in the Middle East. They have historically inhabited the mountainous areas to the South of Lake Van and Lake Urmia, a geographical area collectively referred to as Kurdistan. Most Kurds speak Northern Kurdish (Kurmanji) or Sorani, which both belong to the Kurdish languages. Over the millennia, numerous ethnicities have migrated, settled or natively inhabited the Kurdish region including Turks, Persians, Arabs, Kurds, Armenians, Assyrians, Chechens, Azeris and others. As one of the crossroads of the Middle East, Kurdistan has been home to both ethnic battlegrounds, as well as peaceful ethnic coexistence.

Historically, the Kurdish region has seen a long list of invaders and conquerors. This includes ancient Persians from the east, Alexander the Great from the West. In the 7th Century Muslim Arabs invaded the region. In the 11th Century it was Seljuk Turks and it was the Ottoman Turks in the 16th Century. Most recently, in 2003, the United States invaded Iraq.

In accordance to the Iraqi constitution of 2005, the region of Kurdistan is an autonomous area. It is governed by the regional Kurdish government. Much of the population in the region is comprised of the Kurdish minority, which comes to around 6 million people. In 2014, Kurdistan proposed to hold a referendum of independence; however, the plans fell through at that point of time.

Kirkuk is a city in the north of Iraq that is situated between Mosul and Baghdad. The city is extremely oil rich and can be tapped for about a half million barrels per day. In 2014, Iraqi troops were chased away by ISIS forces from Kirkuk. At the time, it was the Kurdish troops who came in and defeated ISIS. Kurdistan has since retained its control over the city even though it falls 32 kilometres outside the Kurds' autonomous region.

Iraqi and Kurdish troops are two of US’ most important allies in its fight against ISIS. 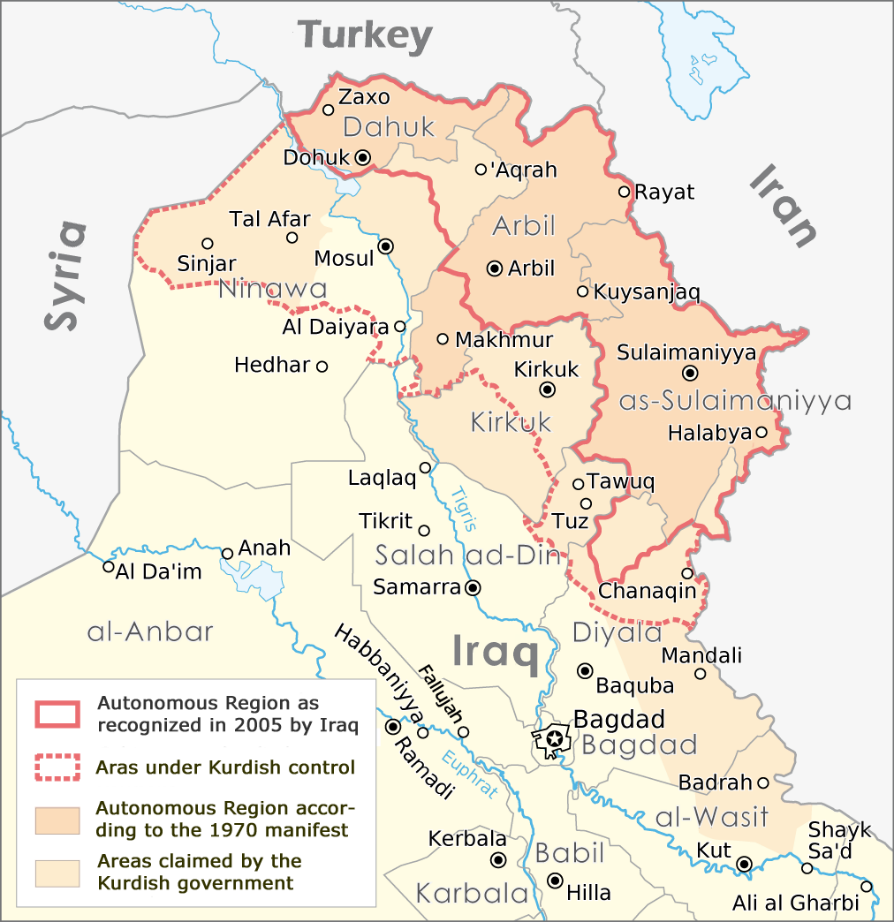 In September 2017, Kurdistan once again held a referendum for independence. The voters overwhelmingly voted in support for secession. The move has been condemned by Iraq, Turkey and the UN. US has also expressed its misgivings. Three weeks after the controversial referendum, Iraqi troops began advancing towards Kirkuk. They were able capture key military positions outside the disputed city. By the end of Monday, Iraqi government forces and allied Shiite militias had taken control of Kirkuk. There have been reports of multiple causalities. The two main allies of the US in its war against terror, have now begun shooting at each other, causing concern in Washington.

Col Robert Manning, a Pentagon spokesman tried to downplay the developing describing the takeover, as “coordinated movements, not attacks”. He said that an exchange of fire that is reported to have resulted in several casualties was “an isolated incident”. We have not seen levels of violence suggested in some of the media reports.” However, he urged the two parties to stand down and focus on the “common threat” that is ISIS. He added, “This is certainly not helpful and again we encourage both sides to not fight each other. Coalition leaders at all levels are engaging with their counterparts in the Iraq security forces to encourage dialogue and de-escalation.”

US President also weighed in on the situation and maintained neutrality stating, “We don’t like the fact that they are clashing, but we’re not taking sides.” However, the US embassy in Baghdad declared its support for Iraq. The embassy said in a statement, “We support the peaceful reassertion of federal authority, consistent with the Iraqi constitution, in all disputed areas.”

Lawmakers in the US have expressed concern over the military equipment being used in the conflict (a lot of which has been provided by the US to help fight ISIS). Senator John McCain said, “I am especially concerned by media reports that Iranian and Iranian-backed forces are part of the assault. The United States provided equipment and training to the government of Iraq to fight Isis and secure itself from external threats – not to attack elements of one of its own regional governments, which is a longstanding and valuable partner of the United States.”

Thousands of residents in the region fled trying to escape the conflict.

Kurdistan may now be unable to strike out with its plans for independence as its economy is heavily dependent on oil. The vote may have alienated the United States and angered neighbors. “They may have made a miscalculation of historic proportions by proceeding with the referendum over the objections of just about everyone who counts,” said Joost Hiltermann, an analyst with the International Crisis Group.

One of the reasons why Iraq was able to capture Kirkuk with ease is because it is a multi-ethic region that’s home to more than just Kurds. Additionally, fighters loyal to a Kurdish opposition party, the Patriotic Union of Kurdistan, agreed to make way for the advancing Iraqi forces.

Col. Ryan Dillon, a spokesman for the coalition in Baghdad, said American forces in the area were watching the situation, but were not involved in the fighting. “We are monitoring the situation closely and strongly urge all sides to avoid additional escalatory actions,” he said. “We opposed violence from any party, and urge against destabilizing actions that distract from the fight against ISIS and further undermine Iraq’s stability.”

In midst of the violence, oil prices closed in on the highest level in six months spurred by the development.

Our assessment is that as we predicted earlier, conflict between the two forces does not bode well for the region. without control over Kirkuk and its considerable resources, Kurdistan will be left with little choice but a forced reconciliation with Iraq. However, if this escalates into an all-out military conflict between Kurdish and Iraqi troops, then it could result in disastrous consequences for the US war against ISIS. US won’t be able to maintain its neutrality for much long and as tensions escalate, the region will become the theatre for yet another war.