Tesla: Going private is the best

Tesla boss Elon Musk is considering taking the electric-car firm private, a move he believed was the "best path forward" for the company. If Tesla were taken private, it would be one of the largest such transactions in history - a deal worth more than $80bn, including the...

Tesla boss Elon Musk is considering taking the electric-car firm private, a move he believed was the "best path forward" for the company.

If Tesla were taken private, it would be one of the largest such transactions in history - a deal worth more than $80bn, including the firm's debt.

Tesla, Inc. founded in 2003, is an American multinational corporation based in Palo Alto, California, that specializes in electric vehicles, lithium-ion battery energy storage and solar panel manufacturing. The company's Model S was the world's best-selling plug-in electric car in 2015 and 2016.

Musk surprised investors on Tuesday with a tweet saying he had already lined up the funding, and told employees that it would relieve the company of the having to manage market expectations on a quarterly basis.

The tweets came after a report in the Financial Times that Saudi Arabia's sovereign wealth fund had taken a 3%-5% stake in Tesla, a holding worth at least $1.9bn.

"The reason for doing this is all about creating the environment for Tesla to operate best," the email reads. "As a public company, we are subject to wild swings in our stock price that can be a major distraction for everyone working at Tesla." He goes on to mention the quarterly earnings cycle and how that puts pressure on the company to focus on moves that would boost quarterly numbers while disregarding longer-term motives and outcomes.

Musk also made mention of the "shorts," investors who bet against Tesla succeeding in order to profit themselves. He claims Tesla is the most shorted stock "in the history of the stock market" and that going private would remove them from the narrative.

He said shareholders would be offered $420 per share - around a fifth higher than the current price.

Musk claimed to have secured funding to buy out shareholders but did not offer any further details. It would cost about $71 billion to take Tesla private at $420 per share. Before Musk's tweet, Tesla had a market value of $58 billion, already higher than that of General Motors or Ford even though those companies are significantly larger and more profitable.

Tesla shares ended the day 11% higher at almost $380 per share - close to their all-time high.

Trading in the shares was initially suspended after Mr Musk's tweets - pending a more formal announcement.

While Twitter was an unconventional way to make the announcement, the US market regulator, the Securities and Exchange Commission (SEC) in a 2013 report, allows firms to use social media outlets like Facebook and Twitter, provided investors have been told which social media outlets will be used.

The SEC issued that report after Reed Hastings, the CEO of Netflix, used a Facebook post to congratulate Netflix's chief content officer on record-breaking viewership. Netflix stock moved higher as a result.

After Musk, who owns 20%, the next largest shareholders in Tesla are the mutual fund giants T. Rowe Price and Fidelity, with stakes of more than 9% and 8%, respectively. Scottish money manager Baillie Gifford is the fourth-largest, with a nearly 8% stake and Chinese tech giant Tencent who owns almost 5% is the fifth.

Musk's missions are big and make it difficult to accommodate investors' quarterly expectations. It's worth noting here, too, that it was just last week that Tesla reported losses, before reassuring investors that the company's "goal is to be profitable and cash-flow positive for every quarter going forward." 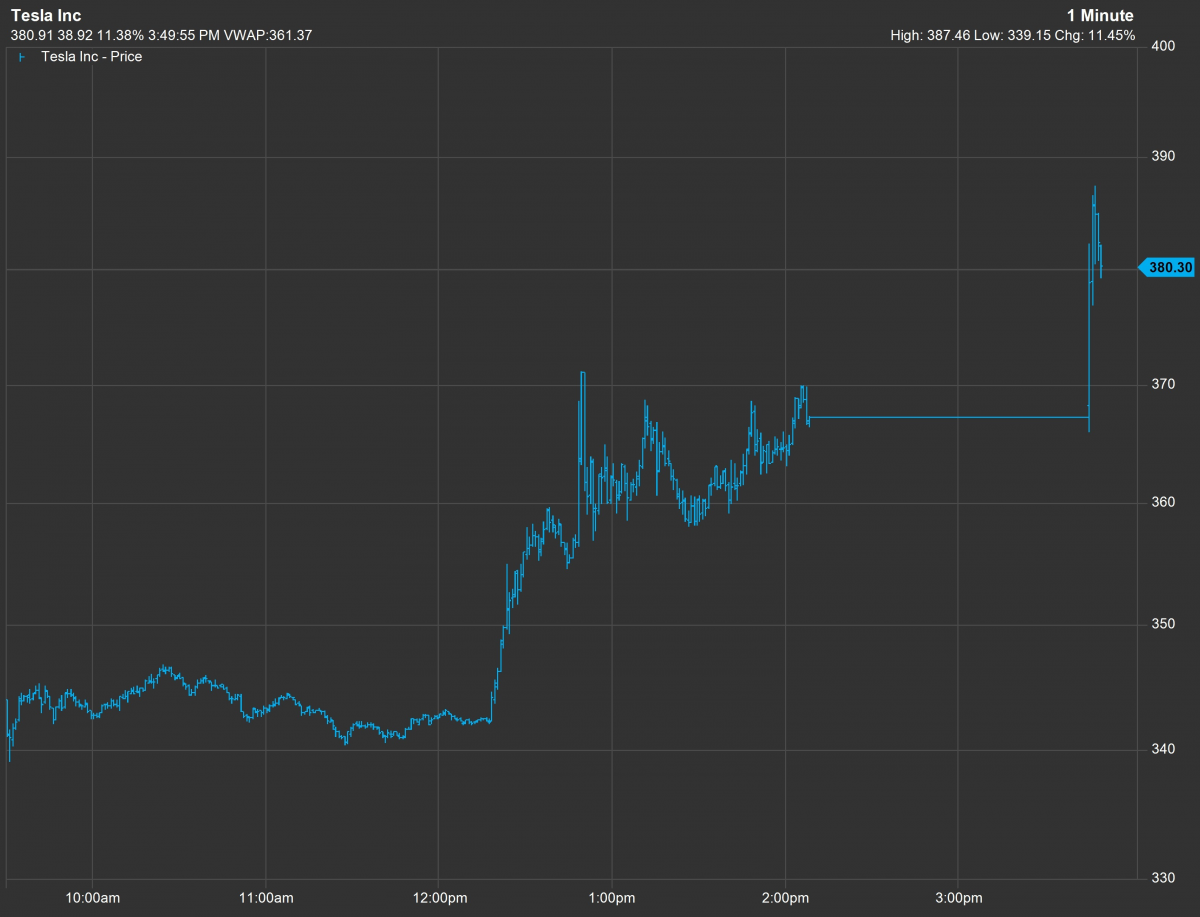 Musk also mentioned, “a final decision has not been made" about the move.

Tesla has burned a considerable amount of cash while struggling to produce the Model 3, its lowest-priced electric cars. This has driven the stock lower and raised concerns about whether Tesla will need to sell more shares to pay for the expansion. Musk has insisted Tesla has no such need.

Our assessment is that an acquisition can create significant financial gain for shareholders and CEOs, while the reduced regulatory and reporting requirements private companies face can free up time and money to focus on long-term goals. We believe that the 16% premium to the current share price may not be sufficient to motivate existing shareholders to support the sale.