At least eight people were killed and 11 injured in New York after the driver of a truck mowed down people on a cycle path in Lower Manhattan. Authorities have billed it a..

At least eight people were killed and 11 injured in New York after the driver of a truck mowed down people on a cycle path in Lower Manhattan.

Authorities have billed it a terror attack. According to media reports, a note pledging allegiance to the Islamic State was found in the truck belonging to the attacking.

New York has been the site for two of the biggest terror attacks in modern history. In 1993, a truck bomb detonated below the North Tower of the World Trade Center in the city. The 1,336 pounds (606 kg) urea nitrate–hydrogen gas enhanced device ended up killing six people and injured over a thousand.

On September 11, 2011, there were a series of four coordinated terrorist attacks that were carried out by terror outfit, al-Qaeda on the United States.  The attacks killed 2,996 people, injured over 6,000 others, and caused at least $10 billion in infrastructure and property damage. A total of four planes were hijacked for the purpose of these attacks. Two of the planes, American Airlines Flight 11 and United Airlines Flight 175, were forcibly crashed into the North and South towers of the World Trade Center complex in New York City. The 9/11 attacks became the catalyst for US’ invasion of Iraq and the current Afghanistan war.

The Islamic State of Iraq and the Levant is a Salafi jihadist militant group that has been designated as a terrorist organization by the UN. It gained global prominence in early 2014 when it drove Iraqi government forces out of key cities in its Western Iraq offensive, followed by its capture of Mosul and the Sinjar massacre.

However, despite the heavy fighting that has taken place for control of these region, ISIS has been losing all the ground it claimed. According to the US Defense Intelligence Agency as of May 2017 ISIS has lost 65 percent of its land in Iraq and 45 percent in Syria since 2014. Economically too the group has suffered greatly wherein its revenue dropped from $1.9b in 2014 to about $870m in 2016. Experts have stated that on the back of the military losses.

For a detailed overview of truck-ramming terror attacks, click here. 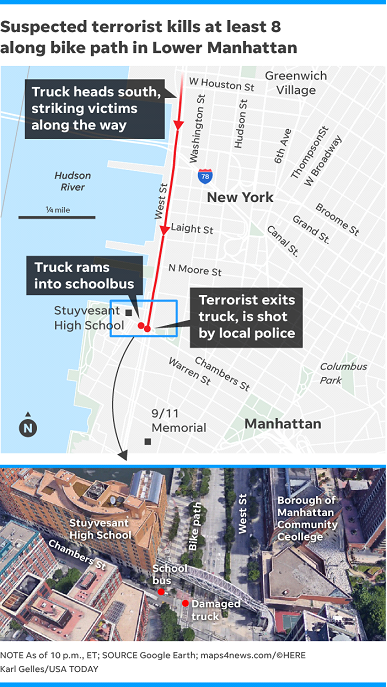 Once again, the World Trade Centre in New York City became the theatre for terrorism in October 31st, 2017. A suspected terrorist in a rented pickup plowed through a busy bicycle path near the World Trade Center memorial. It plowed through cyclists and pedestrians and ended up hitting a school bus. The attack killed eight people and injured at least 11 people. He then emerged from his car screaming in Arabic and shooting with what later appeared to be pellet and imitation guns. He was shot in the abdomen by the police. The attack took place just hours before New York was preparing to host a series of festivities in connection to Halloween.

"There are several fatalities and numerous people injured," police tweeted shortly after the carnage began. "The vehicle continued south, striking another vehicle. The suspect exited the vehicle displaying imitation firearms and was shot by NYPD."

New York’s Mayor, Bill de Blasio said, “This was an act of terror, and a particularly cowardly act of terror aimed at innocent civilians, aimed at people going about their lives who had no idea what was about to hit them. We will respond as we always do, we will be undeterred.”

CNN has reported that authorities found a note in the attacker’s car. The statement, which was written in English, stated that the attack had been committed in the name of ISIS.

Law enforcement officials have identified the driver as Sayfullo Saipov, a 29-year-old man who is originally from Uzbekistan. He is expected to survive his gunshot. An immigrant, he came to the US in 2010. Authorities have stated that investigation is ongoing but it appears to be a lone wolf attack.

US President Donald Trump expressed his condolences through Twitter noting, “President Donald Trump tweeted: "My thoughts, condolences and prayers to the victims and families of the New York City terrorist attack. God and your country are with you!” He added, “We must not allow ISIS [Islamic State] to return, or enter, our country after defeating them in the Middle East and elsewhere. Enough!”

Among the victims of the attack are also foreign nationals. Argentina's Ministry of Foreign Affairs said that Argentine citizens were killed, but did not disclose how many had died. It has been reported that that a total of five Argentinians (all friends) were among those killed. A Belgian national also was a victim of the attack, according to Didier Reynders, Deputy Prime Minister and Foreign Affairs Minister for Belgium.

Our assessment is that it is too early to speculate if this was in fact a lone wolf attack or if it was part of a larger conspiracy and a plot. The reason vehicle ramming attacks have become popular with terrorists is because they are relatively easy to plan and be carried out without any detection.  This attack is likely to result in the White House administration pushing for stricter immigration laws.