There has been an explosion on a Tube train in London underground that resulted in the injuries of 18 people. Scotland Yard has confirmed that the incident is being treated as terrorism.

There has been an explosion on a Tube train in London underground that resulted in the injuries of 18 people.

Scotland Yard has confirmed that the incident is being treated as terrorism.

There have been a number of terrorist attacks in United Kingdom in 2017. On March 22nd 2017, there was an attack in the famed Westminster Bridge that resulted in the deaths of five people and injured 40 others. In May 22nd, a suicide attack took place in Manchester during a concert. This attack killed 23 people and injured over a hundred. Additionally, there were two terrorist incidents in June 2017. On June 3rd 2017, vehicle rammed into pedestrians standing on London Bridge. This was followed by a knife attack. Similarly, on June 19th, 2017, a van was driven into pedestrians standing close to the Finsbury Mosque. Eight people were injured. According to the Global Terrorism Database, 126 people have killed due to terrorism in the UK between 2000 and 2017. 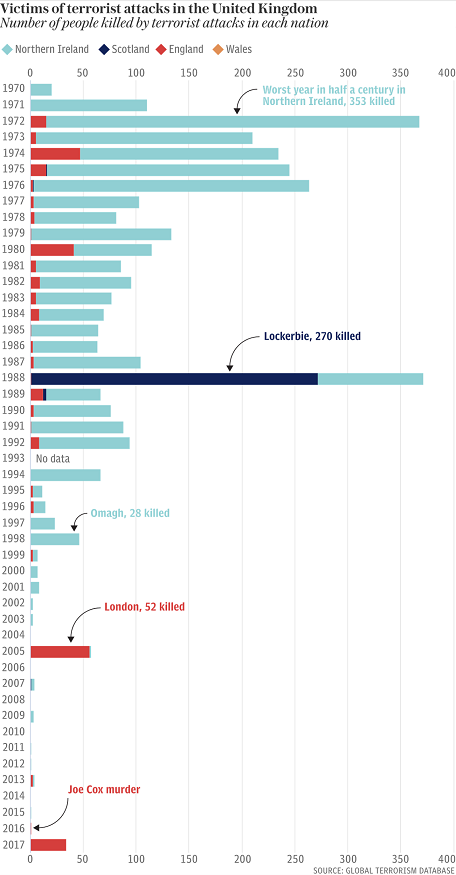 The London tube is an extremely popular mode of transport. According to official figures, $1.37 billion take the underground tube system every year.

At 8.20am local time, there was a blast at Parsons Green station on the District Line. This explosion reportedly resulted in the injuries of 18 people. Details have not been revealed on the kind of explosive device that was used. However, photographs of the incident show a white bucket on fire inside a supermarket bag. There doesn’t seem to have been extensive damage in the tube.

Metropolitan Police Assistant Commissioner Mark Rowley said, “As you will have seen there are reports of 18 injuries. I understand most of those to be flash burns. The scene currently remains cordoned off and the investigation continues. The investigation is being led by the Metropolitan Police counter terrorism command. And there are many urgent inquiries ongoing now with hundreds of detectives involved looking at CCTV, forensics work and speaking to witnesses.”

Prime Minister Theresa May tweeted: "My thoughts are with those injured at Parsons Green and emergency services who are responding bravely to this terrorist incident."

Our assessment is that this is the fifth terrorist attack that has taken place in the UK in 2017. This is one of the longest periods of sustained terrorist activities that has occurred in the region. According to authorities, six other terror plots have been thwarted. Clearly, this a troubling pattern that needs to be addressed by the government and the law enforcement agencies. 36 people have died this year due to terrorism. This has to be addressed.