TECH LAYOFFS: HERALDS OF A RECESSION?

Faced with the twin shocks of the Russia-Ukraine war and a global monetary policy tightening, most big tech companies have announced massive layoffs. An industry that some say made immense profits from the pandemic lockdowns now cites a slowdown in business growth, revenue slump, and diminishing profitability due to falling demand.

Under Elon Musk’s sweeping reforms, Twitter has laid off about 50 per cent of its workforce, while tech giant Meta Platforms Inc. has issued the dreaded pink slip to about 11000 of its employees.

Much of this recession can be credited to a precipitous decline in the activity of the world’s largest economies — the U.S., Europe and China.

As per the IMF, the U.S. economy is slated to slow down to 1 per cent in 2023 from 5.7 per cent in 2021. The slowdown has been triggered by the U.S. Federal Reserve's increase of interest rates by a cumulative 375 bps. It is hoped that a tighter fiscal policy would likely control the skyrocketing and persistent inflation plaguing the country. This is perhaps the most aggressive policy-tightening cycle since the late 1980s.

The market has responded almost immediately with a drop in consumer demand, advertising revenues and prices. This situation has brought a recession in its wake, as a response to which businesses are slowing down hiring and laying off workers as part of cost-cutting tactics. Private companies are more agile than government agencies in recalibrating their business models to an impending 'perfect storm' in the financial markets. The signs, therefore, are dire for the global macroeconomic landscape. 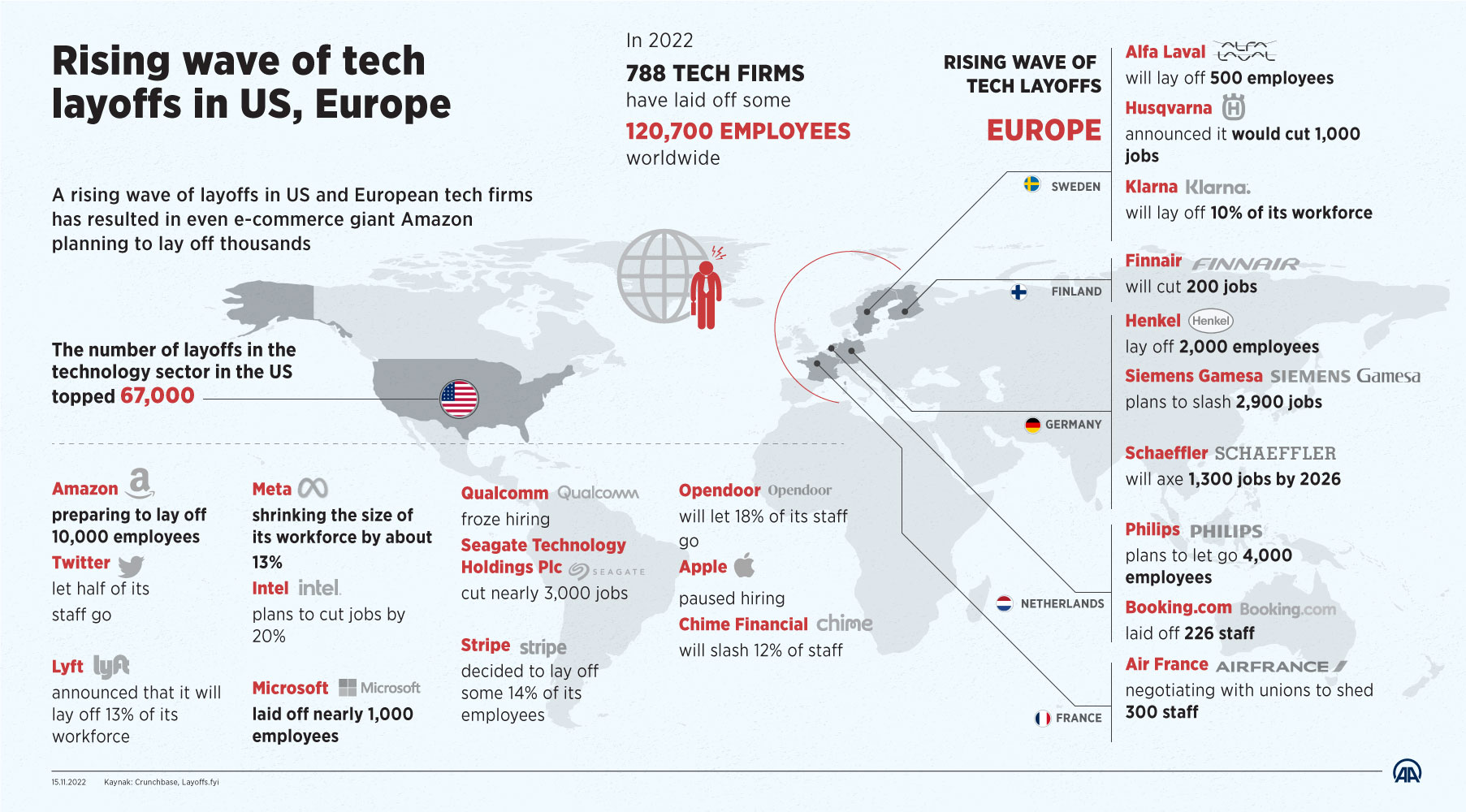 Many have attributed this mass layoff to an overhiring by companies during the digital services boom of the pandemic, especially in social media and ed tech firms. The current rising inflation and interest rates, coupled with an unfavourable stock market, have thwarted the predictions that the boom would persist, warranting companies to save resources by conducting mass layoffs.

Another line of argument claims that mass layoffs are historically commonplace once big companies reach the Series C funding stage. The current dynamic macroeconomic environment and overnight regulation changes, like ByteDance getting banned in India, have made it evident that both established companies and startups must adapt quickly and take up difficult capital efficiency measures to achieve and retain profitability.

What is undisputed, however, is that certain job profiles not considered essential to operations, such as chief information security officer, chief privacy officer, head of trust and safety, human rights and (non-English) language moderation teams etc., were the first to get the axe.

The change of ownership of Twitter has created the greatest shock waves in the digital job market. Having established an industry reputation for protecting freedom of expression against state pressure and promptly taking down posts that seem inconsistent with local law, human rights or its company values, the social media platform is now on the cusp of a major transformation.

Elon Musk, the ultimate businessman, is in a hurry to make his $ 45 billion investment work for him. He intends to stop the outflow of advertisers and create value-added services like Blue Tick verification, digital payments etc., to turn Twitter into a profit-generating vehicle. The shakedown includes thinning the ranks of its employees worldwide, and Musk started the exodus by first firing Twitter's top echelon- CEO Parag Agrawal, CFO Ned Segal, and the head of legal affairs and policy, Vijaya Gadde. It was but natural for lower ranks to follow.

The worrying part is that Twitter is not owned by Elon Musk alone (with his own conculcated idea of free speech) but includes government entities from Saudi Arabia and Qatar, who cannot be considered as 'protectors of free speech'. Musk's priorities in the spectrum between absolute free speech and absolute government compliance will set the tone of the digital media's commitment to protecting civil and political rights as well as dissidents.

It was worrying to note that the layoffs were not only abrupt but conducted in an unprincipled manner. Twitter layoffs were haphazard and arbitrary, done after a week of fear, uncertainty, and 12-hour working days. Many of the 3,700 people laid off found out about their termination when they couldn't log into their company email. Some are already suing Twitter for violating labour laws by not giving them enough notice. A typical case is that of an Indian technical programme manager at Meta who has only two weeks to find a new job before his expiring H1-B visa threatens his deportation from the U.S. Twitter's layoffs were so poorly thought through that the company is already reaching out to dozens of former employees to hire them back.

Tripe, the financial services and software company, was the only company to stand out. It received praise for conducting compassionate layoffs, which were as small as possible, done only as a last resort with high severance packages, were communicated clearly and conducted with transparency and fairness after an inclusive discussion with stakeholders and taking into account the feelings and workloads of those left behind.

The Indian digital industry has not escaped the storm, with major tech companies retrenching their Indian staff with no notice period. Indian start-ups are also affected by falling profit levels, and over 15000 employees found themselves without jobs overnight. Many young professionals faced rescinded job offers and reduced hiring, with companies focusing on experienced talent when filling new roles. While India looks to maintain a reduced yet growth rate even during the recession, the mass layoff of the Indian workforce, both in the country and abroad, is adding to the already high educated unemployed rate and shrinking offshore contracts.

Savings solely from mass layoffs are often short-sighted and rarely help a company's financial performance beyond a quarter or two of the financial year. They also result in adverse outcomes like loss of institutional memory, productivity, and morale. Layoffs can also lead to burnout, as remaining employees are forced to make up for those who left, which in turn causes more people to leave. Twitter workers have already reported extreme workloads to compensate for all the layoffs and to contend with Musk's new projects. Most importantly, poorly done layoffs harm a company’s future hiring prospects, stymieing its acceleration when it's the time to rebound.