The recent tariffs imposed by the current White House has threatened ties between the US and its trading partners including India.

Will India officially lodge a complaint against the development with the World Trade Organization?

On March 2018, US President Donald Trump announced his intention to impose tariffs of 25% on imported steel and 10% on imported aluminium “for a long period of time”. The President cited “national security” in order to circumvent WTO commitments. Trump’s administration has cited Section 232 of the Trade Expansion Act of 1962. This section gives the US president the power to impose tariffs on the grounds if “an article is being imported into the United States in such quantities or under such circumstances as to threaten or impair the national security.” This particular act has not been imposed by the US government since the inception of WTO.

US’ ties with a number of its trading partners including allies like Canada and the Britain has been strained as a result of the tariffs. China has also aggressively condemned the decision by the Trump White House. In addition, Jean-Claude Juncker, the president of the European Commission, stated such an action by the U.S. would face a legal challenge at the World Trade Organization.

The WTO is the only international organization handling the regulations of trade between countries. WTO’s agreements are negotiated and signed most of the trading nations around the world and approved in respective parliaments. The organization’s primary objective is to make sure that trade flows as predictably, effortlessly, efficiently, and freely across nations. 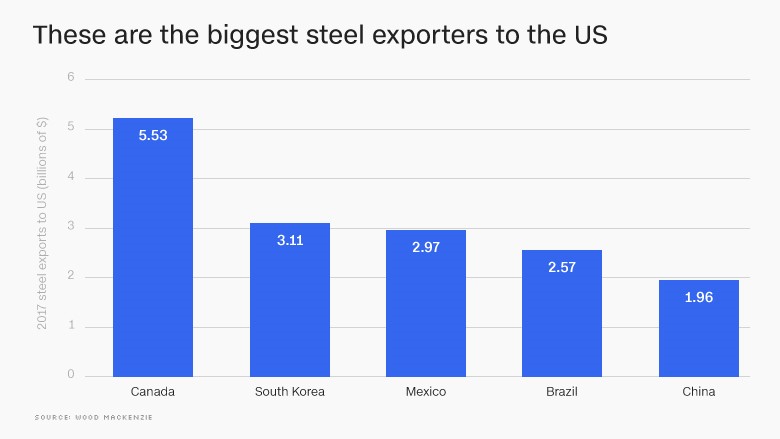 The US has traditionally enjoyed relatively warm ties with India. Indian Prime Minister Narendra Modi visited America in 2017 after Trump assumed power. However, Trump has also complained about US’ trade ties. In February 2018, Trump praised PM Modi but also said that the US was “getting nothing” from the trading partnership between the two nations.

In March 2018, US launched a trade challenge against most of India’s export subsidy programs at the World Trade Organization (WTO), after Trump threatened to impose disciplinary duties on countries that export more to the US than they import from it.

India’s commerce secretary Rita Teaotia told reporters last week: “The tariffs have been imposed on security grounds and some of the key trading partners have been excluded from that. On the basis of India’s strategic partnership with the United States, we are certainly not a security threat to the United States, and an exemption for India on the same grounds should also be available.”

India only accounts to around 2% of US’ steel and aluminium imports. However, officials in Delhi are still concerned that this will simply be the beginning to more tariffs that would negatively affect India.

Biswajit Dhar, head of the Centre for WTO Studies in New Delhi told Financial Times, “We are coming to a position where these issues must be addressed, and the mini-ministerial meeting is the ideal place to do it. Along with many other countries, India is a victim of the US taking actions that are clearly against WTO rules. They should approach the WTO with their complaint together.”

In fact, 24 countries are expected to come together for an informal WTO meeting in New Delhi on March 19, 2018. The Indian government has still not signaled whether or not it will be pursuing a legal complaint against the WTO.

Meanwhile, experts and analysts have stated that the tariffs are likely to hurt American businesses as well. Stifel Financial's chief economist Lindsey Piegza said, “We really do expect price increases on aluminum and steel specifically, but we're also looking for cost increases in all products that heavily rely on (them) as a productive input.”

Our assessment is that tariffs have the potential to negatively impact both the American and global economy. Trump’s protectionist views can further isolate the world’s largest economy from the rest of the nations. India’s chief concerns will not be regarding steel and aluminium tariffs but rather with its bigger exports such as pharmaceuticals and consumer goods. Telecommunications industry is also a big export market for India and would be affected if tariffs are imposed on these commodities as well.