Experts have begun sounding the alarm that the proxy war in Syria could result in an all-out conflict between US and Russia. US President Donald Trump has..

Experts have begun sounding the alarm that the proxy war in Syria could result in an all-out conflict between US and Russia. US President Donald Trump has warned the Russians of missiles that might be headed to Syria and Russia has responded noting that there will be repercussions.

What is the West’s motivation to enter military conflict in Syria?

Over the span of several centuries, Syria, which was at the forefront of the Islamic Caliphate witnessed multiple invasions and occupations. The Romans to the Crusaders and the Turks have tried to gain control of the region.

On 7th April 2018, news emerged that another large scale chemical attack had taken place in Syria. This occurred in the city of Douma and resulted in the deaths of at least 42 people. The US government accused the Assad government of having orchestrated this attack. This is not the first time.

The Syrian government has often been accused of conducting chemical warfare against its own citizens in rebel regions. In April 2017, news emerged of an alleged chemical attack on a rebel-held Syrian town. At least 74 people, including 11 children, were killed in Khan Sheikhoun, Idlib province. At the time, the Syrian government once again denied culpability and Russia backed the Assad government. US President Donald Trump launched 59 Tomahawk missiles in response just two days later. 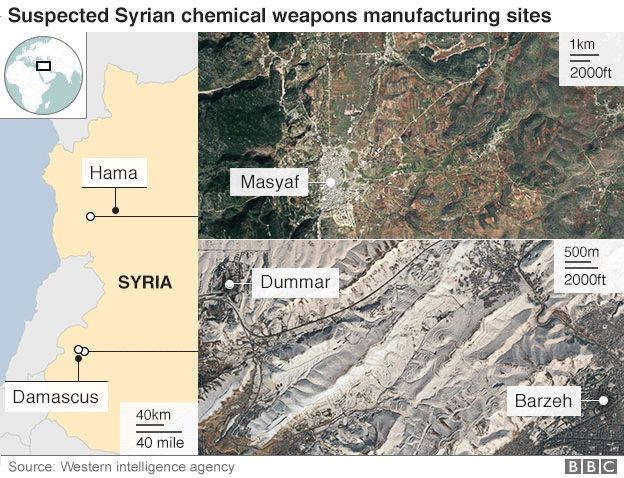 During the emergency UN meeting that was held in the wake of the attacks, US and Russia exchanged charged rhetoric. US President Donald Trump has threatened to take military action against Syria and has taken to Twitter to warn Russia of the same. He took to Twitter to note, “Russia vows to shoot down any and all missiles fired at Syria. Get ready Russia, because they will be coming, nice and new and “smart!” You shouldn’t be partners with a Gas Killing Animal who kills his people and enjoys it!” Meanwhile, Sarah Sanders, the White House spokesperson has noted that “nothing is off the table” and a response is being drafted by Washington.

CNN report notes that samples from the attack have not been delivered yet. The report states, “No samples have been delivered yet from the site where activists say two chemical attacks struck Saturday, partially because Douma is the last rebel-held town and otherwise under siege. The gas appears to have sunk into basements.”

Russia has taken an aggressive stance and has promised to respond. "If there is a strike by the Americans, then we refer to the statements of President [Vladimir] Putin and the chief of staff that the missiles will be downed and even the sources from which the missiles were fired," Russian Ambassador to Lebanon Alexander Zasypkin told Hezbollah's al-Manar TV.

“It’s unlikely that another set of one-off strikes will deter Assad,” said Jennifer Cafarella, a Syria analyst at the Institute for the Study of War in Washington. Trump needs to “establish a more effective deterrent by inflicting greater costs on Assad and perhaps his backers.”

The World Health Organization (WHO) said partners told them 500 people that were affected displayed signs “of severe irritation of mucous membranes, respiratory failure and disruption to central nervous systems of those exposed." BBC reported that according to sources, UK Prime Minister Theresa May was prepared to join military attack in Syria and the French government revealed that if strikes are approved, it would target chemical sites.

Russia and the Assad government claim that there is a larger conspiracy afoot regarding Syria. Russian foreign ministry spokeswoman Maria Zakharova asked whether the aim of Western strikes might be "to quickly remove the traces of the provocation... [so] international inspectors will have nothing to look for in terms of evidence".

In addition, some have also expressed concern over whether President Trump is right in trying to stoke an already dangerous warzone. "He's the commander in chief. I can't remember ever in my lifetime or certainly in my study of American history a commander in chief treating the potential use of armed force in this cavalier a fashion," said retired Rear Adm. John Kirby, a CNN national security analyst and former State Department spokesman. "It is irresponsible that he would just tweet out something specific about a strike when lives are at stake, not just lives on the ground, but American lives and probably allied lives," he said.

Our assessment is that this is possibly the first time the threat of a direct war between Russia and the US has emerged since the Cold War period. The US President has threatened of a military strike multiple times since the attack took place and Russia has not backed down to threats from Washington.

US is currently actively engaged in multiple war zones including the long running Afghanistan war. US’ invasion of Iraq post 9/11 has been criticized over the years. At the time, Washington claimed that there were weapons of mass destruction in Iraq – a claim that turned out to be false upon further investigation. Hence, it is perhaps prudent to wait to analyze samples from the attack zones before instigating a response.