Syrian request to the UN

Syria has requested the UN to urge condemn airstrikes conducted by Israel in the region. Israel has been involved in the Syrian Civil War as part of the proxy war being fought..

Syria has requested the UN to urge condemn airstrikes conducted by Israel in the region.

Israel has been involved in the Syrian Civil War as part of the proxy war being fought against Iran.

Relations between Iran and Israel can be considered extremely hostile. Ties had considerably deteriorated during the 1979 Iranian revolution and turned hostile in the 90s. The two nations now engage in proxy warfare. Israel’s role in the Syrian War has much to do with its hostile relations with Iran. Though Israeli official position is neutrality in the Syrian conflict, a number of Iranian proxy militant organizations have been involved in the Syrian War - most notably the Hezbollah, a notable foe of Israel. In this regard on a number of occasions, Hezbollah and allied organizations were suspected of attacking Israeli positions on Syrian and Lebanese borders, while Israel has been suspected of striking Iranian and Hezbollah convoys on Syrian and Lebanese territories. In March 2017, Syria fired missiles at Israeli warplanes after a series of Israeli airstrikes inside Syria — a rare military exchange between the two hostile neighbors that was confirmed by both sides. This is seen as a serious escalation of tension even though Israel has been largely unaffected by the Syrian civil war raging next door, suffering mostly sporadic incidents of spillover fire that Israel has generally dismissed as tactical errors by Syrian President Bashar Assad's forces. Israel has responded with limited reprisals on Syrian positions in response to the errant fire. 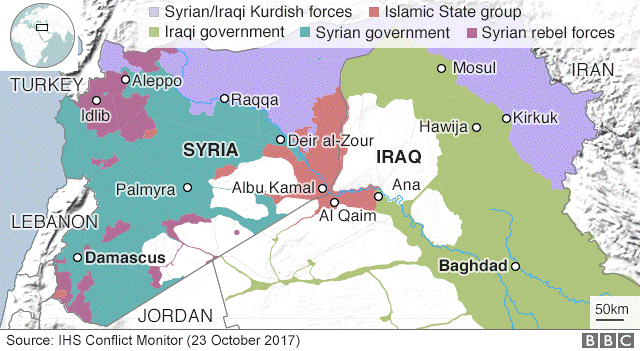 In November 2017, Syrian state television accused Israeli warplanes of carrying out an air strike in the nation overnight. The Syrian Army reportedly launched anti-aircraft missiles in response, but missed as the planes returned to Israel intact. Even though Israel has not officially confirmed or denied the reports, former air force chief revealed a few months ago that the nation had carried out almost 100 air strikes since 2012.

"I can't, of course, relate to reports about the Israel Defense Forces' attack in Syria, but regardless, Israel's position is clear: smuggling arms to Hezbollah is a red line in our eyes," Intelligence Minister Israel Katz told Army Radio on Thursday. Another red line was "Iran's consolidation in Syria” according to Katz. He added, “I think the other side also understands this clearly and actions that took place in the past for which we did take responsibility, were actions that were according to these lines.”

According to reports, the Syrian Foreign Ministry has sent at least two letters to the UN, requesting the organization to condemn the air strike on a copper factory in the province of Homs. It has also called on the UN to urge Israel to cease its activities.

“This new Israeli aggression is proof that the Israeli occupation authorities are not satisfied with their practice of state terrorism against the Arab population in occupied Palestine, Syria and Lebanon, but are seeking the role of an official sponsor of terrorism,” SANA news agency cited the Ministry as saying.

Syria has played a key role in the US-led coalition’s war against terrorism. The government has fought off ISIS troops. In November 2017, Syria's military and allied forces completely recaptured Deir Az Zor city from ISIL. It was the armed group's last urban stronghold in the war-torn country.

"The armed forces, in cooperation with allied forces, liberated the city of Deir Az Zor completely from the clutches of the Daesh terrorist organization," an unnamed military source was quoted as saying, using an Arab acronym for ISIL.

Our assessment is that Syria is currently an important and strategic ally in the war against terrorism. It now has the leverage as it has been able to recapture the last stronghold of ISIS in the region. In 2017, Syrian Permanent Representative to the UN Bashar al-Jaafari accused Israel of supporting Islamic State in Syria and indirectly, but significantly, aiding the terrorist group.