There has been increasing speculation that the Syrian conflict could escalate into a “Third World War”. The regions is the site of multiple conflicts, and there are..

There has been increasing speculation that the Syrian conflict could escalate into a “Third World War”. The region is the site of multiple conflicts, and there are numerous international forces at play. The recent US-led airstrikes in response to the use of chemical weapons, were disparaged by Syrian allies Russia and Iran. Russia has threated to respond if the US intervenes in the region. Trump has said that the US is ‘prepared to sustain’ this response.

The Syrian Civil War has been going on since 2011. It began during the Arab Spring protests due to resentment towards the government of President Bashar al-Assad. The war is being fought by several factions: the Syrian government and its allies, a loose alliance of Sunni Arab rebel groups (including the Free Syrian Army), the majority-Kurdish Syrian Democratic Forces (SDF), Salafi jihadist groups (including al-Nusra Front) and the Islamic State of Iraq and the Levant (ISIL), with a number of countries in the region and beyond being either directly involved, or rendering support to one or another faction. Russia and Iran are two of the Assad regime’s closes allies while the US, France, and other members of NATO have criticised the Syrian state.

The Syrian government has been accused of conducting chemical warfare against its own citizens in rebel regions. A UN investigative body into chemical warfare in Syria, the Independent International Commission of Inquiry on the Syrian Arab Republic, was vetoed by Russia in 2017. Before its demise, the agency reported that at least two major chemical attacks were carried out in 2014 and 2015.

On 7th April 2018, news emerged that another large scale chemical attack had taken place in Syria. This occurred in the city of Douma and resulted in the deaths of at least 42 people.

Russia and the West

Tensions between Russia and the West are at a high. Russian intervention in Ukraine, and the annexation of Crimea drew strong criticism from the West and resulted in sanctions from the US and the EU. Russia has been accused of influence campaigns and interference in elections, including the 2016 US Presidential elections. Russia has also been accused of cyberattacks such as the widely destructive NotPetya virus. Earlier this year, following a nerve attack on a British spy with Kremlin links, US and other NATO countries expelled over 100 Russian diplomats. Russia responded in kind. 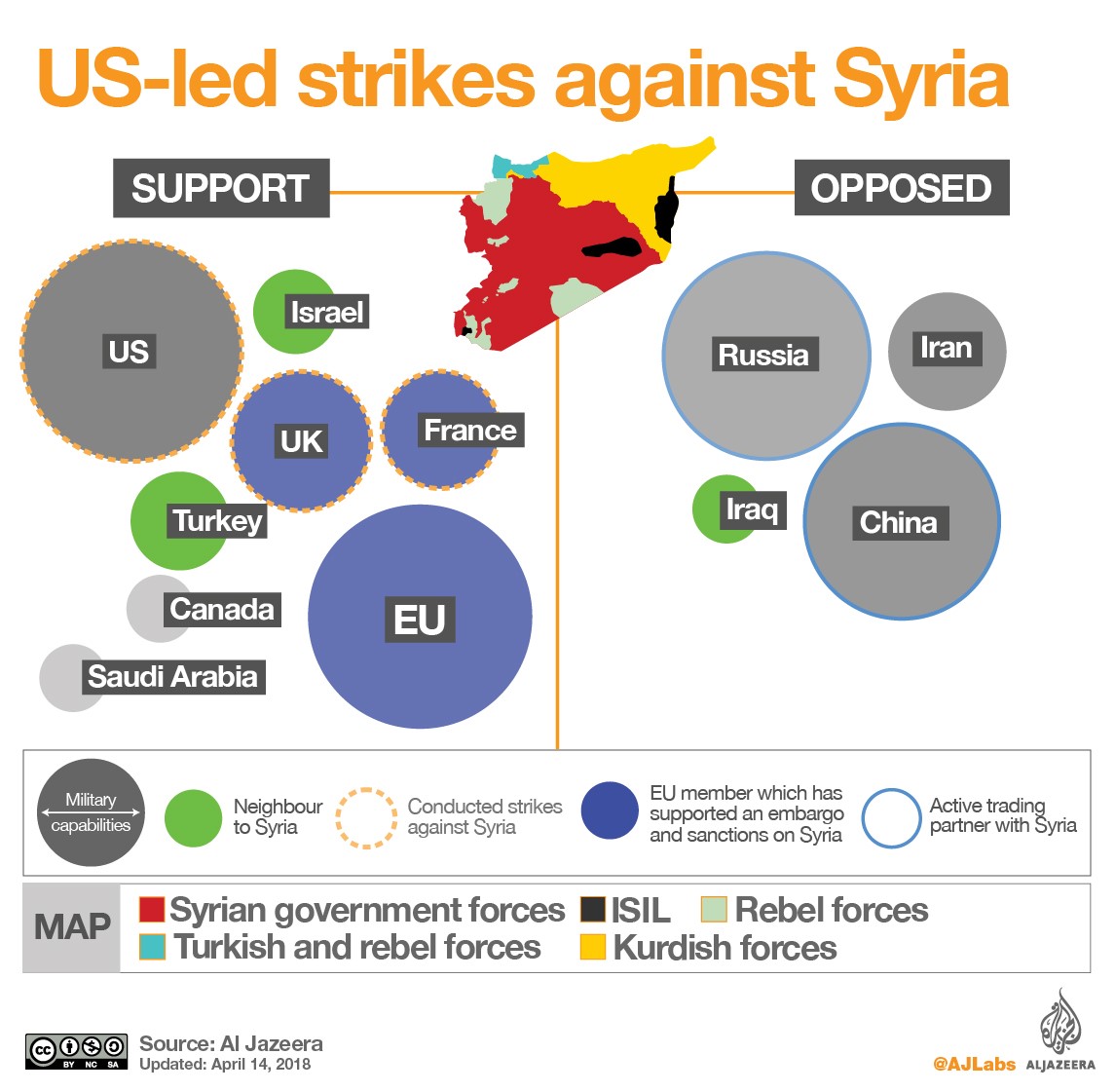 On April 13th, the United States and its allies UK and France conducted a series of air strikes on Syria, in response to Assad’s alleged use of chemical weapons in Douma in Eastern Ghouta. After the attack, US President Trump declared, “mission accomplished”. NATO has expressed its support for the strikes. However, numerous observers noted that the strikes are unlikely to resolve conflict in the region, as they will not deter President Assad, who has thus far refused to reach a compromise to end conflict. Additionally, it has been reported that the strikes did not destroy all of Assad’s chemical stockpile.

Russia has signalled that any strike in Syria would be a step towards war with the US. Russian officials have repeatedly warned that there would be repercussions to military aggression in Syria, and that Moscow would respond. They have stated that “if such actions committed in violation of the U.N. Charter continue” it would “lead to chaos in international relations.” Vassily Nebenzia, Russia's ambassador to the UN, said that the strike was a setback to attaining a political solution to the Syrian war. Russia rejected the call for an investigation into the alleged chemical attacks.

Experts have begun sounding an alarm regarding escalation in Syria. There has been speculation that the Syrian conflict could escalate into a “Third World War”. The UN's secretary General Antonio Guterres has said that the Cold War seems to be "back with a vengeance". "The mechanisms and the safeguards to manage the risks of escalation that existed in the past no longer seem to be present," he said.  Other analysts have echoed this sentiment. Lina Khtib, Middle East expert at Chatham House, noted that “the Syrian conflict is already a global conflict.” She stated that it was “a new kind of war by proxy.”

Additionally, there are multiple other conflicts playing out in the country. It has been argued that the presence of so many players in the region increases chances of misunderstanding and conflict. Analyst Shashank Joshi, pointed out that a number of these countries are being led by strong-man nationalist leaders, which could also make it difficult to back down from a crisis. Trump, for example, has surrounded himself with war hawks such as National Security Advisor John Bolton.

Other analysts noted that an all-out war in the region, particularly one between Russia and the United States seems unlikely.

It is possible that after the aggressive strikes by the US and its allies, chemical attacks on civilians in the region will come to an end. As chemical attacks are a main point of contention in the West, this would mean that it is “mission accomplished”. Leaders such as US Secretary of Defense Mattis and UK Prime Minister Theresa May, have emphasised that the US-led strikes were a “one-time” incident intended to deter Assad from the use of chemical weapons, not a call for “regime change”.

Commentators added that there have been no immediate indications of war. Neither the US nor Russia has cut off communications or resorted to direct attacks. Malak Chabkoun writing for Al Jazeera pointed out that the strikes avoided Russian-controlled Syrian airspace. Chabkoun argued that US priorities in Syria remain a “continuation of the Obama administration's "war on terror" policy.” Additionally, the existence of the United Nations, as well as numerous arms agreements, international institutions and mechanisms could prevent direct conflict.

Our assessment is that conflict in Syria is growing. It is too early to credibly judge the outcome of the US-led strikes. However, as stated previously, it is possible that these strikes could end up sparking a chain reaction in Middle East. Assad has ignored all “red lines” previously laid out by the West. Its ally Russian has indicated that it is willing to respond aggressively. However, it is important to note that there are numerous checks and balances in the world today to prevent all-out war. Additionally, war is an expensive endeavour that is difficult to end; economic repercussions may also dissuade leaders. We believe that a war between US and Russia would lead to further suffering and loss of civilian life in Syria. With the involvement of multiple players, the situation could deteriorate rapidly. World leaders must begin to de-escalate conflict in the region.