The ongoing conflict between Turkish government and a number of US-aligned militias has stalled the fight against the Islamic State. The Pentagon has announced a “pause” in..

The ongoing conflict between Turkish government and a number of US-aligned militias has stalled the fight against the Islamic State.

The Pentagon has announced a “pause” in ground operations in Afrin.

The People's Protection Units also popularly known as the YPG was formed in 2004. It is a mainly-Kurdish militia in Syria and the primary component of the Democratic Federation of Northern Syria's Syrian Democratic Forces. The group is predominantly made of people belonging to the Kurdish ethnic group. The Turkish government has repeatedly noted that this group is a "terror army" that presents a danger to Turkish security. The various factions fighting within the region have further complicated matters. Even though Turkish forces are fighting YPG, the group is considered a key ally by the US in the fight against ISIS.

In early 2015, the group won a major victory over the Islamic State at the Siege of Kobanî, where the YPG began to receive air and ground support from the United States and other coalition nations. Since then, the YPG primarily fought against ISIL, as well as on occasion fighting other Syrian rebel groups. The US government has always stated that even though they arm the YPG, they only do so in regions where the group is fighting the ISIS.

In January 2018, Turkish forces entered northwestern Syria to attack the YPG.  This military operation was named Operation Olive Branch. The group has its strongest presence in Afrin. 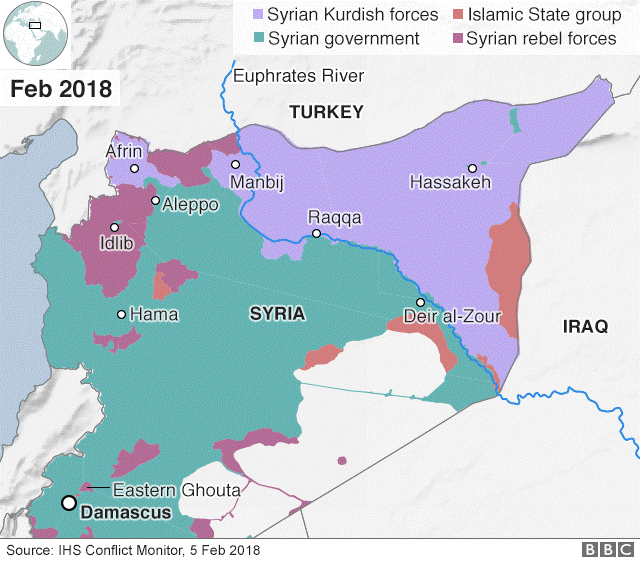 Pentagon has stated that the ongoing operations against ISIS is on “pause” in eastern Syria. Turkish government is currently in conflict with YPG, a Kurdish militia group which is also aligned with the US government in its fight against ISIS.

“It is an extraordinary situation because you have US proxy army in Syria, i.e. the Kurds, have departed the battlefield that the US has them on to go fight a US ally, a NATO ally Turkey,” Daniel McAdams, the executive director of the Ron Paul Institute, told RT.

“Some fighters operating within the SDF have decided to leave operations in the middle Euphrates river valley to fight elsewhere, possibly in Afrin,” Major Adrian Rankine-Galloway, another Pentagon spokesman, admitted on Monday. “They’re not fighting ISIS anymore, and that basically meant that they’re not taking territory back from ISIS as quickly as they had been in the past.”

It is now being reported that Turkish ground troops have reached northern Syrian to combat YPG. The Syrian Observatory for Human Rights (SOHR) has noted that 36 pro-Syrian government troops have been killed as a result of an airstrike by Turkish forces. Syrian government has stated this is an attack on its sovereignty.

Our assessment is that the multiple conflicts playing out in Syria has resulted in a humanitarian crisis in the region. The dearth of medical supplies can result in a catastrophe leading to the deaths of civilians as well. Agencies have struggled to provide aid to the embattled region. This could also cause further tensions between US and Turkey which are both allies.