Surviving the Chip Crisis – Part I

Mr. Prashant Doreswamy Country Head of Continental India and Managing Director of Continental Automotive. This article is based on his exclusive insights on the automotive chip crisis, published as a two-part series.

As the automotive sector continues to grapple with a supply chain crisis, it is critical to assess the underlying causes. In this context, one must first appreciate the massive transformation that has been witnessed in the industry over the last few years.

In the 1970s-80s, cars used to be purely mechanical boxes made of steel, plastic and rubber. Over time, however, electronics found their way into automotive assemblies, paving the way for an ‘electronic revolution’. Naturally, software formed an integral part of this upheaval.

Today, the global automotive industry is valued at $2.78 trillion and is projected to touch $ 5.5 trillion by 2030. The sector can be broadly viewed in two segments - hardware and software. The hardware component, which consumes commodities like steel, aluminium and plastics, is estimated to be $2.47 trillion. This is expected to go up to $ 2.8 trillion over the next few years.

On the other hand, software, which is valued at $280 billion today, has the potential to reach $1.2 trillion. Similarly, software as a service, which is worth around $30 billion, is likely to hit $1.5 trillion over the next nine years. Clearly, the automotive sector is poised to achieve huge growth, primarily driven by software and software systems.

Yet another factor to be considered is the manner in which entire functions in automobiles are now being driven by software. To enable the same, high-processing microchips are required, thereby augmenting the demand for microcontrollers. In modern cars, every function is driven by the electronic control unit (ECU) or the embedded control unit, which is a small computer by itself. Predominantly propelled by software and electronic systems, this could take the form of a light control unit, steering control unit, engine control unit, transmission control unit etc.

Owing to the proliferation of such ECUs, the usage of microcontroller units (MCUs) has increased. An average vehicle like a Maruti Suzuki hatchback has more than 20 MCUs, while other high-end cars may have up to 100 MCUs. The supply chains for these MCUs are complex, as multiple MCU suppliers are often involved in the process. The technology is such that no single semiconductor supplier can provision the entire Tier-I companies with connectivity control units.

Different suppliers use different technologies, and even within the same supplier, the technology may vary. For example, a car model that has about 20 MCUs may have six to eight suppliers.

To further add to these complexities, MCUs do not allow for second sourcing. Components cannot be purchased from an alternate supplier to reduce supply chain risks. Every MCU comes with its own hardware and software, which involves considerable development costs. If two MCUs have to be developed for a single module, the costs would be prohibitive for automobile manufacturers. In other words, there are significant entry and exit barriers for the development of MCUs.

Moreover, all MCUs have a proprietary architecture, rendering it difficult for automotive firms to shift from one supplier to another. The only solution is to increase capacity if the MCUs are limited. However, even this has proven to be challenging, as all suppliers depend on the same foundry. 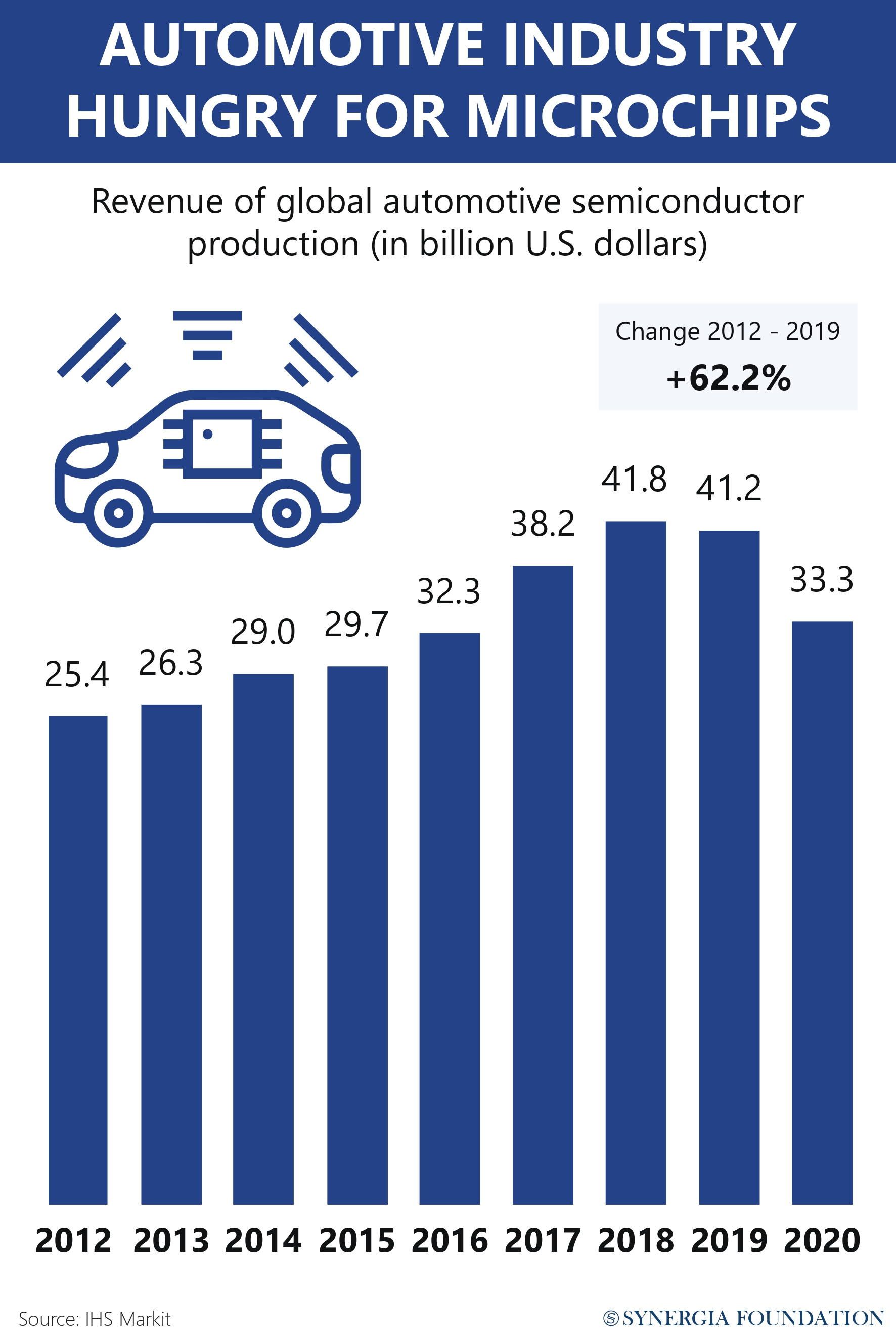 To better understand the current semiconductor crisis in the automotive sector, it is important to analyse how the industry works. The entire process starts with a microcontroller. Tier I firms receive their orders from customers in the morning, with a deadline to supply it by the evening. The latter’s operations are based on the ‘just-in-time’ model, wherein they optimise their financials by not maintaining inventory. However, on their part, Tier I suppliers retain some amount of inventory that covers 10-15 days. The MCUs are then embedded onto the printed circuit boards of ECUs, which are eventually supplied to the original equipment manufacturers (OEMs).

The manufacturing of MCUs, however, is a long-drawn process. It starts with the silicon ingot and other raw material, which is then converted into wafers. The entire process usually takes about 4-6 months, as it must undergo more than 18,000 different operations. There is also a huge ‘work-in-process’ inventory involved.

Given this reality, it is important to appreciate that microcontrollers are not a ‘just-in-time’ industry. If an order for MCUs is placed today, it will reach the Tier I suppliers only six months later. Although a microcontroller may cost merely € 3-4, it must be remembered that it can hold up a $ 40,000 car on the assembly line!

As experts study the impact of the COVID-19 pandemic on the current chip crisis, it must be recalled that a similar situation had played out in the automotive sector after the 2008-09 financial crisis. Post the economic slump, there was a huge demand for chips, which exceeded the capacity that was available. As a result, the industry was forced to allocate and ration its supplies.

Nearly a decade later, the pandemic has brought about an identical, if not worse, situation. As the industry went down, everyone resorted to the age-old practice of optimizing financial parameters. With the drop in volumes, they cut their inventory to improve cash flows.

As it is, the industry was facing challenges even before the onset of COVID-19. The sentiment was conservative, and schedules for the semiconductor companies were revised on the assumption that the OEMs would not produce many cars. Therefore, proactive cuts were imposed on the production of semiconductors.

In the post-COVID phase, however, the industry picked up much faster than anticipated. By September-October 2020, the demand had reached pre-COVID levels, with everyone rushing back to the chip manufacturers. By then, the manufacturers had already sold their additional capacities to other companies.

This is because the semiconductor industry is highly investment-intensive. There is no redundancy in the supply chain to absorb additional demands. The chip manufacturers work on very thin margins and need to have a capacity utilization of 90-95 per cent. Below this level, fixed cost absorption becomes a challenge.

Moreover, since the investments are very high, they are required to make that money back within a timeframe of 5-6 years. This is especially critical, as technological obsolescence is high. Every day, some or the other player is likely to come up with new chips and technologies.

Since the industry runs on such critical parameters, semiconductor manufacturers were forced to sell their additional capacity to adjacent markets, when the automotive industry revised its schedules. This was helped by the fact that there was a huge spurt in demand for chips, as people started working from home. The growing usage of laptops, phones, gaming devices and the Internet of Things proved to be a veritable opportunity for the industry, along with the adoption of 5G in many countries.

With this reallocation of capacity, the automotive industry was hit by a chip crisis. In navigating the same, did it learn from its previous experiences during the 2008 financial crisis? Read Part II to find out.