On Wednesday, 31 January 2018, a rare celestial convergence named as "Super blue blood moon" occurred for Australia, Asia and some parts of the US and Eastern Europe..

On Wednesday, 31 January 2018, a rare celestial convergence named as "Super blue blood moon" occurred for Australia, Asia and some parts of the US and Eastern Europe; there was a lunar eclipse, as the Earth passed between the Sun and the Moon.

A lunar eclipse occurs when the Moon passes directly behind the Earth into its umbra (shadow). This can occur only when the sun, Earth and moon are aligned (in "syzygy") exactly or very closely so, with the Earth in the middle. Hence, a lunar eclipse can occur only the night of a full moon. The type and length of an eclipse depend upon the Moon's location relative to its orbital nodes.

A super moon is a full moon or a new moon that approximately coincides with the closest distance that the Moon reaches to Earth in its elliptic orbit, resulting in a slightly larger-than-usual apparent size of the lunar disk as seen from Earth. The technical name is the ‘perigee syzygy’ of the Earth–Moon–Sun system or more simply full (or new) Moon at perigee. The term super moon is astrological in origin and has no precise astronomical definition.

The closest supermoon of the century will occur on December 6, 2052. The oscillating nature of the distance of the full and new moons is due to the difference between the synodic and anomalistic months. The beat period between the two is roughly 14 synodic months.

Occasionally, a supermoon coincides with a total lunar eclipse. The most recent occurrence of this was in January 2018, and the next will be in January 2019.

This is the first "Super Blue Blood Moon" which occurred in about 150 years. The last one was in 1866. It occurs when a blue moon (a second full moon in a calendar month), a super moon (when the moon is unusually close to Earth, making it bigger) and a blood moon (a moment during an eclipse when the moon appears red) coincides.

This red glow is produced by the same effect that gave us blue skies and red sunsets, Dr. Shannon Schmoll, director of Abrams Planetarium in Michigan, said. "Some sunlight is skimming through the Earth's atmosphere on its way to the Moon, and it also gets refracted or bent towards the Moon a little bit," she said.

"So, we have this process of filtering out the blue light and leaving the red light to see. "And then having that light bent a little bit toward the Moon," she added.

Dr Schmoll said the coincidence of these three lunar events was a "good excuse to go out and look at the night sky". "I know some people did not like the term supermoon, since it's not always obvious how much bigger it is," she added.

The supermoon should appear about 7% larger than average and about 15% brighter. This particular view of our satellite, which remains the only object to which we have sent humans beyond Earth, comes at a time of resurgence for lunar exploration. 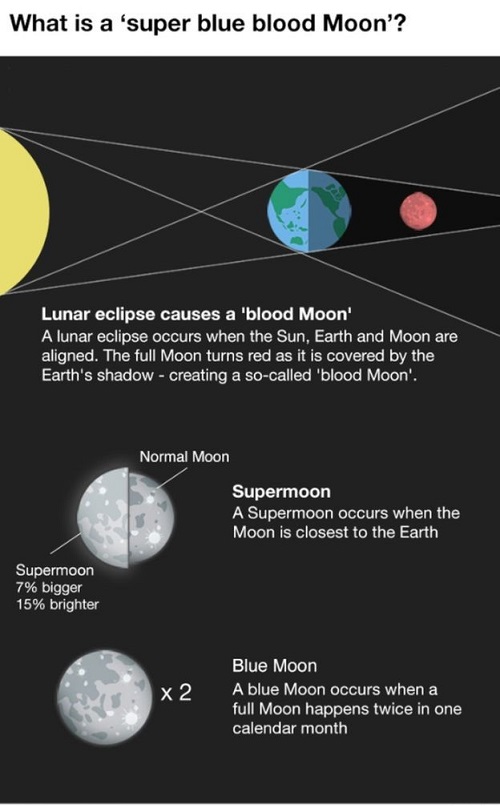 Our assessment is that the ‘Super blue blood moon’ was breath-taking. The vision of the moon at the fullest part of its cycle, at its closest point to Earth, filling the sky, was beautiful and mesmerizing.