China lost its ranking as the world’s number two stock market to Japan. After a slump this week, Chinese equities were worth $6.09 trillion compared to $6.17 trillion in Japan. The history of China's Stock Market is elaborate and complex, reaching back to the 19th century..

China lost its ranking as the world’s number two stock market to Japan. After a slump this week, Chinese equities were worth $6.09 trillion compared to $6.17 trillion in Japan.

The SSE Composite, also known as Shanghai Composite Index is the most commonly used indicator to reflect SSE's market performance. Constituents for the SSE Composite Index are all listed stocks (A shares and B shares) at the Shanghai Stock Exchange. At the end of 2006, the index reaches 2,675.47. Other important indexes used in the Shanghai Stock Exchanges include the SSE 50 Index and SSE 180 Index.

Japan Exchange Group, Inc. (JPX) is a Japanese financial services corporation that operates multiple securities exchanges including Tokyo Stock Exchange (TSE) and Osaka Securities Exchange (OSE). It was formed by the merger of the two companies on January 1, 2013. On 4th January, JPX was listed at TSE’s first section. JPX also assumed OSE’s own ticker symbol. In 2011, TSE and OSE decided to merge into one, as a solution to slowing market conditions in Japan. Until recently, it is the world’s third largest stock market, behind the Shanghai Stock Exchange. 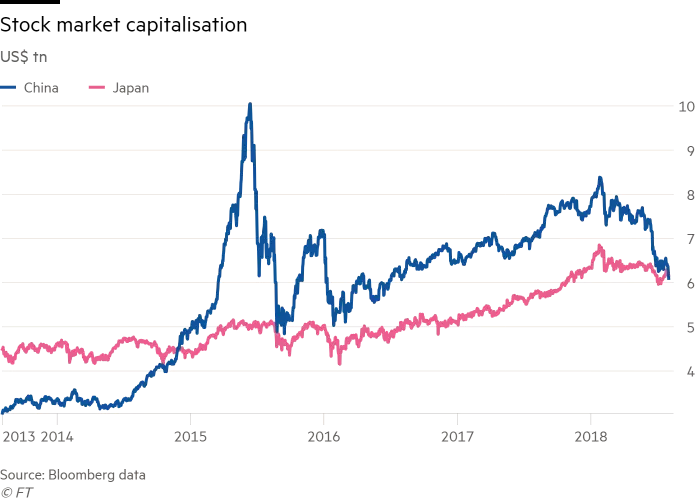 China has been knocked from its perch as the world’s second-biggest stock market by Japan following a months-long rout that has wiped $2.29tn off the value of its stocks from their January high.  Data from Bloomberg shows Chinese equities were worth $6.09tn as of Thursday’s close, while Japan’s market was valued at $6.16tn. The US remained the biggest stock market at $31tn. This marks the first time China has ceded the title since it overtook Japan for the number two spot in November 2014.

The CSI 300 index of major stocks listed on the Shanghai and Shenzhen exchanges is down by more than 17% year to date, while the onshore renminbi exchange rate has weakened 5.3% against the dollar. By comparison, Tokyo’s Topix index has fallen just 4% in 2018, while Japan’s yen has gained nearly 1% on the greenback. China’s stock market overtook Japan’s stock market in late 2014, then soared to an all-time high of more than $10 trillion in June 2015.

Japan’s benchmark Topix index remains one of the better-performing markets in Asia amid support from the Bank of Japan’s ETF purchases and as most companies continue to report robust earnings growth. Almost 60% of firms on the gauge that have reported in the current earnings season have beat analyst expectations. However, the yuan’s tumble has prompted forecasters to lower their estimates for the exchange rate. Deutsche Bank AG was among the latest to do so, cutting its year-end prediction to 6.95 per dollar from 6.8 on Wednesday, saying trade tensions will likely put persistent pressure on China’s current account in the next few years.

Chinese equities and the nation’s currency have taken a beating this year amid a trade spat with the U.S." Losing the ranking to Japan is the damage caused by the trade war," said Banny Lam, head of research at CEB International Investment Corp. in Hong Kong. "The Japan equity gauge is relatively more stable around the current level but China’s market cap has slumped from its peak this year."

China’s Politburo, a body comprising the Communist Party’s 25 most senior leaders, signaled on Tuesday that policy makers will focus more on supporting economic growth amid risks from the deleveraging campaign and the trade standoff. Still, the Shanghai Composite Index is headed for its worst week in more than a month.

"The market will likely continue to hover at low levels for the next couple of months," said Linus Yip, Hong Kong-based strategist with First Shanghai Securities Ltd. "But there’s still a chance that China’s stock market will recover with total capitalization ascending to the world’s No. 2 place again. After all, the economic fundamentals are still stable and growth momentum will resume after a short-term downturn."

Our assessment is that losing the number two title is a reminder that China’s role in global financial markets does not match its economic might. We believe that this shift in stock market ranking has happened due to the ongoing trade war with US. We feel that even though Chinese policy makers have pledged to open areas such as investment limits on industries, the foreign ownership of equities and bonds still remains low.