American President Joe Biden hosted the leaders of the Association of Southeast Asian Nations (ASEAN) in Washington, DC, on May 12 and 13 for a U.S.-ASEAN Special Summit. The Summit marks the first time ASEAN leaders have been invited to the White House in 45 years. President Obama was the first leader to host the Summit back in 2016, held in Rancho Mirage, California.

Apart from group discussion, President Biden also had a "quick, private time" with each of the leaders. Evidently, it was aimed to convey to them the American "commitment to the ASEAN region as a whole and individual countries to recognize its importance in delivering sustainable solutions." Commemorating 45 years of US-ASEAN relations, Mr Biden stated, "a great deal of the history of our world in the next 50 years is going to be written in the ASEAN countries".

During the 2021 US-ASEAN Summit, President Biden committed $102 million in new initiatives to expand its engagement with ASEAN on COVID-19 recovery and health security, fighting the climate crisis, stimulating economic growth, promoting gender equality, and deepening people-to-people ties. Building on this initiative, the two sides released a 28-point joint vision statement to raise their relationship from a strategic partnership to a "comprehensive strategic partnership." 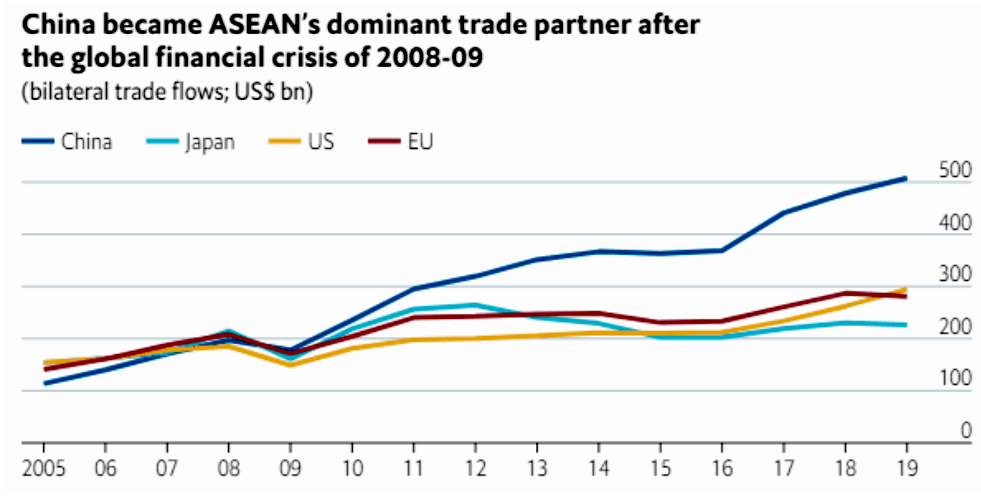 However, while efforts seem ambitious on the part of the US, there were several challenges, beginning with the absence of two ASEAN members. Only eight of the group's ten leaders attended the Summit. The Philippines is in the midst of a leadership transition, and Myanmar is a global pariah after crushing democracy once again. But that did not stop President Biden from extending an invitation to Cambodia's Prime Minister Hun Sen, who too wiped out any domestic opposition to his rule.

The military junta in Myanmar remains a sticking point in ASEAN cohesiveness. In his role as the current chair of ASEAN, Hun Sen has the dubious distinction of being the first foreign leader to visit Myanmar since the coup. It is concerning that under the Cambodian Chairship, ASEAN is opening its doors to the military junta while showing reluctance to engage with the National Unity Government (NUG) and other related parties. This is a direct contradiction to the Five Point Consensus, which calls for inclusive dialogue.

Mr Biden will find that some of his counterparts from Indonesia, Malaysia and Singapore share his frustration with the junta's intransigence and are open to isolating Myanmar's leaders and engaging the NUG. Along with Cambodia, there is also resistance from Vietnam, Laos and Thailand due to the longstanding norms within ASEAN that avoid interfering in the affairs of other members. While the joint statement did express both sides' concern about the situation in Myanmar and pledged to "redouble our collective efforts towards a peaceful solution in Myanmar that also reflects a continued commitment to human rights and fundamental freedoms, as outlined in the ASEAN Charter," the likelihood of a diplomatic breakthrough is dim. The reason for this is not just about regional instability but also Russian aggression in Ukraine.

The Russia-Ukraine war is threatening ASEAN's economic recovery from the pandemic. A protracted conflict in the European Union is showing a spill over effect to the region, hitting everything from trade to tourism. The European Union accounts for 9 per cent of ASEAN exports and more than 11 per cent for Vietnam and the Philippines. Foreign Direct Investment from the EU makes up 11 per cent of ASEAN's total. At the same time, the region faces risks from specific commodity dependencies. Considering Russia and Ukraine's role as major exporters of wheat and Ukraine's role in corn, the Philippines and Indonesia are vulnerable to agricultural supply shocks. Thus, due to the fear of collateral damage to ASEAN from the conflict and sanctions against Russia, leaders in the region are apprehensive about reprimanding Russian actions directly.

In the joint statement, the two sides referred to the Ukraine conflict and reaffirmed their "respect for sovereignty, political independence, and territorial integrity," but with no direct mention of Russia. With the exception of Singapore, no Southeast Asian country joined Western-led sanctions on Moscow. In fact, Indonesia, as chair of this year's G20 Summit, has indicated it will not disinvite Russia. Instead, as a compromise, it will also extend an invitation to Ukrainian President Volodymyr Zelenskyy. Maintaining formidable ties and protection provided by international law is the primary objective of ASEAN. The implication of this desire is not just international but more so regional.

Putin justified his invasion by saying Ukraine never had a tradition of genuine statehood. Considering many ASEAN countries gained independence less than a century ago, it is possible China could use a similar justification in the case of an invasion. It can forcibly take over South China Sea islets by simply claiming Malaysia and Vietnam never had a valid claim to them. Thus, Biden convening this Summit comes at a crucial time, with China increasingly asserting its presence in the region. As a bulwark against China, ASEAN countries seek US support. But while tensions have been building between the US and China, smaller regional countries are worried about being drawn into great power politics. The US is keen to assure that it remains committed to empowering the region alongside existing regional alliances such as the QUAD. But the question is, while the Summit hit all the symbolic notes, is Biden doing enough?

The problem with the American approach to the region is that, although ambitious, it has been substantively vague. In October 2021, Mr Biden announced the creation of an Indo-Pacific Economic Framework (IPEF) to complement Washington's security focus in that region. However, the IPEF is yet to be formally launched. Instead of resembling a traditional free trade deal with market access to participants, the IPEF comprises four "pillars" addressing clean energy, supply chains, anti-corruption, and fair and resilient trade. ASEAN countries are looking for a more active trade and investment agenda. The US is asking ASEAN countries to sign up to new rules regarding anti-corruption and high labour standards without market access, amounting to an all pain, no gain situation.

As opposed to this American proposition, China's tolerance for relaxed labour standards and willingness to work with corrupt local elites seems more appealing to ASEAN. China had previously pledged $1.5 billion in development assistance to ASEAN over three years for economic recovery from COVID-19 and public health. Alongside this, it has also made available billions in infrastructure financing under the Belt and Road Initiative. In comparison, the $150 billion pledged by the US to the region seems relatively smaller.